My sixteen blueberry plants make me happy, so I make them happy. (They made me happy this year to the tune of 190 quarts of berries, half of which are in the freezer.) I don’t know how much work bearing all those berries was for them, but I just finished my annual fall ritual of lugging bag upon bag of leaves over to the berry patch to spread beneath the whole 750 square foot planted area. 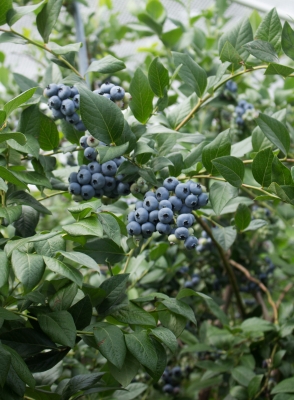 I don’t begin this ritual spreading until the blueberries’ leaves drop. Then, old leaves and dried up, old fruits are on the ground and get buried beneath the mulch, preventing any disease spores lurking in these fallen leaves or fruits from lofting back up into the plants next spring. Rainy, overcast summers or hot, dry summers or any weather in between — my bushes have never had any disease problems.
In past years, I did do two things before spreading that mulch. First, I spread some nitrogen fertilizer: my universal pabulum, soybean meal, at the rate of 2 pounds per hundred square feet. And second, I spread some sulfur, at about the same rate, to keep the soil acidic. After many years of mulching, the soil has built up an ample reserve of organic nitrogen — evidenced by the plants’ 2 to 4 feet of new stem growth each year. So I no longer add extra nitrogen.
With all those years of mulching, levels of decomposed and decomposing soil organic matter have greatly increased the soil’s buffering capacity for acidity. That means that I no longer have to pay such close attention to acidity, so I rarely add sulfur anymore. 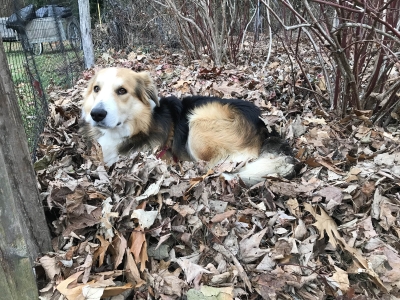 Besides all these other benefit, the mulch has created a soft root run that retains moisture, just what blueberries’ thin roots really like. Fruit is borne on shoots that grew the previous season, so each year’s vigorous new growth translates into a good crop in the offing for the next year.

Although the crop seemed paltry at first this year, by the time autumn came around, pawpaws were in abundance. This uncommon fruit is the northernmost member of the tropical custard apple family, and the fruit does indeed taste very tropical — a flavor mix of banana, mango, avocado, and vanilla custard — even though it’s easy to grow and native throughout much of the eastern U.S.. 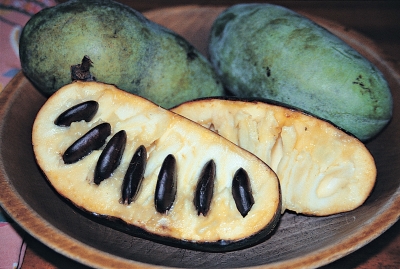 Two trees would be adequate for most households; I have about 20, just so I can learn more about them and their individual differences. That makes for a lot of pawpaws! (I test market most of them.) 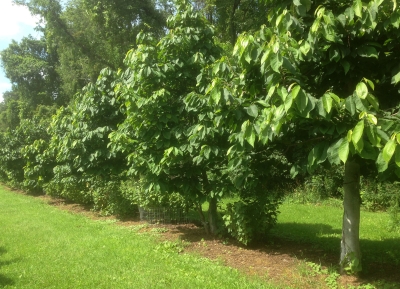 Pawpaw fruits are very variable in both size and flavor even among the branches of a single tree. One year, I tried thinning the fruits to see if that would increase size of remaining fruits, as it does with apples and peaches. Pawpaw has a multiple ovary so each blossom can give rise to as many as 9 fruits. The small fruits are hard to see because they match so closely the green color of the leaves, so I didn’t thin as many as I had hoped. That said, at season’s end, fruits on thinned clusters seemed no larger than fruits on unthinned clusters.
Beginning around the middle of September, I began harvesting the first fruits. I picked some up from the ground and picked some softening ones from the trees, all of which continued through October. By putting them immediately in a cooler at 40°F, I still had good fruit into the middle of November.

Every year I fear that at season’s end I’ll remember something I forgot to plant. This year it was scarlet runner beans. 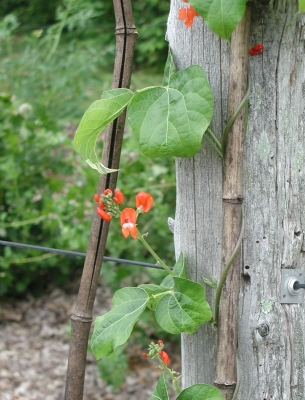 Despite the “bean” in the name, I’ve grown this vining bean, as do most people, primarily as an ornamental, for its scarlet blossoms. I occasionally eat the fat, hairy, yet delectable green beans.
Every year I collect some of the matured black and pale purple, calico seeds for replanting the following year. One year, I decided to cook up some of these seeds and taste them. Scarlet runner bean seeds are quite tasty (and, I learned prior to eating, nonpoisonous). 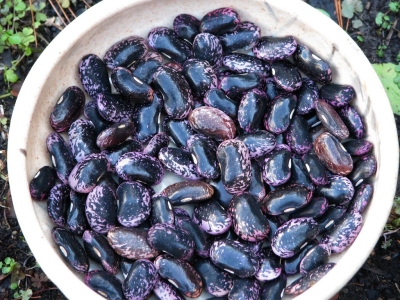