You are here: Home1 / Mohler

Every morning when I throw open the door to my Duckingham Palace (a name coined by vegetable farmer Elliot Coleman, for his duck house), my four ducks step out, lower their heads as if to reduce air resistance, and race to the persimmon tree. They trace a large circle around the base of the tree, scooping up any fallen persimmons and, still running, gulping them down quickly enough so no other member of the brood snatches it. 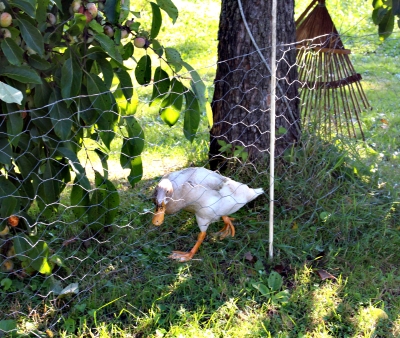 The circle is wide because of the low, temporary fence I’ve set up around the tree. Within the fenced area, I gather up most of the fallen fruit for myself. The ducks, can’t, or haven’t figured out how to, fly over an 18 inch high fence.
My tree is an American persimmon (Diospyros virginiana), native to eastern U.S. from Florida to northern Pennsylvania. Until they are dead ripe, most American persimmons taste awful, with an astringency that dries out your mouth. (As Captain John Smith, of Pocahontas fame, wrote, “When a persimmon is not ripe, it will draw a man’s mouth awrie with much torment.”) Some persimmons never lose that astringency, even when ripe, and here, in the northern reaches of persimmon growing, the season isn’t long enough to ripen most persimmons. 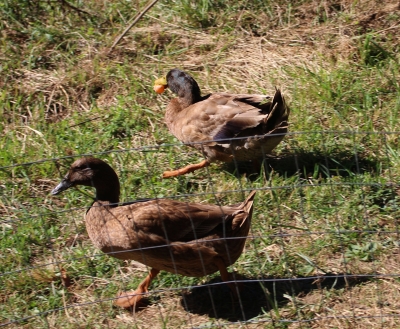 But good persimmons, when ripe, taste like dried apricots that have been soaked in water, dipped in honey, and given a dash of spice. Mine are selected varieties that ripen this far north, the first, Mohler, beginning in early September, and the second, Szukis, beginning in early October. (I grafted both varieties on one tree.) They also set fruit without the need for the separate male pollinator that most American persimmons require.
I highly recommend planting an American persimmon tree. Besides bearing delicious fruit, the tree is attractive all season long and shows off its pretty bark in winter. All this, without the need for spraying or pruning. (I wrote about American persimmon in my book Uncommon Fruits for Every Garden.) 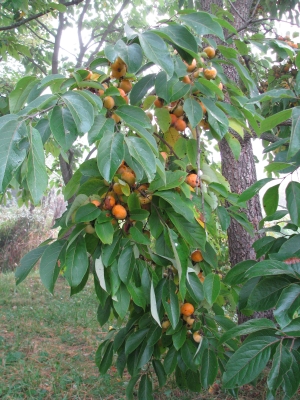 And the Winning Tomatoes Are . . .

As of this writing, tomato plants have not been killed by cold. But with cool weather and disease, they’re pretty much done for the season, bearing few or no fruits. That is, except for Sungold, the most tasty variety of cherry tomato. It just keeps pumping out ropes of orange fruits.
I grew over 20 varieties of tomatoes this year, all heirlooms, except for Sungold. My main criterion for planting any variety is flavor, which was very similar for certain varieties of tomato. They did differ in productivity, my second criterion for choosing a variety. So next year I plan to pare down the number of varieties I grow to the best tasting, most productive ones.
Topping that list will be San Marzano. Right off the plant, eating one is like eating bland cotton. Thrown into pot with a little water to prevent burning and simmered till soft, and the flavor morphs to tart, tomato-y richness. No wonder, canned San Marzano tomatoes are labeled as such in Italy.
Moving on to fresh eating tomatoes . . . Sungold, of course, with eight plants supplying enough for grazing outdoors and salads indoors. Anna Russian, Paul Robeson, and Red Brandywine all have excellent flavor and bore well and late into the season. Anna Russian is also quite good for paste.
Carmello and Valencia are good-tasting tomatoes, although not as good as Anna Russian and company. I’ll grow these two because they’re also very productive, and their fruits are almost perfect spheres. Many heirloom fruits are interesting for their convoluted shapes but sometimes I want just a standard issue, round tomato (that also tastes good).
One more possible variety is from seed a reader sent me a few years ago, a variety labeled Winterkeeper. The fruits allegedly store very well. The plants are still growing well; soon I’ll see how long into fall I’ll be eating tomato sandwiches. Ones I’ve already sampled have pretty good flavor.

Every time I walk back to the compost bin and see the volunteer tomato vine insinuating itself out of a gap in the slats of the bin, I’m reminded of the importance of crop rotation. This vine is still lush and green, and laden with perfect, red, pear-shaped tomatoes.
Sure, the vine could be healthy because its roots are running through the rich, brown compost within the bin. Perhaps the vine is so healthy because, as a random seedling, its genetics, by lucky chance, makes it so.
Most likely, this plant is so healthy and productive because it’s growing where no tomato has grown before. No disease spores linger there from previous crops of tomatoes. (The plant got a late start for the season, so its youthful vigor could also have a hand in its health.) 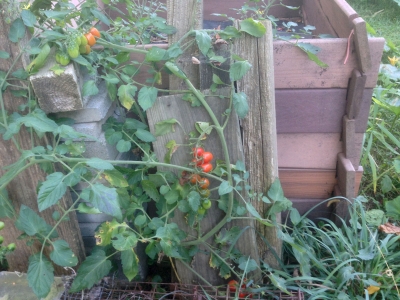 I rotate my tomato beds every year, but that only puts them 10 feet or so from beds of the previous year. That’s the problem with home gardens; it’s hard to get plants far enough away from where they recently were. Thorough cleanup and mulching help, but go only so far.
I have the luxury of two vegetable gardens separated by 50 feet of lawn, one of which hasn’t been home to tomatoes for over a year. Next year it will be.
The flavor of the compost-grown tomato? Good enough, not great.

Homegrown Persimmons, Popcorn, and Brussels Sprouts, All in Abundance

It’s raining persimmons! And every morning I go out to gather drops from beneath the trees. And every afternoon. And, depending on the wind and the temperature, sometimes early evenings also. 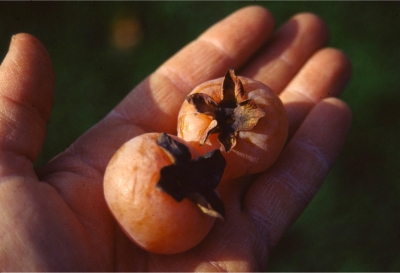 The fruits are delicate, their soft jelly-flesh ready to burst through their thin, translucent skins. Most fruits survive the trip from branch to ground unscathed because of the close shorn, soft, thick lawn landing pad that awaits them. I pop any that burst right into my mouth or else toss them beyond the temporary, fenced-in area as a treat to my the ducks or to Sammy, my dog who has developed a taste for the fruit. (The ducks, Indian Runners, hardly fly but Sammy, if he put two and two together, could easily hop the low fence and beat me to the fruits.) Repeatedly gathering fruit through the day is needed to keep ahead of scavenging insects. 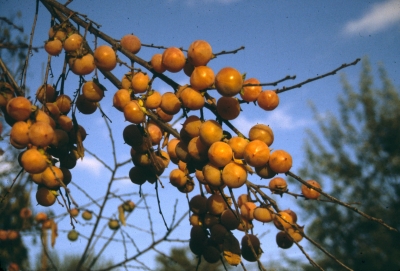 Szukis persimmons, ready to eat even from leafless branches

American persimmons grow wild throughout much of the eastern part of our country, about as far north as the Hudson Valley. Wild trees bear either female or male flowers. Males, which never bear fruit, can each sire a few females, which are the ones that do bear fruit. Puckery flavor is the main problem with wild persimmons. They can make your mouth feel like a vacuum cleaner is at work within. All American persimmons elicit that unpleasant feeling until fully soft, colored, and ripe; some elicit the feeling, in some measure, even when ripe.

Planting a named variety can spell the difference between a fruit to spit out and a fruit to swoon over. Said variety needs to be one that, besides tasting good, ripens within the growing season, and isn’t harvested until dead ripe. (Many otherwise good varieties do not have time to ripen this far north.) Szukis and Mohler do particularly well here near the northern limit for persimmon growing, Mohler beginning its ripening at the end of August, and Szukis the end of September. Both varieties ripen fruits over a long period, for a month or more.

One more asset for Mohler, Szukis, and some other varieties is that they make males superfluous. They can set fruit parthenocarpically (without pollination) and/or by pollination from their own occasional male blossoms. Most Mohler and Szukis fruits are seedless, a sign of parthenocarpy, but occasional fruits have a seed or two, indicating that some pollination took place.

Once leaves drop from these trees, fruiting is not finished. Ripe, orange fruits will cling for weeks to bare branches like Christmas ornaments, although, with time, fruits shrivel and brown, losing their visual — but not gustatory — appeal. Not bad for a tree that needs nothing in the way of pruning or pest control, eh?

Popcorn’s Not Just for the Movies

With the fruit course out of the way, let’s move on to the grain course. I’ve tried growing wheat and rice on a (very small) garden scale, and yields were paltry and sometimes difficult to get at because of topheavy plants flopping to the ground. Flopping was probably due to too much fertility and moisture. Processing either grain was a project in itself, entailing removal of the grain from the stalks and then from their husks.

The easiest grain to grow and process on a backyard scale is popcorn, which revels in my soil’s good fertility and moisture. I grow popcorn the same way as sweet corn, in “hills” (which, horticulturally speaking, are stations or clusters rather than raised mounds) with 3 to 4 plants per hill and two rows of hills in each 3 foot wide bed, with two feet from hill to hill within each row.

The only downside to growing popcorn on a small scale is the need to keep it away from sweet corn, if you grow that also. Planting sweet corn and popcorn too close to each other lets them cross-pollinate, resulting in sweet corn that is less sweet and popcorn kernels than wanly split to exhale steam rather than blow apart till they’re inside out.

Even with popcorn grown in sufficient isolation, correct moisture level (20 percent) is what makes for good popping. I wait to harvest until the ears and husks are dry on the stalks. After harvest, I peel back the husk, leaving a few layers, pull off the browned silk, then tie 3 or 4 ears together by their pulled back husks and hang the bunch from the kitchen rafters to dry.

The ears hang from the rafters all year ready for popping. When I feel like eating some popcorn, I just twist the kernels off a cob; microwavers can put the cob, intact, into their microwave ovens. I find that poppability varies through the year, probably depending on the temperature and the humidity.

If I sought maximum poppability, I could measure the moisture level by accurately weighing out a portion of kernels and drying them in a 150°F. oven overnight, then re-weighing them. But how big the kernels can puff up isn’t nearly as important to me as the fact that popcorn is an easy-to-grow, nutritious, whole grain that’s tasty and fun to eat.

The Sprouts Responded to Being Pinched

Finally, moving on to the vegetable course. A few weeks ago I wrote about sizing up the sprouts of Brussels sprouts by pinching the tips of the plants. That stops the production of the hormone auxin, which had been suppressing sprout growth further down along the stem. 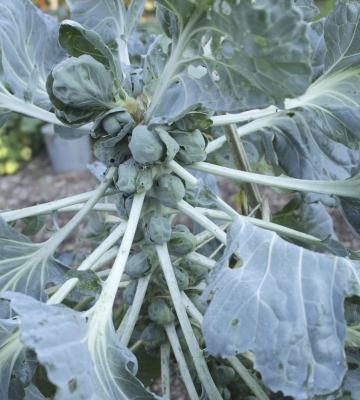 The suppression is only temporary. As uppermost buds start to grow, they, in turn, start pumping down auxin. Those 3 or 4 upper buds now threaten to expand to become stems. At this point they can do what they will because lower buds — the sprouts — have all puffed up to good size.