“Make hay while the sun shines” is fine advice in its season. For winter, how about? “Prune while the snow is high and firm.”

My apple and pear trees are semi-dwarf, presently ranging from seven to eleven feet tall. Even though I have a pole pruner and various long-reach pruning tools, I still carry my three-legged orchard ladder out to the trees with me to work on their upper branches. Sometimes you have to get your eyes and arms and hands right up near where you’re actually cutting. 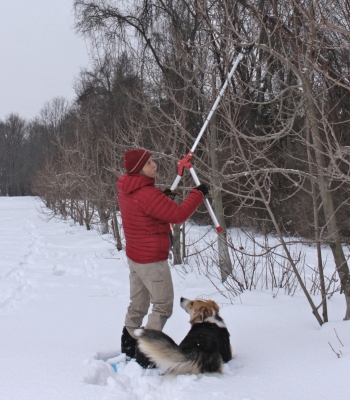 A few years ago, as I was looking out the window and admiring the foot or of snow on the ground, I realized that all that snow could give me a literal leg up on pruning. If I stayed on top of the snow, that is. While the snow was still soft, I was able to do this by strapping on a pair of snowshoes, which I bought, used, just for this purpose. (For travel through snow, I prefer to glide, on skis.) When the snow melted a little and then froze, the icy crust that formed was able to support my weight sans snowshoes.

In any case, when there’s a good depth on the ground, such as today, I gather my tools – minus the stepladder – and walk tall out to the trees.

Plants, like other creatures, have hormones, and a hormone (called auxin) in every plant generally coaxes uppermost portions to grow most vigorously. Which is why old apple trees become topheavy, with most shoot growth high up. The upshot of this habit is that most fruit is borne high in the branches, out of reach, and lower branches are shaded to become unproductive and prone to disease.

Ideally, then, the best place to start pruning is with the most vigorous branches, highest in the tree. That’s also the last place you want to start if you’re standing at ground level. Perched atop a good depth of snow next to my smaller trees, starting near the top was much easier.

If I get high enough (in the tree), I can imagine that I’m hovering above the branches, looking at them from the perspective of ol’ Sol, which is a good perspective for a grower of fruit trees. This allows a more objective perspective on which branches are going to be blocking light or otherwise cramping others for space. Letting more light and air in among the branches and, at the same time removing potential fruits with pruned branches, channels more of each tree’s energy into perfecting those fruits that remain. Remaining fruits are then healthier, larger, and more flavorful, especially for naturally larger fruits such as apples, pears, and peaches

The snow is a blank canvas that records some winter activities. My dogs’ footprints are obvious and telling. They are provincial in their travels, having beaten paths from their doghouses, where they sleep, to the driveway, where they greet humanity, and to the deck, where they lie in the sun. 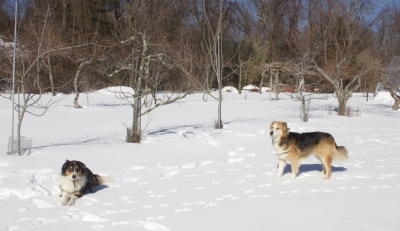 Daisy and Sammy at work

Less frequent are their forays out into the hay field to do their business and to see if anything interesting is creeping around out there.

The small, padded footprints of my cat hasn’t beaten out paths. The cat more randomly explores out-of-the-way nooks and crannies. She also likes to steer clear of the dogs, who consider her just another small animal worth chasing. 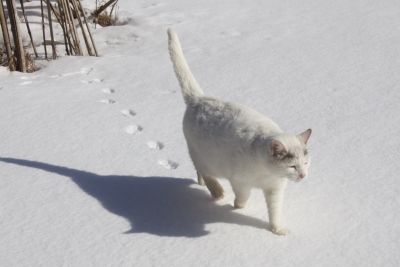 The distinctive footprints that I’m keeping the closest eye out for are those of rabbits and deer. Now, about when I typically delude myself that all danger has past, periods of warmer weather start coaxing rabbits to wander about and eye my trees and shrubs as food. Now is also when cottontail rabbits start reproducing, the first of up to five litters for this year, with a half dozen or so bunnies per litter! Very cute, but deadly to my plants.

This winter, a couple of deep snows either brought deer here or displayed their abundance with tracks in the snow. For the rabbits, who feed on young trees and low branches, I sometimes make up a spray of white latex paint, water, eggs, cinnamon, and hot pepper. That needs to be re-applied about now. Traps I set out for them are thoroughly and safely (for the rabbits) buried in snow. Perhaps I’ll dig them out and re-set them. 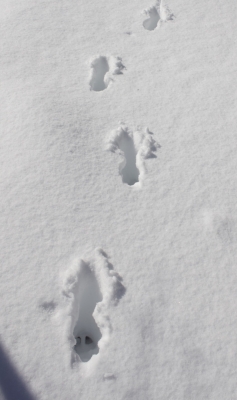 Deer tracks in the snow

No sign of rabbits – yet, at least – on those prunings as well as on tracks in the snow. Thank you Gracie (my cat).

The dogs’ are supposed to be keeping deer at bay, but do so only if they are out and about when deer are around. This year I’ve been relying on Bobbex repellent, which I spray monthly on branches that would be within reach of the deer. So far, the sprays have been 100% effective even on trees with deer tracks right beside them in the snow.

Get Ready for Spring

I will be hosting a WEEDLESS GARDENING webinar on Monday, February 22nd for $35.  It will run from 7-8:30 pm EST and there will be plenty of opportunity to ask questions. For details, go to www.leereich.com/workshops. Or trust me, and go right to registration (required) at https://us02web.zoom.us/webinar/register/WN_WqSCBtOGTqqjGgbOHOuxfg 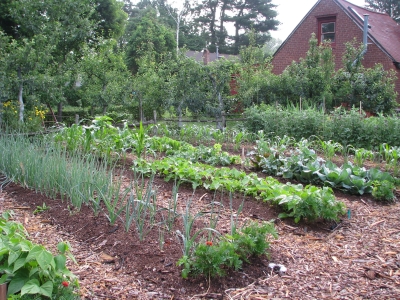 Is Gardening Too Easy?

Control yourself, Lee! Growing seedlings this time of year is too easy. Within a single packet of seeds  is the potential for a gardenful of vegetable or flower plants, even shrubs and trees. As such, a packet of seeds is relatively inexpensive.
I have envisioned delphinium in my garden, its tall, blue studded spires backed by the fence surrounding my blueberry planting. I could have just gone out and purchased a few potted delphinium plants, but I wanted a bolder effect so purchased instead a packet of seeds. Who would have thought that germination would be so good. After all, the seed germinates best when fresh and likes some cool temperatures to awaken; some people freeze the seeds in ice cubes for awhile before sowing them. I used nothing but patience, and not that much was needed.
I couldn’t bear to discard most of the seedling, so “pricked out” 24 of them into cells of my APS seedling flat. 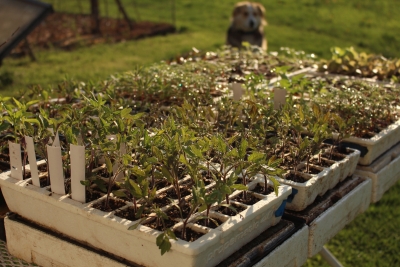 Seedling plants (and Sammy the dog) in spring

The same thing happened with red lupines, chocolate daisies, Yellow Gem marigolds, and . . .  Growing transplants is the easy part. The difficulty will be in about a month when I’m wandering around the garden, seedling flat in one hand, trowel in the other, wondering where to plant all these flowers. (This problem does not arise with growing vegetable transplants because I keep harvest records for vegetables that let me know how many plants I need of each. Could my eyes get too full or too fat on too many flowers? No.)

Raising transplants wasn’t always so easy for me. Decades ago, as a graduate student, I lived in a converted motel room which also became home to seedlings for my first garden. The shelves were lined with peat pots of sprouting chamomile (very easy), lettuce, beans, and other plants.
Thence was my abrupt introduction to “damping off,” a disease that attacks seeds and newly emerged seedlings. Imagine the disappointment of a beginning gardener (me) watching seedling stems pinch in at he soil line and topple over — the telltale symptom of damping off disease.
I soon learned that damping off was not uncommon, even among experienced gardeners. The disease is caused by any one of a few soil dwelling fungi  that raise their ugly head (figuratively) given the right conditions (for them). One obvious way to try to avoid the problem is to sterilize the potting media.
Most commercial potting mixes are sterile, as were the peat pots I was using. The problem is that the culpable microbes are everywhere, just waiting to attack when conditions are just right, conditions that I unknowingly provided for them in my motel room. The peat pots were excessively moist; the air stood still; and little light entered the room — perfect for damping off development.
Nowadays, my seedlings rarely experience damping off. The plants get off to a good start at temperatures they enjoy, bathe in light in my greenhouse or sunny windows (or, in the past, cozied up very close to fluorescent bulbs), and a fan keeps the air moving. I also add sufficient perlite to my potting mixes so that excess water drains feely down and out of the mix.
Years ago, soothing brews of chamomile tea would also come to the rescue — for the seedlings, not for me. That tea hasn’t been needed for a long time. I also don’t pasteurize or sterilize my potting mixes. Beneficial microbes, from the compost in my mix, and good growing conditions have thankfully made damping off nothing more than a distant memory for me.

Bigger creatures are still an ever present nightmare. Especially deer and especially after this winter. They have sheared the greenery from nearly every evergreen they could reach here, the hollies, arborvitaes (white cedar), yews, hemlock, and junipers (red cedar). 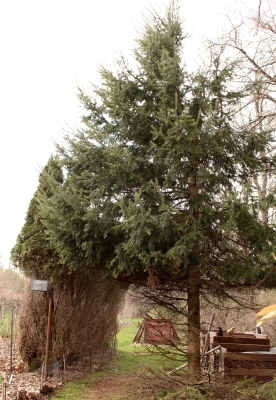 Interesting about the yews, because the foliage is toxic to many ruminants; a mouthful will kill a horse or cow within 5 minutes. Deer, according to most reliable sources, can feed on yew without ill effect. With that said, this past winter, I did find a deer dead on the ground near my yew bushes, which had been nibbled free of their foliage.
How about the plants; how will they fare, bare. Yew tolerates all sorts of abuse in the form of pruning. Soon, new needles will start appearing along their stems. Or, if the stems are cut back, new needled shoots will soon appear. My other evergreens should also fare well. Rhododendrons and mountain laurels, which the deer left alone, also generally sprout new growth when nibbled. So any of these so-called random-branching conifers or broad-leaved evergreens can be pruned to look prettier after deer have ravaged them.
Not so with so-called whorled branching conifers, such as pines, spruces, and firs. They generally do not resprout from bare wood, so there’s not much that can be done to prettify them now. Just lop back bare branches because they’re always going to be just that: bare.
For more about pruning evergreens, and other plants, see my book, The Pruning Book.