You are here: Home1 / voles

Warmer weather, even if it’s not all that warm, makes me feel like spring is just around the corner. The ground — in my vegetable beds, at least — isn’t even frozen, no doubt because water doesn’t linger long in the well-drained soil and because the dark-colored compost blanket I laid down in autumn sucks up the sun’s warmth.

So yesterday seemed like a perfect time to continue the garden cleanup that screeched to a halt when frigid weather struck, and some snow fell, a couple of months ago. Old cabbage heads that never quite ripened were laying on the ground like ratty, pale green tennis balls (with stalks attached). The four-foot-high stalk of one Brussels sprouts plant, stripped in autumn of its sprouts, stood sentry like a decrepit soldier in the same bed. 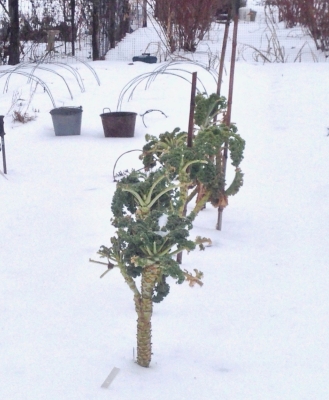 Of course, kale also still stood, except for those that flopped to the ground under their own weight. The latter were mostly the variety Tuscan (Lanciata). The Dwarf Blue Scotch plants, which I think taste better, stood more upright and compact, helped along, I’ll admit, with some bamboo stakes pushed into the ground next to them back in summer. I dug up the Tuscan kale plants and stripped yellowed and flaccid leaves from the Dwarf Blue Scotch plants. My guess is that by April they’ll be unfolding new, tasty leaves.

Stepping over to another bed, I twisted or coaxed out, with the help of my Hori-Hori knife, stumps from harvested lettuce and Chinese cabbage. A row of arugula in that bed showed enough life to awaken in spring with fresh, new leaves. I left it.

All this cleanup gets a jump on spring and removes debris that might harbor insect or disease pests that could infest or infect this season’s plants. The debris went into my garden cart and thence to the compost pile. The winter pile doesn’t heat up, so I’ll give the bacteria, fungi, actinomycetes, and earthworms two years to get their jobs done, killing off any “bad guys.”

Stepping over to the remains of the endive bed that I planted towards the end of last summer and began harvesting in October — what havoc has been wreaked!

The bed had been covered with a tunnel of clear plastic and row cover to provide extra warmth to the plants in cold weather. Extra warmth also to some furry creatures, it seems.

Taking off the cover, I saw a bed riddled with tunnels along with the scattered remains of unharvested endive plants. This has happened in the past; something about endive seems particularly attractive to the furry creatures (and to me), which I assume are voles, which are mouse-like creatures.

My garden must be vole heaven. The cat rarely hops the garden fence to hunt because she has to cross the DMZ zone to get to the garden, and she’s scared of our dog, Sammy. The compost-enriched soil has plenty of earthworm for good eating, as well as all the tasty, organic produce. So far, though, the voles have been satisfied with just the endive.

Short of planting the cat in the garden, which Sammy can’t enter, my plan is to do extensive trapping. One web site recommendation for a small garden is for twelve traps baited with oatmeal and peanut butter, or with apple.

As consolation, vole populations are said to decline after 3 to 5 years. It’s almost time, although the declined population might still be too many for me. And all is not bad with voles; they help stir the soil to distribute nutrients.

While in the garden, I also did some pre-season weeding. Creeping Charlie, which enjoys cool weather, is always sneaking in here and there once I turn my attention away from the garden.

All this garden cleaning and straightening up isn’t all for practicality. It makes the view of the garden each morning from my second floor bedroom window prettier.