You are here: Home1 / stewartia

Stepping down the two stones at one end of my bluestone wall, a friend looked up and asked, “Are you torturing or training this tree?” He was referring to the tree on one side of the the stairway, one long stem of which was arching overhead, held in that position with a string tied to a stone on the opposite side of the stairway.
“Training,” I replied. The stem was being coaxed into this seemingly submissive position both for form and function. Not to inflict pain. 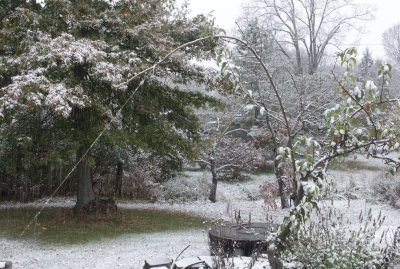 But first, something about this tree. It is an Asian pear, the variety Seuri Li that I created many years ago by grafting a Seuri Li stem on a semi-dwarfing rootstock (OH x F 513). It’s initial training was as an en arcure espalier. Deer found the young pear trees sitting high enough on the backfilled soil behind the wall a convenient smorgasbord; they didn’t even have to bend down to nibble at them. So the espalier became a deer-modified en arcure.
Seuri Li never bore as well as the other Asian pears — Yoinashi, Yakumo, and Chojuro — trained above that wall. Last year I lopped back one major stem of Seuri Li and grafted a stem of the variety Korean Giant onto the stump. The graft “took,” and fueled by the established root system, buds from the grafted stem soared skyward.
Growth from the graft was vigorous enough to start a large arch over the two stone stairway. A very big en arcure.

Training to en arcure entails bending the single stem of a young fruit tree over to its neighbor. Typically, a bud near the high point of the arch will grow out into a vigorous shoot which is then bent in an arch in the opposite direction, to its neighbor on the other side. The vigorous shoot growing from the high point of that second arch is trained back to the next tier of arch  of first neighbor. And so on, as high as desired.
The end result is a flat plane of adjacent trees decoratively linked as a living fence.
The fence might be considered functional, but the truly functional aspect of en arcure is physiological. Enhanced vigor of the highest buds can be traced to a plant hormone, auxin. Auxin, present in all plants, is synthesized in the uppermost growing points of a plant, either the tip of a vertical stem or the high point of an arched stem. But this auxin also puts the brakes, to some degree, on growth from buds below that high point.
Growing fruit takes energy, as does growing stems; more fruit means less stem growth, and vice versa. (Left to their own devices, plants more or less balance these needs themselves, although not always to our satisfaction, which is why you have to pluck off peach fruitlets so that a peach tree can pump more energy into the fewer — and resulting — tastier fruits that remain.) Bending a branch over quells its growth, coaxing it to divert more energy to making fruit — except for the uppermost bud, which puts out a vigorous shoot.
My plan, then, is to have that long stem of Korean Giant pear festooned with flowers in spring and fruits in autumn as it arches over the stone stairs. Plants don’t read plant physiology books and tow the line to all this theory, but I’m confident in a fruitful, decorative future for my plant because Asian pears generally are very eager to bear fruit.

Speaking of physiology, I wrote last week about the carotenoids, tannins, and anthocyanins that make autumn so warmly colorful, and especially so this year here in the Hudson Valley. A few plants, not commonly planted, are contributing boldly to that warmth.
•Japanese Stewartia (Stewartia pseudocamellia) earns its keep year-round, with rich, red autumn leaf color right now, bark mottled in hues of gray and brown in winter, and camellia-like flowers in early summer. 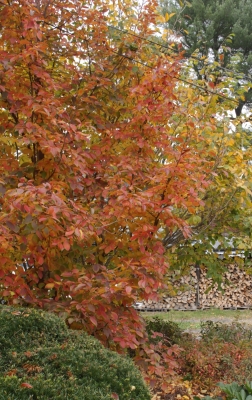 •Fothergilla (Fothergilla major) also earns its keep for much of the year, with bottlebrush clusters of fragrant, white flowers in spring and leaves that turn brilliant shades of yellow, orange and red in autumn. 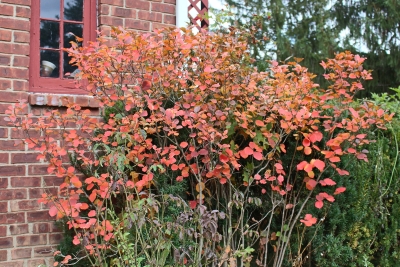 •Korean mountainash (Sorbus aucuparia) bears flat-topped clusters of white flowers in spring. In autumn, leaves take on a yellow color enriched with some brown and hints of red. Clusters of red fruits also ripen in fall. They’re small, but edible, a nice nibble. 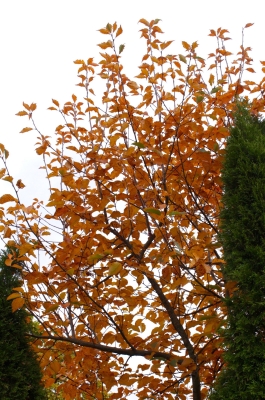 •Pawpaw (Asimina triloba) bears large leaves that have lost their summer-y, tropical look and have turned a clear yellow. The large fruits, also with tropical aspirations, have been ripe for a few weeks, with flavors akin to vanilla custard, banana, or crème brûlée. Take your pick. 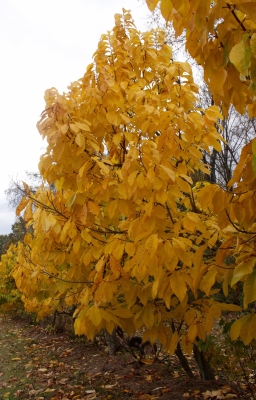 https://leereich.com/wp-content/uploads/2022/12/header-home-link-247x54-2.png 0 0 Lee Reich https://leereich.com/wp-content/uploads/2022/12/header-home-link-247x54-2.png Lee Reich2016-11-11 14:36:362016-11-11 14:47:12CHANGING STEMS, CHANGING LEAVES
The High Mowing Seeds giveaway is over and the seeds are on their way to the winner; but let’s have another giveaway! This time it’s a copy of my newest book, Grow Fruit Naturally. I’ll select randomly from all the comments offered by everyone who writes in as to what state they live in and what fruits they grow successfully and unsuccessfully, and what their favorite fruits are. The deadline for getting comments in will be Wednesday, April 3rd, at noon.

———————————————–
Philadelphia should not be called the “city of brotherly love.” No, I didn’t get mugged on a recent trip there. It’s just that more evident — to me, at least — is Philadelphia’s greenery. The city is oozing greenery, with over 10,000 acres of park land and hundreds of community gardens and small orchards right within city limits.
Philly’s more formal garden traditions harken back at least to the early 18th century. It was then, along the banks of Philadelphia’s Schuylkill River, that John Bartram, America’s first botanist, planted a garden from which notable American plants were distributed across the Atlantic. John traveled with his son William throughout the colonies studying and collecting plants, including Franklinia, a rare species that the father and son team came upon in the Altamaha River valley in Georgia. They brought seeds back to their nursery, trees of which are the source of all Franklinias in existence today. Franklinias have never been seen again in the wild since the Bartram’s last sighting.
But let’s get back to today’s city of horticultural love (Philahortica?). Trees seem to like it there. I’ve come upon majestic specimens of sycamores and weeping cherries, Korean mountain ash from which drooped fiery, orange fruits, and stewartia trees with sculptural, copper-red trunks. Last week, the weather there was warm yet the ground seemed to be covered with broad, thin expanses of lingering snow. No, not snow! Closer inspection revealed sweeps of pale blue crocus flowers just unfolding. This self-seeding, deer-resistant crocus species — Crocus tommasinianus, with the appropriate common name of snow crocus — seemed to be coming up everywhere.
————————————————-
During my three days in Philahortica, the plant that really blew me away was sarcococca, also known as sweet box. And how sweet it is. Walking down a sidewalk, I all of a sudden started sniffing the air like a dog. No flowers were in sight, but my nose brought me closer to a thick, green groundcover with tiny, cream-colored flowers tucked into the leaf axils. The aggregate effect of all those tiny flowers was a sweet scent barreling down from the bank of plants to the portion of sidewalk I was approaching. I have to admit that I was not at all familiar with the plant, having learned my plants in Wisconsin where Sarcococca and other evergreens are not cold-hardy, at least back when I lived there.
Already I’ve sited, in my mind, a home here for Sarcococca. This evergreen plant enjoys partial shade with moist, well-drained soils that are rich in organic matter, which are the same conditions enjoyed by many plants in the heath family (Ericaceae). I have a whole bed of heath family plants — including mountain laurel, rhododendron, lowbush blueberry, and lingonberry — along the east and north sides of my home. Sarcococca will look right at home sharing the bed with these plants when tucked right up to the brick wall of my house.
Among the species of Sarcococca, the one I’ll be seeking out in the coming weeks is the botanical variety humilis of S. Hookerana. Sarcocca is borderline cold-hardy in my relatively cold garden, and the variety humilis is a bit more cold-hardy than digyna, another botanical variety of the species. The brick wall should offer extra heat in winter and protection from drying winter sun and wind.
The path to the front door runs right along that bed and if everything goes as planned, I and others will be enjoying the sweet, sarcococcal fragrance as we walk along the path in two March’s hence.
————————————————-
Not that there’s any lack of fragrance around here this time of year. Outside, near that front walkway, witchhazel is in full bloom. Indoors, jasmine is coming to the end of its bloom period but the fragrant orchid, Ondontoglossum pulchellum is still going strong. Gardenia flower buds are fattening up next to my desk and, back outdoors, a whole bed of hyacinths are pushing up through the soil.
https://leereich.com/wp-content/uploads/2022/12/header-home-link-247x54-2.png 0 0 Lee A. Reich https://leereich.com/wp-content/uploads/2022/12/header-home-link-247x54-2.png Lee A. Reich2013-03-29 08:06:002014-07-14 15:17:16Philahortica & Yet Another Giveaway!!