You are here: Home1 / seed viability

“Ring out the old, ring in the new.” But not all the “old,” when it comes to seeds for this year’s garden. I’m flipping through my plastic shoeboxes (I think that’s what the boxes are meant for) of vegetable and flower seeds, assessing what old seeds are worth keeping and what new seeds I need to order.
Seeds are living, albeit in a dormant state, and, as such, have a limited lifespan. The longevity of any seed depends, first of all on the kind of seed, its genetics. Most seed packets come dated; if not, I write the date received on the packet.
Few seeds have as short a viability as parsnips. (No matter to me; I don’t grow them.) More astounding is the longevity of some seeds, especially the current record-holder for longevity, Silene stenophylla seed, possibly 32,000 years old, found buried in a squirrel burrow in the Siberian tundra. At the other end of the spectrum are seeds that remain viable for even less time than parsnip. The record at that end is probably held by seeds in the family Tillandsioideae, related to pineapple, with a viability of 4-6 weeks. Swamp maple, Acer saccharinum, seeds retain their capacity to germinate for only about a week.
It’s not worth the risk to sow parsnip, spinach, or salsify seeds after they are more than one year old. Two years of sowings can be expected from packets of carrot, onion, okra, pepper, and sweet corn seed; three years from peas and beans, radishes, celery, and beets; and four or five years from cabbage, broccoli, brussels sprouts, radish, cucumbers, beet, endive, melons, eggplant, tomato, and lettuce.
Among flower seeds, the shortest-lived are delphiniums, aster, candytuft, and phlox. Packets of alyssum, Shasta daisy, calendula, sweet peas, poppies, and marigold can be re-used for two or three years before their seeds get too old.

As with humans, genetics and lifestyle determine actual longevity, lifestyle, in the case of seeds, being storage conditions. So although onion seeds remain potentially viable for 2 years, I replace the year old, dog-eared seed packets in shoeboxes in my garage with new packets each year. 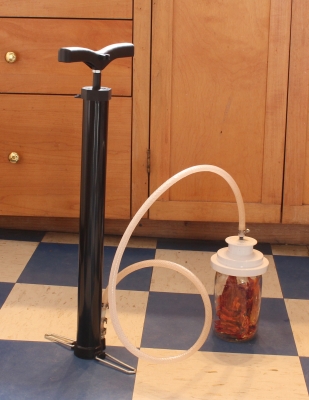 Conditions that slow biological and chemical reactions also slow aging of seeds, i.e. low temperature, low humidity, and low oxygen. All winter, my seeds find their low temperature and low humidity storage in my garage. Good for seeds. But come summer, my garage becomes warm and humid. Bad for seeds.
If my seed boxes could be kept well sealed, I could eke more sowings from a packet of seeds by lowering the humidity with a packet of silica desiccant.
Reducing oxygen levels has generally not been practical . . . until I came across plans for converting a bicycle pump into a vacuum pump (http://www.instructables.com/id/make-a-manual-vacuum-pump-for-under-$20-by-convert/). Going forward, my plan is to stuff some packets of seed into large-mouthed mason jars, then evacuate them with the reversed bicycle pump plugged into a “FoodSaver Wide-Mouth Jar Sealer.” I’d like to figure out some box I could make, modify, or buy in which I could more conveniently put my seeds, and then evacuate. Any suggestions?
I’ve already tried this on a number of mason jars of dried tomatoes, dried shiitakes, nuts, and beans. The vacuum is not very strong (0.74 atmospheres), but sucking out air also sucks out moisture. Some testing will determine just how it affects seed longevity.

So I don’t really know how viable my seeds are. One option is to order all new seeds each year. That could be very expensive. Another option is to guesstimate my seeds’ viabilities, taking into account their inherent longevity and storage conditions. That’s my approach, seasoned with yet another option: testing the viability of some of my seeds. 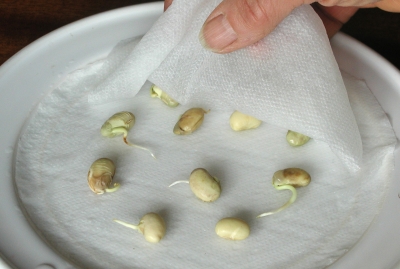 I test viability by counting out 10 to 20 seeds from each packet to be tested, and spreading the seeds between two moist rounds of filter paper on a plate. Enclosing the plate in a plastic bag to hold in moisture, and putting the bagged plate somewhere warm, preferably around 75 degrees, provides just about perfect conditions for germination. (Alternatively, place seeds on a damp paper towel, roll it up, bag it, and put it somewhere warm.)
After one to two weeks, germination occurs — if it is going to. Peeling apart the filter papers (or unrolling the paper towels) lets me count the number of seeds with little white root “tails”.
Seeds with low or no percentage germination got tossed into the compost pile. If the germination percentage isn’t too low, I’ll use the seeds and adjust the sowing rate accordingly.

A book giveaway, a copy of my book GROW FRUIT NATURALLY. Reply to this post telling us, if you grow vegetables, how you maintain soil fertility year after year, and how it’s working, or not, for you. Let us know what state you are in (as in NY, OH, CA, etc., rather than happiness, wistfulness, etc.). I’ll choose a winner randomly from all replies received by January 22nd.

https://leereich.com/wp-content/uploads/2022/12/header-home-link-247x54-2.png 0 0 Lee Reich https://leereich.com/wp-content/uploads/2022/12/header-home-link-247x54-2.png Lee Reich2016-01-15 10:05:452016-01-15 10:05:45TO SAVE OR NOT TO SAVE, & A FREE BOOK!
We’re now at the tipping point. No, not the global climate one after which our climate permanently veers off in a new direction. Nor a sociological tipping point that describes, for example, how many instigators are needed to create a mob action. Nor the biodiversity tipping point, the threshold after which biodiversity irreversibly plummets. This tipping point is more down-to-earth and not open to debate: buds on houseplant stems are poised to grow, seeds are ordered, and the sun is slowly rising higher in the sky and lingering longer each day.
I feel it and act accordingly. As soon as buds start to open on indoor plants, I’ll put a little fertilizer in with the water when I water them. Not the tablespoon per gallon per week that’s recommended on the packet label. The plants can’t use that much yet; any extra is wasted and contributes to salt buildup in the potting soil. I’ll start with only a teaspoon per gallon and offer it every other week, gradually increasing it commensurate with growth.

Generally, I don’t use soluble fertilizers. Outside, nutrients locked up within the compost and other organic materials I add to the soil is gradually solubilized by soil microorganisms. But compost and other organic materials are bulky so there’s no room to keep adding them in sufficient amounts for feeding plants growing within the confines of flower pots. Compost added to my potting soils provides sufficient food for seedlings and small plants that spend little time in pots, but houseplants spend their life in pots. Hence the soluble fertilizers that I’ll soon start adding to their water.
—————————-
As we’ve crossed the threshold to having longer days and brighter sunshine, some potted plants need more than just nutrients. Their roots have run out of space in which to grow. They need either to be moved to bigger pots or to have their roots hacked back to make room for fresh potting soil in the space that’s been freed up in their existing pots.

My weeping fig is the first candidate for re-potting. In its native, tropical haunts this tree grows a hundred feet high. As a familiar houseplant, it’s easily held in check at six feet high. My bonsai weeping fig tops out at only six inches high, and grows in an index-card sized, shallow pot an inch deep.
Every year the weeping fig gets its soil refreshed. Once I ease the plant out of its pot, taking care not to disturb the mossy mat that now covers the soil surface, I tease soil out from among the roots at the bottom of the root ball. After snipping back some roots and laying some new potting soil at the bottom of the pot, I return the plant to its home.
Larger, potted plants get more brutal treatment, especially my potted, edible figs, now in twelve to eighteen inch diameter pots. I’ll slice a couple of inches of soil from all around their root balls. But no need to do that yet; those plants are still dormant in the cold, dark basement
——————————
New seeds on their way by mail to welcome in the New Year provide an incentive to discard old seeds. Seeds are living entities, albeit quiescent, and eventually peter out. How long a seed stays viable depends on the kind of seed and the storage conditions, the ideal conditions being cool and dry (around 45°F. and 10% humidity). Consistent temperatures are better for storage than variable temperatures.
I used to store my seeds with a silica dessicant in airtight, plastic tubs in the refrigerator — perfect, but no longer feasible. These days, I have too many seeds so they have to make do in rodent-proof tubs in the garage.
Today I’m checking the date on each packet of seed, either written there by me or already stamped on the packet. The onion family has least longevity; I order new onion and leek seeds every year. Next in longevity comes the carrot family, which includes parsley, celery, fennel, parsnip, and, of course, carrot. Because my storage conditions are less than ideal, I also replenish these seeds every year. Under good conditions, these seeds, along with non-family members okra, beet, chard, pepper, and corn, would stay viable for 2 or 3 years. Seeds of tomato and eggplant, and cabbage and its kin, keep well for about 4 years, as do lettuce and legumes (beans and peas).
If there’s ever a doubt about seed viability, it’s easy to test germination by counting out, say, 20 seeds to put between the folds of a moist, paper towel. If the towel is kept moist on a plate covered with an upturned plate, any viable seeds should germinate within a week or so.
————————————–
Seeds readied and plants re-potted or fertilized, as needed, take advantage of the change in our planet’s orientation. We’re off to another year of gardening. This season’s tipping point is thankfully repeated every year.
https://leereich.com/wp-content/uploads/2022/12/header-home-link-247x54-2.png 0 0 Lee A. Reich https://leereich.com/wp-content/uploads/2022/12/header-home-link-247x54-2.png Lee A. Reich2013-01-11 16:02:002014-07-14 15:17:29The Tipping Point, Passed