You are here: Home1 / Odontoglossum pulchellum

Orchids are one group of plants I’ve regularly sidestepped. It seemed to me that if you grew orchids, you became crazed over orchids, to the exclusion of other plants. You then fill your home with as many of the over 20,000 species as you can cram onto your windowsills. I feared being led down that path.

My sidestepping took a turn into orchid-land 25 years ago when a local orchid enthusiast gave me a plant of Odontoglossum pulchellum, which I today learned has also been called lily-of-the-valley orchid. But more importantly today, the plant is in bloom. Blossoms from this plant are no rare occurrence; it’s bloomed every year for about the past 20 years, some years around now and other years waiting until February to unfold. 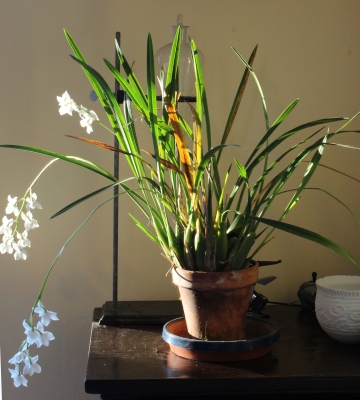 Odontoglossum pulchellum doesn’t sport knock-your-socks-off, traffic-stopping blossoms; instead, they have a soft, subtle beauty. Right now, delicate, arching flower stems rise up from clusters of torpedo-shaped, green pseudobulbs that are perched up out of the “soil.” Eight to 10 dainty, waxy, white blossoms line up along each flowering stem and waft a sweet fragrance, more like paper-whites than lily-of-the-valley to me, that transports me to spring.

I get all this for very little effort and without becoming orchid-crazy. For years, I didn’t know the name of my plants so couldn’t even look up how to grow them. Rather than pot them up in any special orchid soil, I merely mix an equal volume of wood chips from my outdoor pile into my regular, homemade potting soil, along with a bit of soybean meal for extra nitrogen. I keep the plants in a sunny window in winter and sometimes move them outdoors in summer, dividing and repotting the pseudobulbs to make new plants.

For this bit of effort, I get fragrant, white blossoms every winter, and they last for at least a month. Odontoglossum pulchellum is easy to multiply yet I’ve happily managed to restrain myself to keeping only 3 or 4 plants after I’ve divided and repotted them each spring.

Growing good celery demands a gardener’s greatest skill, and this year, in the greenhouse, I have the finest celery I’ve ever tasted or grown. The stalks are large, thick, juicy, even a little sweet. Unfortunately, I’m not sure I can take credit for this horticultural achievement. 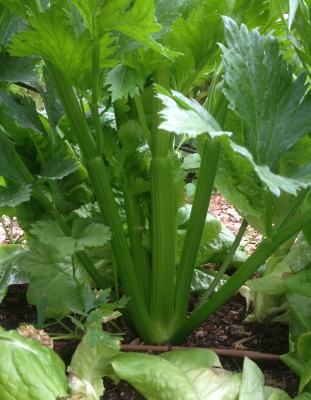 Ventura is an open-pollinated, rather than a hybrid, variety, which means that I can save my own seed for replanting each year. Beginning a few years ago, I’d allow one or two of the greenhouse Ventura plants that began to form flower umbels to do their thing and make seed, which they did prodigiously. I’d collect seed for planting the following season’s outdoor and indoor celery.

Some of those seeds would drop to the ground and germinate right in the greenhouse. These “volunteers” sometimes grew into seedlings as good or better than the plants I would later transplant back into the greenhouse.

So a couple of years ago I decided to let the celery self-sow freely in the greenhouse. Later in winter, I’ll transplant some of those seedlings into pots for eventual planting out in the garden.

In the greenhouse, I thin out excess seedlings, keeping the largest ones, which are already large enough for harvest. The stalks, especially welcome in winter, are, as I wrote above, “large, thick, juicy, even a little sweet.” I like to think I had a hand in horticultural achievement.

And Nothing To Do (For Now)

Nothing like a little snowfall to clean everything up in the garden. December 11th was the date of the first snow, followed by a second one on the 17th. The white blankets covered the pile of crocosmia leaves lying on the ground and waiting to be carted over to the compost bin, some weeds that sprouted in the mulched area beneath the dwarf apples, some of the smaller plants I haven’t yet cleared from vegetable beds, and numerous other messy distractions. The whole view was knit together in the sea of whiteness. 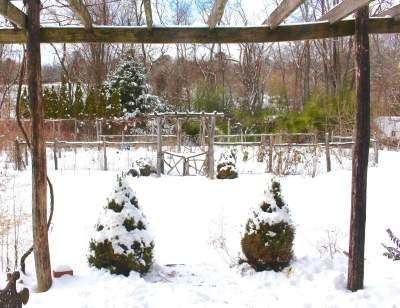 Spells of warmer weather and bright sunshine have eroded away some of the snow, mostly taking the fluffy, white lines and dots that rested atop fences and their fenceposts. The ground, as I write, is still pretty much covered in a white blanket. While I’m enjoying the wintry scene, I can forget about about the few odd jobs still left to do that are patiently waiting beneath the the snow.