You are here: Home1 / loquat

A Little Bit of the Mediterranean

The UPS guy arrived yesterday with a long, narrow cardboard box containing the latest addition to my menagerie, a menagerie of mostly Mediterranean plants. “Mostly” because not all of them have roots in the Mediterranean. But all of them thrive and are grown in Mediterranean climates of mild winters and sunny summers.

My collection is a “menagerie” because, although all the plants thrive and are grown in Mediterranean climates, the makeup is quite diverse. There’s the evergreen pineapple guava (Acca sellowiana that also goes under the common name feijoa), olive, rosemary, bay laurel, and Meyer lemon. 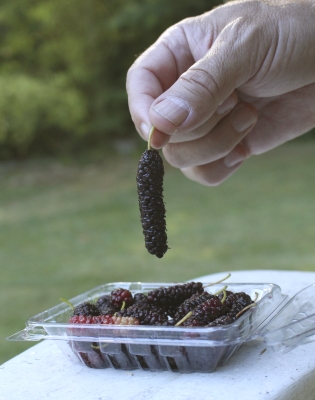 Here at the farmden, winter temperatures can plummet to minus 20°F, so getting these plants to thrive involves more than just giving them a nice, sunny spot in the ground outdoors. Except for the figs, some of which are in the ground in the greenhouse, all the others grow in pots. Every couple of years or more, depending on the plant, I slide a potted plant out of its pot, shave off some of its roots, and then put it back into its pot with some new potting soil. Stems likewise need pruning to keep a plant from growing too big and, in the case of fruiting plants, to keep the plant fruitful.

Potted plants spend summers basking in sunlight, just as they would in a Mediterranean climate. Come winter, they’re protected from frigid weather but kept cool, ideally 25 to 45°F. The winter home for the deciduous plants is in the dark of either in my walk-in cooler or my cold basement. Evergreen plants need light year ‘round, which they get in various south-facing, sunny windows in cool rooms. More light allows for warmer winters indoors.

If all this sounds like a lot of trouble, it is. So why do it? I like the way the plants look but, even more so, I like the way the plants taste, especially those that bear fruit. Thus far, my most successful Mediterranean fruit has been fig; black mulberry and Meyer lemon have borne pretty well; my harvest from pineapple guava and olive have been only a few fruits each year. Still nothing from the pomegranate.

Another -Quat besides Kumquat and Sunquat

The newest addition to my menagerie is loquat (Eriobotrya japonica), bearer of plum-size yellow or orange fruits. I’ve only tasted two loquats in my life, both from fruit stands at a market (Paris and Jerusalem); neither was anything to write home about. But I know from experience the superiority of home-grown fruits. And descriptions I’ve read that loquat’s flavor combines that of apricot and peach, or that of peach, citrus, and mango. would alone would warrant my giving this plant a
try. 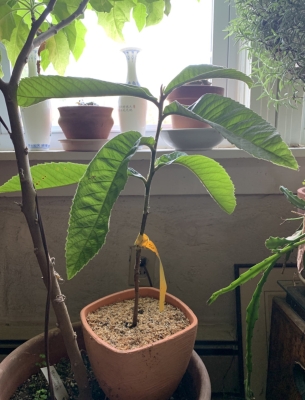 I’m also attracted to loquat for its several unique features. It’s a distant relative of apple, pear, and plum, yet it flowers in autumn and the fruits ripen in spring or early summer. The leaves, large, leathery, and dark green are ornamental enough for some gardeners in equable climates to grow this plant strictly as an ornamental. 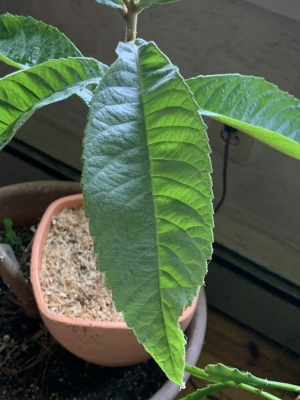 An attractive potted plant would do well to boost the eye appeal of my ragged collection of potted plants hugging sunny windows in winter.

Loquat’s small, white flowers emit a sweet and heady aroma — another plus — and are borne in clusters at the branch tips. Good to know when it comes to pruning: if I shorten too many branches, I’ll have to say good-bye to flowers.

As an evergreen, this plant will join other Mediterranean evergreens in winter at a sunny window in a cool room. Light through even a sunny window pales compared to outdoor sunlight at the same time of year. One source says that loquat tolerates a bit of shade. That’s hopeful.

From China, Around the World, and Now Here

Loquat’s botanical roots are in China. From there, it travelled to Japan where it evidently was a hit. The Japanese have been enjoying the fruits for about 1,000 years. Now the plant is widespread in climates where it can be grown. Because the plant is a little finicky about fruiting, with 26° killing the flowers, 24° causing developing fruits to drop, 19° killing unopened flower buds, and the whole plant dying at 12°. Add to that the plants’ not liking too much summer heat or wind. No wonder commercial production of this fruit is limited.

Looking at my loquat’s leaves, I feel almost like I’m looking at an old friend, or at least a close relative of an old friend. Yes! The plant reminds me of medlar (Mespilus germanica), a cold-hardy uncommon fruit that I’ve grown and enjoyed for many years (described in my books Landscaping with Fruit and Grow Fruit Naturally, and also in my, for now. out of print Uncommon Fruits for Every Garden). Besides similar leaves, both fruit at the tips of new stems growing off one-year-old wood. 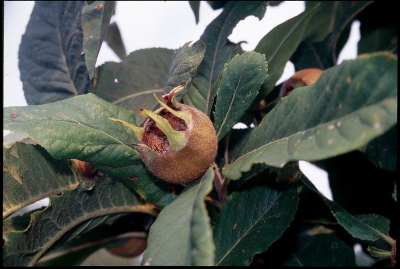 The fruit has even been called “Japanese medlar,” and the Spanish word nispero can mean either medlar or loquat. At one time, loquat was placed in the genus Mespilus, along with medlar.

My loquat, the variety Golden Nugget, does not need a pollinator and is allegedly “juicy, firm, meaty, and sweet.” And grafted trees (mine is) bear within 2 or 3 years. So I’m hopeful. If my Golden Nugget loquat is really flavorful it will earn a place, along with four in-ground figs, in the greenhouse, where the climate is truly Mediterranean.

After delivering a couple of lectures about gardening in North Carolina, I set off on a very short, whirlwind tour of the southeast, specifically North Carolina and Georgia, and ending with a stay in Charleston. How different from my spot here in New York’s Hudson Valley!

For all Charleston’s uniqueness, three characteristics jumped out. It being early March and my coming an achromatic landscape of snow, sleeping plant life, and cold, I was immediately struck by the abundance of greenery. Not the tired greenery of many evergreens here in the north, but vibrant, awake greenery in a variety of shapes, textures, and sizes.

Included in all that Charlestonian greenery were fronds of palm trees — saw palmetto and sabal palmetto — fanning out above jagged trunks. Those palms were a reminder that I was now in a subtropical rather than temperate climate. Not that the weather helped make the point; some days were in the high 40s and one night temperatures were predicted to dip near freezing.

March notwithstanding, Charleston had no dearth of flowers. Camellia blossoms stared out from a backdrop of their verdant foliage. Camellia is one of my favorite plants. I tried to grow one of the hardier new varieties of camellia a few years ago, offering it some cold protection by planting it near my home; it died its first winter. I wonder if southerners become blasé about these blossoms; camellias were growing everywhere, and in bloom.

The white blossoms of sweet osmanthus belied their diminutive size with the strength with which they perfumed the air. The fragrance was fruity, apricot.

Very different was another fragrance, this one wafting from clusters of trumpet-shaped blossoms dangling from the bare stems of edgworthia, also known as paperbush. That’s another plant that won’t grow this far north but no matter. I wavered between enjoying and not enjoying its resinous aroma.

If only gardenias — another plant growing outdoors in the southeast but not hardy here in the North— had been in bloom, the olfactory part of my trip would have been complete. All I could do was marvel at what it would be like if I could have a dooryard shrub of gardenia. I might be on the verge of passing out as I hyperventilated through the bloom season.

Two interesting fruits turned up here and there.

One was loquat, an odd relative of apple and pear. The leaves are large, dark green, and evergreen with a matte finish, all of which makes an appearance that is subtropical, which the plant is.

Most odd is loquat’s bearing habit. It flowers in autumn and ripens its fruit in spring or early summer. I once bought one at a fruit stand in Paris. Its flavor was unimpressive, but that’s true of many commercially marketed fruits. Loquats generally receive high praise for flavor. If I ever get to taste a good one, I might grow the plant in the loquat-perfect environment of my greenhouse.

The other fruit was citrus, two fruits, actually, and also “-quats” but not at all related to kumquat. They were kumquat and citrangequate. It just didn’t seem like citrus could be hardy that far north (except for the super-cold-hardy but hardly edible trifoliate orange, which I have growing outdoors). 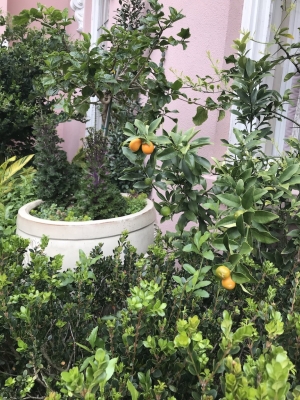 But winter low temperatures in Charleston rarely dip even to freezing but kumquat trees are hardy into the ‘teens. A few citrangequats — trigeneric hybids of kumquat, trifoliate orange, and sweet orange — that I stole from a tree proved to be tasty with sweet, edible rind enclosing a pleasingly tart interior.

Three of my favorite plants that I cannot grow were present in abundance. I already mentioned camellia. Another is southern magnolia, a stately tree that differs from northern magnolia in having very large, leathery, evergreen leaves that look somewhat like the rubber trees that are common houseplants. 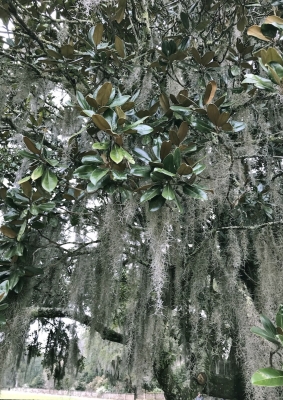 It was too early for the large, white, fragrant blossoms to appear but I would grow the tree for the leaves alone, if I could. It’s almost hardy here; I’ve seen trees in northern New Jersey.

Another favorite is a deciduous plant also almost cold-hardy here: crape myrtle. The plants are decked with bright flowers in various shades of red all summer, but are bare of leaves or flowers in winter, even in South Carolina. No matter, crape myrtle has a mottled, shedding bark that puts on a good show when its flowers are offstage.

And A Dark Cloud

A dark cloud that hangs over Charleston is its role in the slave trade. About 40% of all slaves entering America entered through Charleston. And it’s not just a statistic like this or a visit to the Slave Museum, site of one of Charleston’s many slave auctions, that recalls the horrors of human bondage. I couldn’t help, when visiting the plantations in and near Charleston, constantly reminding myself that they were only possible with the labor of enslaved humans. Reminders are everywhere; even the bricks of the buildings right in town were hand made by slaves.

Many of the slaves auctioned off in Charleston were separated from their families and transported to other sites throughout the colonies, making all the colonies and then states culpable.