You are here: Home1 / honeyberry

I bake really good bread, but “man can’t live by bread alone.” Sometimes, you’ve got to “stop to smell the roses.” Enough with the quotations! But back to the roses. 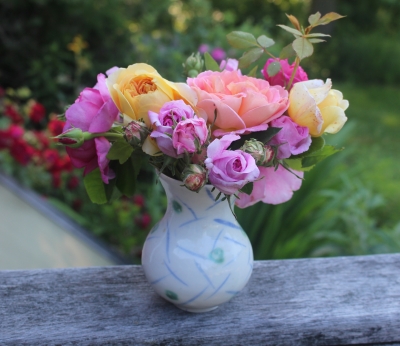 A love of roses has crept up on me over the years, due mostly to changes in kinds of roses available. Up until about 30 years ago, hybrid teas were pretty much the only roses on the block. These plants’ gangly stems are each capped by a vividly colored, fairly stiff, formal blossom whose petals wrap together into a pointy peak. You see where I’m going: hybrid teas are ugly, to me at least.

Then so-called species and old-fashioned roses entered the scene, roses that are as nature made them or only slightly hybridized. These roses constitute broad groups, but generally, what they have going for them are more subdued — think pastel — colors and more blowsy blossoms on more heavily branching, fuller-bodied, shrubs.

The downside to species and old-fashioned roses, even if you like their blossoms and their growth habits, is that many bloom only in the spring. Hybrid teas pump out blossom after blossom all summer long. 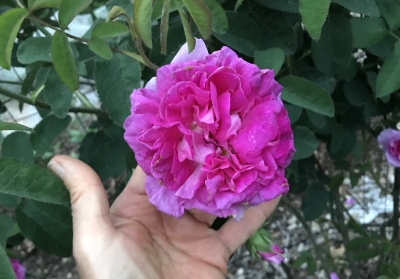 Enter Rose de Rescht, my first old-fashioned rose, given to me by a local, fellow gardener. Ann told me that this rose variety had soft pink flowers and heavenly scent. She was right about the appearance and fragrance, wrong about the name. After years of sleuthing, I’ve identified the rose as Rose d’Ispahan, probably originating in Persia but first discovered in a garden in Isfahan, Iran, renowned for its gardens and roses.

If I had to grow only one variety of rose, Rose d’Ispahan would be the one, for the beauty of its flowers, for its intense fragrance, for its cold-hardiness, for its lack of large thorns, and for its pest resistance. And that’s even though it blossoms only in spring. (It does so over a long period, though.) 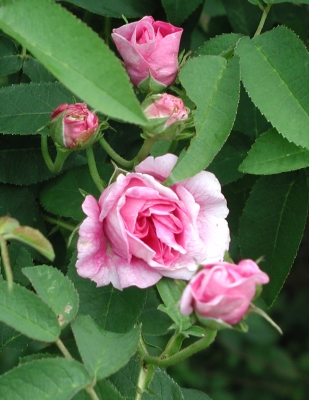 But I don’t have to grow only one variety of rose. My other favorites are some of rose breeder David Austin’s varieties which combine the pest resistance and repeat blooming of modern roses with the blowsy, fragrant, pastel colored blossoms and full-bodied shrubs of old fashioned roses. My currant, and perhaps all-time, favorites are Lady of Shallot and, in my opinion needing a more euphonious name, Golden Celebration. 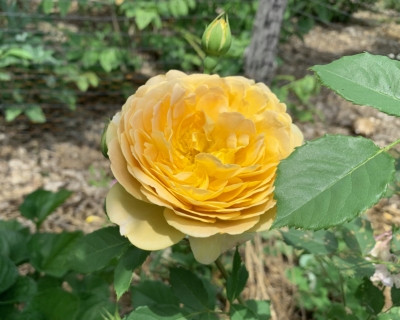 Both sport yellow — no, Golden! — blossoms, some apricot in those of Lady of Shallot, and a rich yellow, all contained in a petal-filled cup-shape in those of Golden Celebration. Another of my favorites, Lady Judi Dench, never woke up in spring a year ago; perhaps it was the cold, perhaps something else. 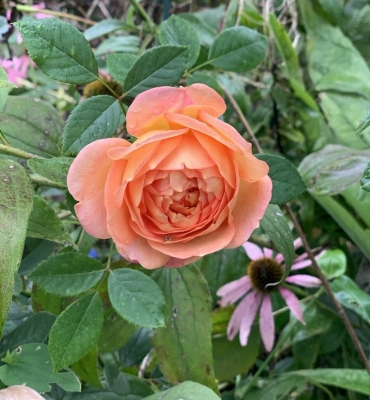 I also grow another David Austin Rose, LD Braithewaite, with deep red blossoms and dark green, slightly reddish leaves. Not my favorite as far as appearance but this rose is very cold hardy and pumps out tons of blossoms almost all season long. 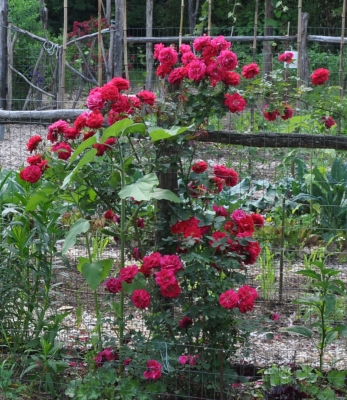 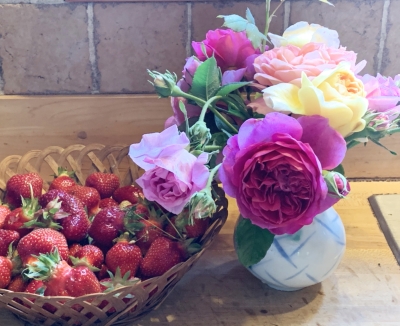 Why do I grow anything but the best? Because alpines are so small that it’s hard to fill a bowl with them. I grow vescanas, for the first time this year, because I never grew them before.

The Earliglow berries taste good and do quickly fill a bowl, ideally yielding one quart of berries per plant over the course of the season. Except this year, a problem has surfaced. Leather rot is a fungal disease (Phytophthora cactorum) that rears its ugly head — infected berries that taste bitter and have white patches that turn brown — usually following excessively wet periods from late spring to early summer, which is odd because weather has been on the dry side. Also odd because I’ve never seen the problem here before. 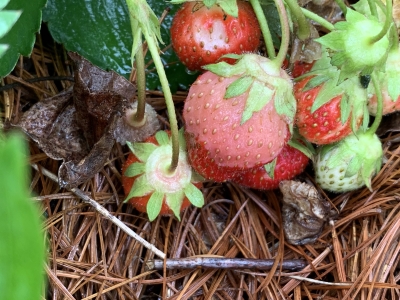 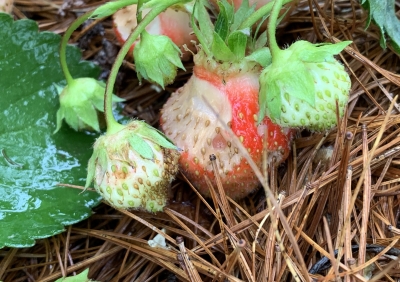 Which brings me back to vescana and Pineapple Crush. Both are very disease resistant, and vescana berries are almost as big as garden strawberries, so I’m thankful to have them, even if they do taste like canned strawberries.

And Honeyberries, Oh NO!

After three weeks of hanging on (the berries, not me), honeyberries, which are edible honeysuckles, are ready for a fair tasting. I wrote previously about the awful flavor of this new fruit and was instructed to let the berries hang till dead ripe. 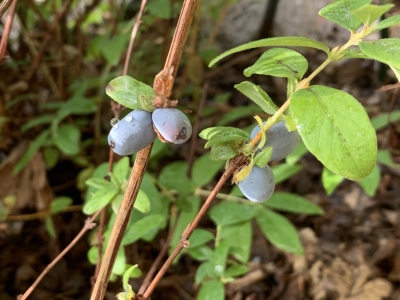 The berries sampled this year were so ripe that each had to be plucked from the branch with my palm facing upwards beneath the berry; a mere touch would cause ripe ones to drop.

Rat-a-tat-tat-tat-tat (a drum roll). First to be tasted was the variety Solo. Reaction: spit it out quickly. Tart with bad flavor. Second fruit tasted was Sugar Mountain Blue. Also spit out, but not quite as quickly. And finally, Sugar Mountain Eisbär. Although retained in the mouth and having a hint of sweetness, this one, like the others, had bad flavor.

The flavor of honeyberries is allegedly like a mix of blueberry and raspberry. Not so! If you have space, plant blueberries or raspberries instead.

A sad day here on the farmden: the end of blueberry season. Frozen blueberries, that is. Seventy quarts went into the freezer last summer, and a lot more than that into bellies, and now they’re all finished.

A happy day here on the farmden: the first of this season’s blueberries are ripening. These blueberries, and those that were in the freezer, are the large “highbush” (Vaccinium corymbosum) varieties commonly found fresh on market shelves. Also ripening now are “lowbush” (V. angustifolium) blueberries, growing as a decorative, edible ground cover on the east-facing slope near my home. 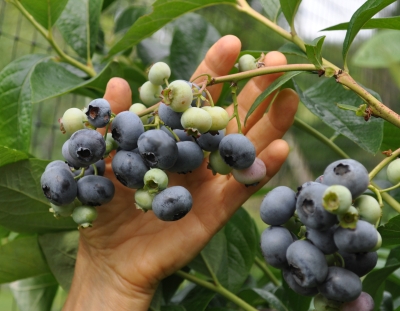 I’ve said it before but I’ll say it again. After many, many years of growing fruits in my not-particularly-good-for-fruit-growing site, blueberries — a native fruit — have always yielded well. Two most important things are adapting the soil to blueberries’ unique requirements, and keeping birds at bay. Birds at bay? Best is a walk-in, netted area. 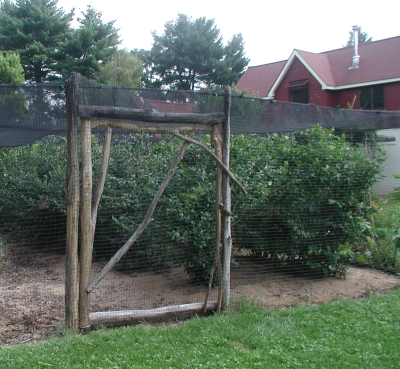 Soil for blueberries needs to be very acidic, with a pH between 4 and 5.5, made so, if needed, with the addition of sulfur, a naturally mined mineral. The pelletized form is best because it’s not dusty. Blueberry roots need good drainage and consistent moisture. They thrive in ground rich in organic matter, maintained with an annual three-inch topping of some weed-free, organic material such as wood shavings, wood chips, straw, pine needles, and autumn leaves.

(That’s the bare bones for success with blueberries. For a deeper dive into growing this healthful, delicious, reliable fruit, stay tuned for my soon-to-be-aired blueberry webinar.)

And More Berry-Like Fruits Coming Along

Just as last year’s apples were losing their crispness and tang and I needed a change from oranges, other berries, in addition to blueberries have started changing color, softening, and turning flavorful.

Black currants are another one of my favorites now ripening. They admittedly have an intense flavor not to everyone’s liking. But everyone likes black currants conjured up into juices, pastries, or jam. Variety matters. My favorites are Belaruskaja, Minaj Smyrev, and Titania. 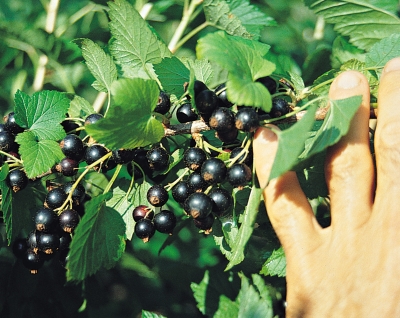 Don’t think black currants taste anything like “dried” or “Zante” currants. Those are raisins, originally made from “Black Corinth” grapes, a name then bastardized to “black currant.”

Like blueberries, black currants are easy to grow. But they have no special soil requirements, they fruit well even in some shade, and deer rarely eat the bushes, and birds rarely eat the berries.

Another tasty morsel now ripe is gumi (Elaeagnus multiflora). Birds usually strip this shrub clean of fruit, except this year the crop is so abundant that neither I nor the birds can make much of a dent in it. The berries are a little astringent if not dead ripe. And not at all if the fruit is processed; last year I cooked them slightly, strained out the seeds (which are edible), and blended it before drying it into a “leather.”

The gumi shrub itself has silver leaves, providing an attractive backdrop for the red fruits. The flowers are extremely fragrant, and the roots enrich the soil by taking nitrogen from the air (with the help of an actinomycete microorganism.)

Also now abundant, with plenty for all, is Nanking cherry (Prunus tomentosa), a favorite of mine for beauty and easy-to-grow cherries. The cherries are small, usually no larger than about 3/8 inch. But the single pit is also small. Flavor lies somewhere on the spectrum between sweet and sour cherries, very refreshing especially when chilled.

Another Chance, and Then Another

All is not rosy in the berry-size fruit world. Over the years, I had heard about and tried a new fruit in town, edible honeysuckles. In the past, the plants I tried either died over winter or bore very few, very mediocre berries. Since then, edible honeysuckles have come up in the world, with serious breeding work, and I was given the opportunity to try them again. (As Maria Schinz said, “Gardening is an exercise in optimism.”)

But first, what is an edible honeysuckle, which now goes under better names. If called “honeyberry,” it usually refers to Russian species such as Lonicera caerulea app. kamtshatica or edulis. Haskap is a Japanese name applied the Japanese species L. caerulea spp. emphylocalyx, or to hybrids of this species with Russian species. Pure Japanese species varieties are sometimes called Yezberry, after the Island of Hokkaido, called Yez or Yezo Island where they are found. The Japanese species and hybrids are less susceptible to spring frosts than the honeyberries.

This spring I planted out two Yezberry varieties, Solo and Sugar Mountain Blue. The small, blue berries ripen early, and I was eager to give this fruit another try. Solo is bearing. The taste? Awful! Sour, with no other flavor. 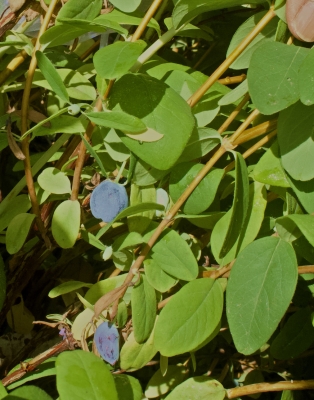 But I’m not abandoning edible honeysuckles. I’ve learned that the berries need to hang on the branches for a long time before developing full flavor and sweetness. A number of varieties are available, some of which are, according to others, “Delicious when eaten fresh from the plant” and “a bit like a cross between a raspberry and a blueberry. . . sweetness of a raspberry with a hint of pleasant tartness.” Really?!

Many blue berries are still hanging on my Solo bush. I’ll leave them to hang longer there and perhaps morph from “awful” to “delicious,” and will report back. I have hope for this new fruit, not yet high hopes.

At the very least, honeyberries or haskaps might be able to tide me over from the end of frozen blueberries to the first of fresh blueberries.