You are here: Home1 / hammemalis 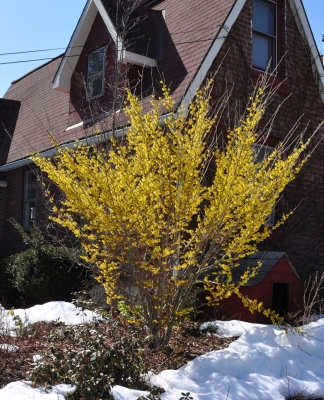 Witchhazel, a few weeks ago

Over the years, my Arnold’s Promise variety of witchhazel has earned its keep with branches showered in fragrant, golden flowers late each winter. Some years, like last year, part of the bush would blossom in autumn, then put on a repeat performance in late winter. (Branches that blossom in autumn don’t blossom again in later winter, but other branches, which hold off in autumn, do.)

I should have read the fine print more carefully before I selected this variety of witchhazel. My plan was for the plant to visually smooth the transition from the corner of the house to an upright stewartia tree to a moderate-sized shrub (Arnold’s Promise) to some subshrubs (lowbush blueberry) to ground level. Except that Arnold’s Promise has grown to 15 feet high. Which it’s supposed to do, according to the fine print. Which I didn’t read.

My job, now, is to bring the shrub to more comely proportions for the site, by pruning. Like other shrubs, witchhazels can be pruned by a renewal method, cutting to the ground the oldest stems and thinning out the number of youngest stems. The pruned plant, then, always has a spectrum of various aged stems, none of them too old or too overcrowded.

What makes an “old” stem for a shrub depends on its growth habit. For raspberries, two year old stems are “old,” so old that they die. And they make lots of young stems that need ruthless thinning out. 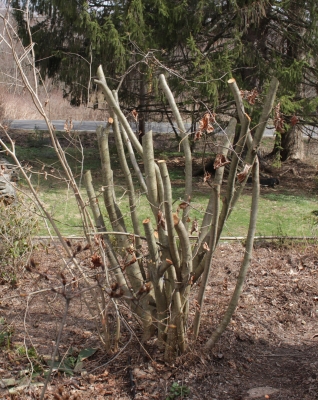 At first, I was going to renew Arnold’s Promise over the course of a few years, removing some of the oldest stems each year and hoping for younger replacements. That would let the shrub put on a nice show each year.

But once I get started pruning, restraint is difficult. I was tempted to  cut every stem, young and old, to the ground, then decide, as growth began, which young stems to save to build up the shrub again. I mostly did that, but saved a couple of small stems for a few blossoms this autumn or late next winter.

Especially this time of year, no matter what you do, you’re unlikely to kill a shrub by pruning. And, since they’re always growing new stems from ground level, even mistakes can be eventually corrected. (More about all this in my book, The Pruning Book).

A Reprieve For Arnold

Of course, I could kill Arnold’s Promise and plant a smaller variety of witchhazel, such as Little Suzie or Pallida. The latter’s flowers are reputedly especially fragrant. Then again, it reputedly grows 10 feet high — not that much smaller than Arnold’s Promise. Little Suzie, though, is billed at reaching only 5 or 6 feet tall.

For now, I’ll try pruning to cut Arnold’s Promise down to size.

I can’t leave pruning yet. Figs. These plants have a most interesting and unique flowering and fruiting habit. Some varieties bear on one-year-old stems; some on new stems; and some on both.

I was pleasantly reminded of all this as I stepped into the greenhouse and looked up at the couple of full-length stems I had left after last autumn’s pruning of San Piero fig. San Piero is one of those varieties that bears on both one-year-old and new stems. New figs, the size of a quarter were already getting plump way up at at the tippy top of the full-length stems. If all goes well, these figs — called the breba crop — will ripen in midsummer. 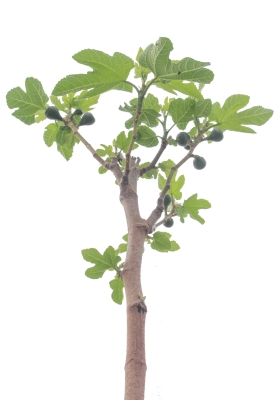 To reap that breba crop, one-year-old stems must survive winter weather. Which they do in my cool-temperature greenhouse, as well as where winter temperatures hardly dip below freezing. Where winters are cold, breba figs can be harvested from plants grown in pots and moved to a cool, but not frigid, location for winter, such as a barely heated garage or a mudroom (no light necessary). Or, in late autumn, stems can be bent to the ground and covered with plastic, to shed excess moisture, and then leaves, straw, or some other insulating material. Or, in even colder climates, bent down into a covered trench. (Fig trees are very flexible, literally and figuratively.)

My non-breba-forming figs and all except those few long stems I left on San Piero get drastic pruning. Everything, except for those one-year-old stems to save, gets pruned down to about 3 feet high. This pruning stimulates lots of new, vigorous shoots which bear the “main” crop, in late summer and on into autumn. Unlike apples, peaches, and other familiar fruits, main crop figs keep ripening over a long period, as long as the new shoots have enough light and warmth to keep growing.