You are here: Home1 / Gardener's Delight

My Green Thumb, or Not?

I wish I could say that my ever-greener thumb is responsible for the baskets overflowing with tomatoes and ripe red peppers in the kitchen, and strings of fat, sweet onions hanging from garage rafters.  Ripe figs hang lax from branches, a drop of honeydew in each of their “eyes” telling me they want picking. The season has been bountiful.

I can’t recall anything special that I did this season that would have boosted the harvest of so many different fruits and vegetables. The soil, as usual, got lathered with an inch deep layer of compost. Transplants and seeds got started with hand watering, then drip irrigation automatically quenched plants’ thirst from then on. I kept my usual eye out for insect or disease pests.

Sweet Italia peppers, like everything else, bore in abundance this season.

Further deflating my own gardening prowess is the fact that a lot of you readers also have experienced a season of bumper crops, right? (Not to wish ill upon your garden, but please tell me “no.”)

So let’s credit this season’s abundance on the weather. Rainfall was regular and sufficient up until August. Those periods of rain punctuated longer periods of intense sunlight in which plants no doubt reveled.

Temperatures also get credit. Very hot weather interfered with corn and pepper pollination last year; not so this year. Temperatures were neither too hot nor too cool all season long. Okra was the only vegetable complaining this year. Torrid weather is needed to keep those pods coming on. This summer, pods appeared on okra plants whenever the mercury soared, then the plants just sat, doing nothing, waiting out periods of cooler temperatures.

It’s time to render praise to a vegetable that has tasted and looked fresh and good all season long, every season, irrespective of the weather. That vegetable is mizuna, sometimes known as mustard cabbage or kaai ts’oi, or botanically as Brassica juncea or Brassica rapa nipponosica.

I sowed mizuna seeds along with lettuce and arugula seeds in the garden in April in a bed slated for corn planting later in June. Mizuna, lettuce, and arugula all provide greenery for early salads, enjoy cool spring weather, and are in and out of the garden quickly enough to be out of the way for a later crop such as corn. I pulled out these plants just before sowing corn — most of them. Arugula was anyway going to seed and the lettuce was soon to take a step in that direction. 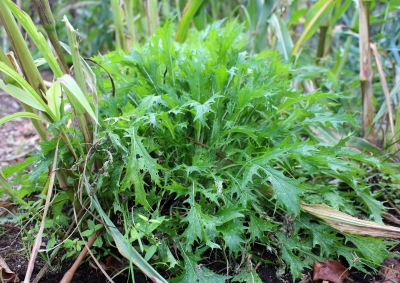 Mizuna, though, was still looking fresh and green so I left it in place.

As corn stalks reached skyward, mizuna kept its fresh appearance and tenderness of spring. That corn bed is now ready for harvest and mizuna is still tender and tasty. Most kinds of mustard greens would have tough leaves and have gone to seed months ago. After the ears of corn are harvested, my plan is to dig out the corn plants, carry them off to the compost, and leave mizuna to carry on until really frigid weather turns its leaves to mush.

Mizuna flavor is mustardy, but only mildly so. Taste it and it seems to ooze vitamins and minerals, borne out by analyses showing it to be especially rich in pro-vitamin A and calcium.

Did this season’s weather make for better-tasting tomatoes? Perhaps. Perhaps not. The main influences on tomato flavor are the amount of sunlight, the amount of water plants take up, probably plant nutrition, especially with respect to potassium and phosphorus, and — most importantly — the variety.

I’m happy with the taste of this season’s tomatoes but was eagerly awaiting ripening of the variety Gardener’s Delight. I grew Gardener’s Delight about 40 years ago and thought it was the best-tasting cherry tomato in the world. After not growing it for decades (other varieties got my attention), I grew it again last year, only to be disappointed in the flavor. That led me to wonder whether the apparent change in flavor was due to Fedco Seeds, the company from which I purchased the seeds, getting sloppy with their seed-saving, differing growing conditions (Wisconsin vs. New York), or whether I had become more discriminating in tasting my tomatoes.

As a test, this year I planted seeds of Gardener’s Delight from three sources: Fedco Seeds (www.fedcoseeds.com), Botanical Interests (www.botanicalinterests.com), a

nd Thompson & Morgan (www.thompson-morgan.com). The latter is a British seed company, the source  of the seeds I planted 40 years ago. Last week, to a drum roll (in my head), I tasted Gardener’s Delight tomatoes from each of the three sources. They all tasted the same — and not very good. Fedco Seeds was exonerated.

More specifically, the variety Sun Gold came on the scene more than 20 years ago (also introduced by Thompson & Morgan and now widely available). I think I speak for everyone in stating that Sun Gold is the best tasting cherry tomato ever. Gardener’s Delight may have been good in its day but it has been easily eclipsed by Sun Gold.

Whether the growing season is cloudy or sunny, or warm or cool (within reason), Sun Gold always offers a bounty of persimmon orange, delectable, sweet-tart tomatoes with bold flavor.

Two plants have been disappointments this year.

Goji berry (Lycium barbarum), the first, has been touted as a wonder food, effective for diabetes, high blood pressure, poor circulation, fever, malaria, cancer, erectile dysfunction, dizziness, and ringing in the ears, and for reducing fever, sweating, irritability, thirst, nosebleeds, cough, and wheezing. It’s also used — this Chinese plant has a long history of use in Chinese medicine — to strengthen muscles and bone, and as a blood, liver, and kidney tonic. Wow!

As amazing as this plant is purported to be, it’s easy to grow. Too easy, in fact, which is one of the problems growing it. Lanky, arching, thorny canes grow from the base of the plant, taking root wherever they touch ground. Turn your back on a planting it soon becomes a tangled mass of thorny canes.
But that must be worth it, considering the miraculous benefits of the berries, right? Like so many miracles, this miracle is pretty much unsubstantiated.
The flavor, then, must make the plant worth growing, right? Wrong. The berries taste awful. Worse, they taste poisonous. And, in fact, like other members of the deadly nightshade family, which does admittedly, include tomato, pepper, potato, and eggplant, goji does contain some toxins that cause adverse reactions in some people.
Still, if you believe in miracles and happen to like the flavor, goji is easy enough to grow and bears the first season, so may be worth growing. Not for me, though.
——————————————
Back in 1975. I wrote a short piece — my first garden writing, in fact — for Organic Gardening magazine about Gardener’s Delight cherry tomato. “It brings back the tangy flavor of [tomatoes of] a century ago,” I wrote (and it’s now a century and a quarter, and then some), “ . . . their tangy, sweet-tart flavor explodes in your mouth.”
Now, here in the 21st century, we have better tomatoes than were available back in 1975, mostly in the form of a lot of excellent heirloom varieties. And because of one relatively new, hybrid cherry tomato, Sungold, that tops all other cherry tomatoes as far as I’m concerned.
This year, after many decades without it, I decided to grow Gardener’s Delight again to see how it compared. The plants grew well and bore quickly. The fruits, however were awful, with mushy texture and bland, mushy flavor. “Blame it on the weather” would be a convenient explanation. In my experience, weather’s effect is not that significant on tomato flavor. My more discriminating taste buds? I don’t think so; the difference between what I remember (and wrote) and what I now taste is too great. 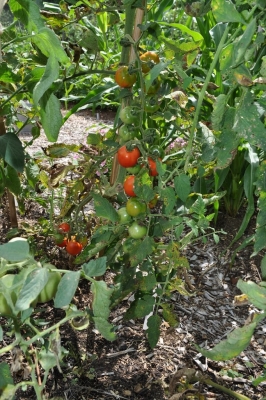 I feel bad, like an old friend has gone to pot.
One more explanation might bring hope. Gardener’s Delight is an open-pollinated variety. Whoever supplied the seed could have accidentally allowed some cross-pollination with another tomato variety. The tomato gets rave reviews from some web reports; other reports concur with me. I’ll try again, with a different seed source.
—————————————-
Every gardening season has it’s quirks, but this year has been the quirkiest yet, a perspective reflecting decades of gardening in four different states.
Oddly enough, the season started off being quirky by being so conventional, or, at least, by being what was supposed to be so conventional. That is, temperatures gradually and steadily warmed in spring, without intervening freezing or torrid spells.
Okay, cicadas were predicted. Still, they were strange and right here, at least, much more abundant than they were last time around, 17 years ago.  They’ve left a legacy of  browned ends of stems dangling from trees along roadsides. I look forward to not seeing that again for 17 years.
Japanese beetles are surely no strangers around here, making there entrance, as I mentioned a few weeks ago, just as the cicadas were making their exit. But the strange — and very welcome — quirkiness of this year’s beetle invasion is that it pretty much ended soon after it began. Stink bugs, likewise expected by now, have yet to make their entrance.
Perhaps this summer’s Japanese beetle quirk is related to the weather quirk. No, not the nice (for humans) spring temperatures which, being below ground, the beetles hardly would have noticed. Weather quirks included June’s incessant rainfall, more than twice the average, followed by July’s throbbing heat, more than 5°F above the average (which would have been higher had not the last week in July been so comfortable).
Another pest that hardly reared its head here was Mexican bean beetle, which I’ve battled for the past 20 or more years. The reason might be the biological sprays I tried, a mix of Entrust (derived from a bacterium collected from the soil of an abandoned sugar mill in the Virgin isles), Azamax (an extract from the tropical neem tree), along with commercial extracts of hot pepper and garlic. Dense bean foliage and my attempts to limit the sprays only to the bean plants made for less than thorough coverage, leading me to guess that something else might also be a factor. The weather again?
Another quirk: dragonflies. I’ve never seen so many of them as this year.
The final quirk concerns breadseed poppy, a self-seeding annual flower that has showed up reliably every year at various locations of its own choosing around my gardens and beyond. This year: almost none. My guess is that the reason has something to do with something I did. But what? Who knows?
The above observations are very casual and very local, mostly right here on my farmden along the Wallkill River in the Hudson Valley. I wonder: Cicadas notwithstanding, has anyone else experienced garden strangeness this year?
————————————–
https://leereich.com/wp-content/uploads/2022/12/header-home-link-247x54-2.png 0 0 Lee A. Reich https://leereich.com/wp-content/uploads/2022/12/header-home-link-247x54-2.png Lee A. Reich2013-08-15 16:59:002014-07-14 15:16:49Book Giveaway, Goji, and Gardener’s (Not) Delight