You are here: Home1 / flower longevity

It was with red rose in hand — a long-stemmed red rose — that Deb returned from a recent bridal shower. The rose was a party favor, the flower a welcome sight in the dead of winter. It found a home in a vase of water on the kitchen table.
After a week, the rose was still sitting on the kitchen table, its bloom looking as perky as the day it had arrived. After two weeks, still no change.
Okay, I’m sure that the vase was clean, the water fresh and initially warm (for quicker absorption into the stem), and that the base of the stem was freshly cut at a 45 degree angle just before immersion. All that, and the cool room, would make the blossom last longer. But that long? 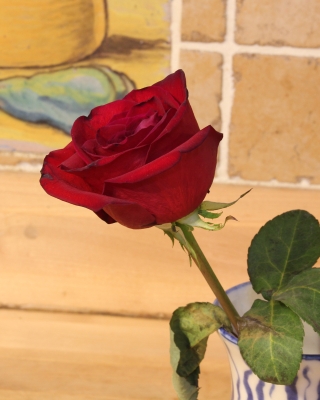 No special potions were added to the water. Like sugar, to feed the leafless stem and flower. Or an acidifier to make the water’s acidity more near that of the cell sap, stabilizing the flower’s color. Or an inhibitor to prevent microbes from running amuck. Such potions can be purchased or made at home by mixing: 1 teaspoon of sugar, 1 teaspoon of plain household bleach, 2 teaspoons of lemon or lime juice and a quart of lukewarm water; or mixing 2 parts water to 1 part tonic water (or non-diet lemon lime soda).
The problem was that the blossom was eerily too alive after a couple weeks. Without roots, sunshine, or leaves, the flower should have started dropping petals and looking generally forlorn. It didn’t, at least not quickly enough to exude that there was a life force within.
Contrast this behavior with that of the carnations (Dianthus caryophyllus) that blossom sporadically in my greenhouse through winter.  I cut the fragrant, pink blossoms, put them in a vase of water, and within a week they’re spent.
I’ve gained appreciation for the transience of cut blossoms. Their timely decline and death declare their aliveness.

Comparing roses and carnations may be like comparing apples and oranges.
Ethylene, a simple gas that’s also a potent plant hormone, comes into play here for its role in plant senescence, including that of cut flowers. Combustion, whether from a cigarette, an automobile engine, or a candle, produces some ethylene, as do plants themselves, especially when they are wounded or in their final throes of aging. 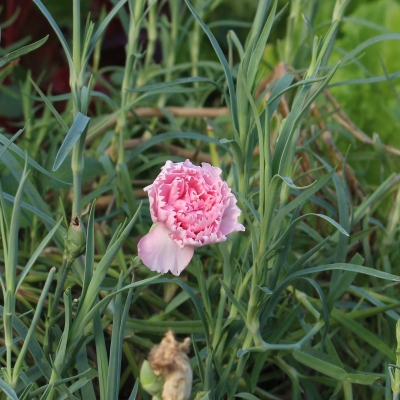 Carnations are among flowers, along with baby’s-breath, lilies, snapdragons, and most orchids, whose ethylene production ramps up as senescence begins. These flowers also are very sensitive to the effects of ethylene, which speeds aging, which generates more ethylene, which further speeds aging, which . . .
Roses, in contrast, are less sensitive to ethylene. (And ethylene plays no role in the decline of daisies, daffodils, and irises.) Also, as a commercial product, the long-stemmed, red rose that sat on my kitchen table could have been pre-treated with silver thiosulfate or aminoethoxyvinylglycine, both ethylene inhibitors.
No matter. I don’t require a whole lot of carnation blossoms, and new ones appear at a rate sufficient to replace spent ones, or, if slower, to increase appreciation for each new one.

In the Greenhouse, Out with the Old, In with the New

All winter, the greenhouse beds have been vibrant green with lettuce, arugula, celery, parsley, mâche, chard, kale, and claytonia. Just lately, the greenery has lost some of its vibrance. 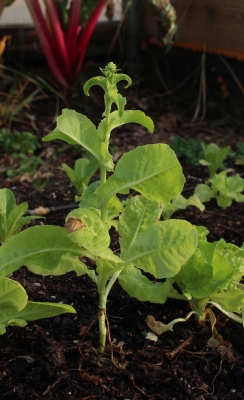 Planted in early fall, these greens grew to size — as hoped — to provide good eating through winter. Over the past few weeks, as days grew short and dim, and temperatures cooled, the greenery — as expected — mostly just sat still. In anticipation, I had grown them to size before the onset of winter. A bigger greenhouse would allow for a little something to be harvested from a lot of little, slow growing plants, enough for the daily fare. But the greenhouse is what it is.
And some of the lettuce plants, though not very big or old, are going to seed. It seems that lettuce transplants, rather than plants from seeds planted right in the ground, are more prone to this bolting.
Time for some fresh young growth: I pulled out some old and bolting plants, and sowed fresh lettuce, spinach, and arugula seeds. Growth will be slow for now; older plants should supply sufficient harvest until young’uns are ready for picking.