You are here: Home1 / celeriac

Because I’ve grown a number of varieties of blueberries for a long time, I’m often asked what variety I would recommend planting. Or whether you need to plant two varieties for cross-pollination in order to get fruit.

The answers to both questions are intertwined. First of all, blueberries are partially self-fertile so one variety will bear fruit all by itself. 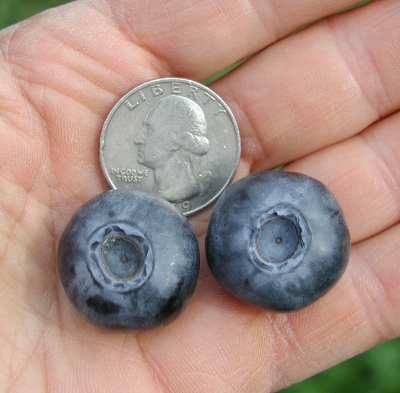 But — and this is important — berries will be both more plentiful and larger if two different varieties cross-pollinate each other. (Apples, in contrast, are self-sterile so, with few exceptions, won’t bear any fruit at all without cross-pollination.)

Benefits of cross-pollination aside, why plant just one variety of blueberry? Different varieties ripen their fruits at different times during the blueberry harvest season. With a good selection of varieties, that season can be very long.

Here on the farmden, the season opens with Duke and Earliblue, both usually ready for picking (in Zone 5) at the end of June. The season moves on, with Blueray, Berkeley, and Bluecrop ripening in July, and Jersey, Toro, and Nelson in August.

As I write, in September, the variety Elliot is still bearing ripe berries.

So if you’re going to plant blueberries, which I highly recommend doing, plant more than one variety, and choose the varieties that let you enjoy berries with your morning cereal or your after dinner ice cream over a long season.

I pay special attention to the soil when I plant blueberries, and it pays off. Blueberries have rather unique soil requirements among cultivated plants, demanding those that are very acidic, high in organic matter, low in nutrients, and consistently moist and well-aerated. (Most cultivated plants like soils that are only slightly acidic and have moderate to high fertility.) No matter if a soil is not naturally to blueberry’s liking; it can be made so.

The soil where I planted my blueberries drains well. If it did not, I would either choose a better location or else create mounds on which to plant.

Next in importance is soil acidity; I test it before planting. If it’s not at the required pH of 4 to 5.5, I spread pelletized sulfur, a naturally mined mineral, over the ground. (Pelletizing the sulfur makes it less dusty to work with.) 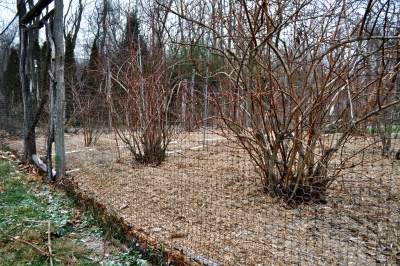 The amount of sulfur, per 100 square feet, needed to lower the pH by one unit would be a pound in a sandy soil and three pounds in a clay soil. My clay loam’s initial pH was about 6.5, so I needed 3 pounds of sulfur per hundred square feet to lower that pH to 5.5, that upper limit enjoyed by blueberries.

Now, for planting. I mix a bucketful of peat moss with the soil in each planting hole and then tuck the plants and soil into the hole, setting the plants slightly deeper than they stood in the nursery. Peat moss is a long-lasting source of organic matter, unique among organic matters in also being low in nutrients.

Right after planting, I spread a 2 to 3 inch depth of some weed-free, fluffy organic material, such as wood shavings, wood chips, straw, pine needles, or autumn leaves, as mulch. The mulch snuffs out weeds, which are more adept than blueberry at soaking up water and nutrients, and keeps the soil cool and moist, just as it is in blueberry’s natural habitats.

With regular watering, as needed, pruning, and annual mulching and attention to soil acidity, blueberry leaves should maintain a healthy, green color, and stems should grow a couple of feet or so each year. My planting of 16 plants yields almost 200 quarts per year of delicious, organic blueberries.

Blueberries have been a great success; now for a failure. Celeriac, a celery relative that puts that flavor  into its softball-sized, white root, isn’t well-known as a vegetable, but I’d like to grow it. I’ve tried, for the past couple of years, without success. The problem is some sort of celery blight that kills the top growth so there’s no greenery to feed the root.

Both early blight and late blight, fungal diseases, could cause problems. They arrived in gardens on infected celery seed and/or infected celery debris from the previous cropping season. 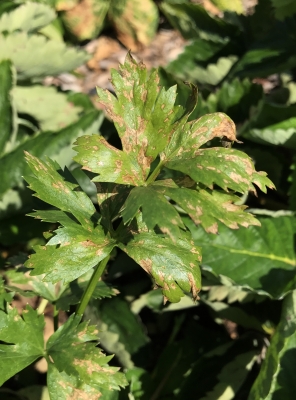 Last fall I thoroughly cleaned up diseased plants, even planted some celeriac this year in the greenhouse. Failure occurred both outdoors and in the greenhouse, although lots of rain and heat could have helped (the fungi or bacteria, not me).

I’m not giving up. Perhaps the seed is the problem. Seed can harbor the disease, but can be “cleaned” up with a heat treatment: 30 minutes at 118°F. As a last resort, I could spray an organic fungicide such as one of the organically approved materials based on copper or hydrogen peroxide. Perhaps this time next year I’ll be eating celeriac. 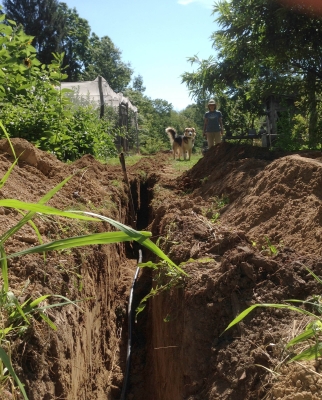 The saying that “April showers bring May flowers” notwithstanding, supplemental water is usually critical in my garden in April. Just a few days of sunny, balmy weather is enough to dry out the surface of the ground, just beneath which lie in waiting, for moisture, my newly sown seeds. Or recent transplants, whose roots have yet to venture out and down into the ground.
Once roots from sprouting seeds and transplants start growing in earnest, they’ll encounter plenty of residual moisture still sitting in the soil from winter’s rain and snow. Until then, I either have to carry watering cans (two cans at two gallons each) back and forth from the frost-free spigot against my house to the garden, or haul around hoses. The cans are top of the line Haw’s galvanized with good balance; even so, hauling water can get tedious, and the tendency to skimp a little on watering is unavoidable.
Fifteen years ago I installed a frost-free outdoor hydrant near my secondary vegetable garden. What a luxury! Problem is that to get water to the main vegetable garden I have to unwind a hose and thread it through the garden gate. And then, if temperatures drop below freezing at night, common in April, nothing can be done till ice in the hose has defrosted. Again, watering is too often inadequate because I’m avoiding all this hassle.
(Hot temperatures, dry weather, and plants feverishly sucking moisture out of the soil present no problem during most of the growing season — now, for instance. A few times each day, an inexpensive timer automatically opens a valve to let water flow through tubes to each vegetable bed and then out specially designed emitters to drip water into the ground at about the rate at which plants are drinking it up. But this automated, drip irrigation system can be damaged if put into service when temperatures drop below freezing.) 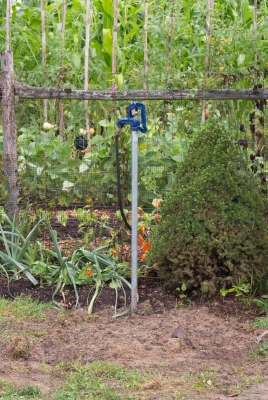 So today I’m digging tenches and holes for two new, frost-free hydrants to bring the source of water right next to the main vegetable garden and to my compost bins. In the future, I’ll have no excuse to skimp on watering.

Too may gardeners shove their gardens in a far corner of their property, as if the garden was an eyesore. (Which it often is.) I suggest locating the garden as close to the house as possible, given constraints of sunlight; six or more hours of summer sun, daily, is ideal. And make it ornamental, with fencing, a nice gate, and shrubs and flowers around and in it. Keeping it weeded also helps, as far as appearance and productivity.
There’s an old saying that “The best fertilizer is the gardener’s shadow.” Make it so that shadow conveniently falls on not only the plants but also spigots and compost piles.

Insufficient water in April could not be blamed for the poor showing of my celeriac plants. They weren’t even in the ground until early May, after the drip irrigation was up and running.
Celeriac is a nice addition to the variety of root crops that can be left in the garden until late into fall and then stored for the winter under cool, moist conditions. The flavor, which comes from the swollen root (actually a hypocotyl, which is the portion of the plant above the roots and below the stem), is akin to celery, but smoother. It’s a botanical variety of celery. 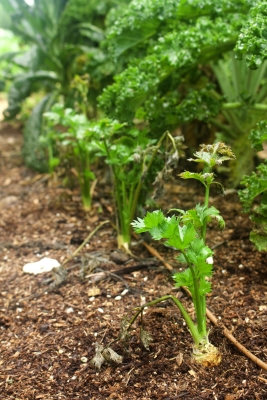 Last year, the first time in years that I grew celeriac, plants were stunted with nothing to harvest. Last year, I set the plants in a narrow bed on the west edge of the garden next to a full bed of tall corn. I blamed my failure on shade.
This year celeriac got a sunnier spot. Still, the plants are puny. Some of the plants share the bed with kale which has spread its large leaves to create more shade than expected. Celeriac, according to reputable sources, allegedly tolerates a bit of shade. 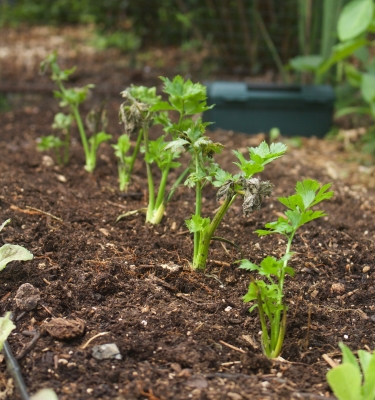 My plan is to slide a trowel into the ground beneath some of the puniest plants, lift the plants out of the soil, and plop them into more spacious, sunny environs.
Next year I’ll pay even closer attention to celeriac and expect a better harvest. (Then again, this season’s plants may be gathering energy, readying themselves to swell their hypocotyls as autumn draws near.) All part of next year’s even better vegetable garden, to which my new frost-free hydrant will be a serious contributor.