You are here: Home1 / carotenoid

As leaves are just starting to color up, the question is, “Will the autumn leaf show be good this year?” First off, whether or not it’s good, global warming has pushed showtime forward a bit each year. Around here, the peak of the show used to be the middle of October; nowadays it’s the third week in October. 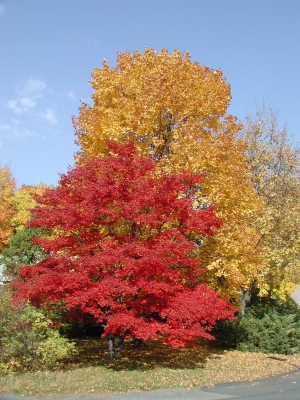 Back to predicting how good the show will be this year  . . . Throughout summer and into autumn most leaves are, of course, green, which is from chlorophyll. Chlorophyll must be continually synthesized for a leaf to stay green. The shorter days and lowering sun of waning summer are what trigger leaves to stop producing it, letting other pigments lurking there out of hiding.

The yellow and orange colors of leaves are always lurking there, thanks to carotenoid pigments, which help chlorophyll do its job of harvesting sunlight to convert into plant energy. I offer thanks to carotenoids for the especially warm, yellow glow they give to gingko, aspen, hickory, and birch leaves. 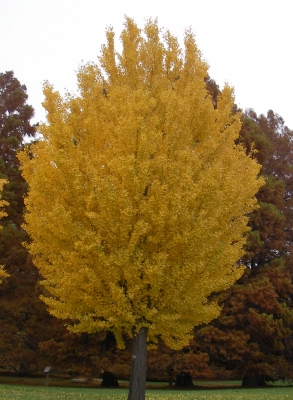 Tannins are another pigment, actually metabolic wastes, that all summer are hidden by chlorophyll. Their contribution to the fall palette are the season’s subdued browns, notable in some oaks and enriching the yellow of beeches.

Because leaves harbor carotenoids and tannins all summer long, nothing particular about autumn weather should either intensify or subdue their autumn show. The only glitch could be an early, hard freeze that occurs while leaves are still chock full of chlorophyll. In that case, cell workings come screeching to a halt and all that’s left are frozen, green leaves that eventually drop without any fanfare.

Autumn color also spills out reds and purples, most evident in red maples and some sugar maples, scarlet oak, sourwood, blueberry, and winged euonymus. Those reds and purples come from yet another pigment, anthocyanins. Except for trees like ‘Purple Fountain’ beech and ‘Royal Purple’ smokebush, whose leaves unfold dusky red right from the get go in spring and remain so all season long, in most leaves anthocyanins do not begin to develop until autumn. 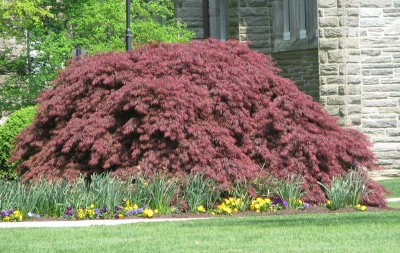 Anthocyanin formation requires sugars, so anything that we or the weather does to promote sugar accumulation in autumn will increase anthocyanin levels in leaves. Ideal weather conditions for sugar accumulation are warm, sunny days to maximize photosynthesis, and cool, but not frigid, nights to minimize nighttime burning up of accumulated sugars.

The many cloudy and rainy days for the past weeks don’t bode well for a great autumn show of leaf color. Less red because less anthocyanin is formed, and any that does form is diluted.

Our Hand in the Color Palette

Weather plays its part in autumn color but we can also have a hand in its development. One way is to ratchet up the reds and purples to make sure that leaves bask in light. I plant a tree where light is adequate (for that species) and, as necessary, prune so that branches don’t shade each other. Street lights don’t count as light, and actually have a negative effect, disrupting the signal that days are getting shorter and it’s time to slow chlorophyll production.

We also can ramp up the autumn show by planting trees genetically programmed for good autumn color. Among the most colorful-leaved trees and shrubs—which, besides those previously mentioned, include goldenrain tree, hickory, ironwood, black tupelo, and fothergilla—individuals within each species might pack a bigger wow than the others. Hence the spicebush variety ‘Rubra’, brick red in fall, or ‘Wright Brothers’ sugar maple, whose leaves become a mottling of gold, pink, orange, and scarlet.

Admittedly, the weather trumps (sorry) all.

(For more about some of the science going on behind the scenes in your garden, and how to put it to practical use, see my new book, The Ever Curious Gardener: Using A Little Natural Science for a Much Better Garden, from which the above is adapted.)

There’s another orange in the garden this autumn, and it’s not in the leaves or the fruit — the hardy orange — about which I recently wrote. It’s the osage orange (Maclura pomifera).

I grew my two trees from seeds extracted from a local osage orange I found on the ground. Each tree is about 25 feet tall and intimidating for their large, mean thorns. Trees are either male or female, so I lucked out, ending up with one of each, allowing the female to bear.

Why would I plant such a tree? For interest: This native of the midwest was, thanks to its thorns, a predecessor of barbed wire for containing livestock; also the primo wood sought after by Native Americans for their bows; and the wood is among the most rot-resistant of any tree.

The softball-sized fruit also is very interesting, with all its convolutions looking something like a green brain. Although related to fig and mulberry, it’s not at all edible. The fruit is claimed, without substantiation, to repel insects and spiders in and around homes. 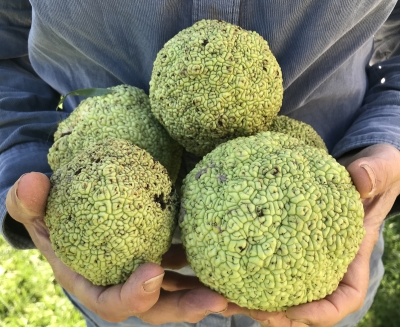 The bone dry weather blanketing the Hudson Valley and much of northeastern U.S. does have its saving graces. For one thing, it forces perennial plants to shut down and direct their energies to toughening up for cold weather lurking over the horizon. That’s a good thing — unless, of course, the soil gets dry enough to kill a plant. Deciduous plants have the option, before that happens, to drop their leaves, drastically reducing their water loss and needs.
This dry autumn weather is not unlike that in many parts of Korea. So what? When it comes to cold-hardiness, some plants that survive Korea’s frigid winters typically are done in by our similarly frigid winters. One plant that comes to mind is Asian persimmon (Diospyros kaki). The chances of an Asian persimmon surviving a winter here at my Zone 5 farmden and ripening its fruits are generally not good. Autumn weather like this year’s ups the odds. 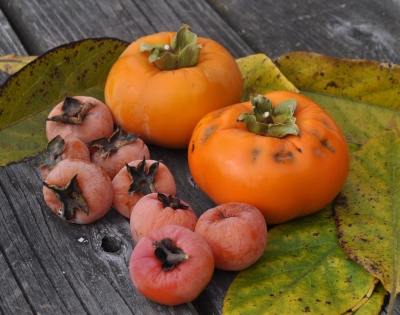 (American persimmons (D. virginiana), on the other hand, easily survive, and varieties such as Szukis and Mohler reliably ripen their fruits here.)
Survival of an Asian persimmon here is very topical to me because I planted one this past spring. I did plant one of the most cold-hardy varieties, Great Wall. This variety is allegedly hardy and will ripen fruit in Zone 5 (at least that’s what Lee Reich wrote in the book Uncommon Fruits for every Garden). This autumn weather should help get it through its first winter here.

This bone dry weather has also made for glorious autumn leaf colors, even more than usual. Did I write, last year, that autumn color was the best ever, and the year before that, and . . . ? The reason for the exquisite color is physiological (the leaves’, not mine).
Leaves can, of course, be green. Other colors also figure in, obscured by the green of chlorophyll until autumn’s cooler weather and shorter days dissolve away the chlorophyll to let these other colors strut their stuff. Autumn’s fiery oranges and yellows, especially prominent in sugar maple, gingko, aspen, hickory, and beech, are from carotenoids. Tannins are another color component that get expressed in autumn; they give oaks their brown color, and enrich the yellow hues of beeches and hickories.

Unless an early freeze burns off trees’ leaves while they are still green, those oranges and yellows and browns put on a reliable show every autumn, no matter what the weather.
Not so for the reds and purples of autumn leaves. These colors are expressed by anthocyanins, compounds which are not present or obscured by the green of chlorophyll during the growing season. Anthocyanins develop in autumn, and they need sugars for their development. Sugars come from photosynthesis, whose driving energy is sunlight.
So, less rain and more sunny weather means more photosynthesis, more sugars, and better red and purple color in such plants as blueberry, sourwood, scarlet oak, and sugar maple. A recent spate of warm days and cool nights enhances the whole effect, the warm days spurring photosynthesis and the cool nights slowing respiration to slow “burning” of sugars.

But How About Some Rain?

Much as I revel in day after day of clear, sunny weather and trees alive in color, I’d like a few heavy rains. The water supply of many homes on my road tap into shallow groundwater, the level of which is very low at this point.
Also, my drip irrigation system has been disconnected. The timer, the pressure reducer, and the filter, all of which must greet water as it comes out the spigot, before it enters the main lines, have been brought indoors to be protected from the recent freezing temperatures.
With reduced transpiration from cooler weather, autumn’s usual rainfalls can carry winter radishes, endive, Chinese cabbage, and other cool weather vegetables on a few more weeks until the end of the season. But we need these usual rains.