You are here: Home1 / blackcaps

It’s a bumper year for blackcaps (also know as black raspberries or, botanically, Rubus occidentalis), at least here on the farmden. Up to last year, we harvested wild blackcaps from plants that pop up at the edges of woods. The current bountiful harvest is from blackcaps that I planted a couple of years ago. Last year’s harvest was unimpressive because the plants were still settling into their new home. 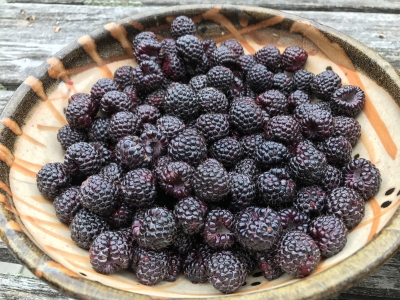 Most blackcaps, like many other bramble fruits, have biennial canes that grow stems and leaves their first year, fruit in early summer of their second year, then die back to the ground. (Annual harvests are possible because while those second year canes are fruiting and then dying, the perennial roots are pushing up new canes, which will bear the following year.)

Niwot and Ohio’s Treasure, the two varieties I planted, stand out from the crowd in bearing on new, growing canes as well as on two-year-old canes. Their two-year-old canes, like those of run-of-the-mill blackcaps, bear now, in early summer. Berries are borne on new, growing canes towards the end of the growing season, until stopped by cold. The next season’s summer crop is borne lower down on those same canes. The upshot of all this is that I get to eat fresh blackcaps in early summer and then again in late summer.

I knew I could expect two crops each season from these varieties when I planted them. That’s why I planted them. What I didn’t know is how abundant and flavorful the berries would be. Unfortunately, for the purposes of evaluation, the two varieties are growing in separate locations that differ markedly from each other. The one in the better location — a humus-rich soil basking in abundant sunlight — yields oodles of large berries. The other variety — planted in a weedy bed shaded from the east by a greenhouse wall — yields less and smaller berries, with perhaps a tad better flavor.

Pruning Niwot and Ohio’s Treasure is as important for ease of picking and pest control as it is for other brambles. And it’s easy.

Right after the current crop grinds to a halt, I’ll cut every cane that bore fruit right to the ground. These two-year-old canes are going to be starting to die anyway. I could cut them down in winter, but cutting them sooner gets the thorny canes out of the way of late summer harvest. 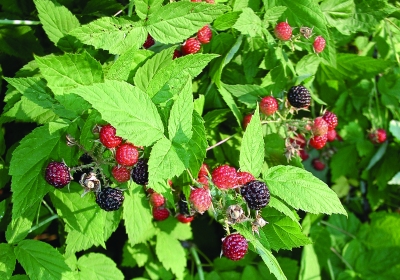 All summer long, I’ll also pinch out the growing tip of any new canes when they reach about four feet in height. Pinching induces side shoots, on which fruits are borne.

That’s it for summer pruning. Sometime next winter I’ll reduce each clump of canes to the six healthiest and shorten each side shoot on remaining canes to about 18 inches long.

All in all, Niwot and Ohio’s Treasure yield a lot of delicious fruit over a long period of time for minimal effort. Now, if only the canes were thornless.

For roses that bear only once each season, such as the heavenly scented Rose D’Ipsahan, or the cheery, lemon-colored blossoming Father Hugo’s Rose, I cut back some very old stems right to or near ground level, and shorten the remaining stems, some by a quarter of their length, others by three quarters of their length. Then I go over the bush to thin out any crowded stems. This pruning makes room for and stimulates growth of new shoots with ample time for them to initiate flower buds this summer that will unfold next spring.

Repeat blooming roses get pruned differently. The goal is to cut off stems with spent flowers and coax new growth that will flower this season. Instructions for pruning hybrid tea roses are very specific; and I quote: “. . . . cut the stem back to a five-leaflet leaf. Retain at least two five-leaflet leaves on each shoot.”

I don’t grow hybrid teas, which generally are finicky roses, preferring tougher roses such as some of the David Austin varieties, such as L. D. Braithewaite 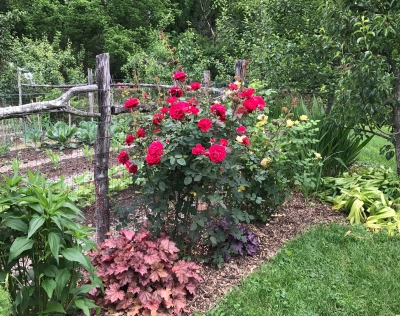 and Charlotte. Pruning is very simple. I just lop stems or groups of stems laden with spent blossoms as far back as I feel like to keep the shrubs from growing too large. They both get another pruning in late winter. 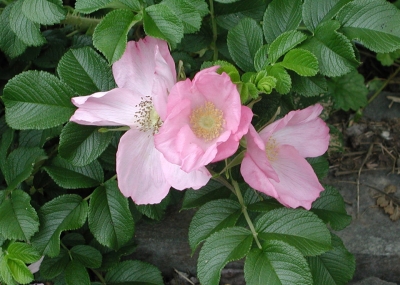 Another rose I grow, rugosa rose, won’t get any pruning this summer. Besides its nonstop, fragrant flowers, rugosa rose also bears nice hips, that is, fruits. The hips make excellent jam and are rich in vitamin C. Pruning in summer would remove spent flowers which then couldn’t go on to swell into fat hips. 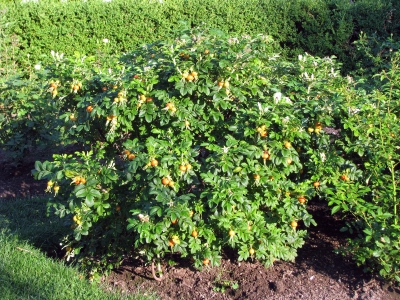