The Why, and the Easiest

Following last week’s missive about pruning fruiting shrubs, I now move on to pruning my fruiting trees. Again, this is “dormant pruning.” Yes, even though the trees’ flower buds are about to burst or have already done so, their response will still, for a while longer, be that to dormant pruning. 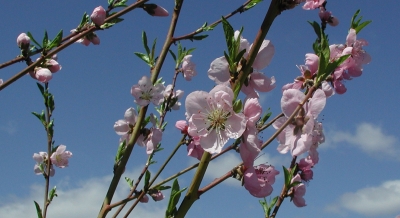 I mentioned flower buds, so these plants I’m pruning are mature, bearing plants. The objectives and, hence, pruning of a young tree are another ball game. As is renovative pruning, which is the pruning of long-neglected trees.

Most fruit trees need to be pruned (correctly) every year. Annual pruning keeps these trees healthy and keeps fruit within reach. This pruning also promotes year after year of good harvests (some fruit trees gravitate toward alternating years of feast and famine) and — most important — makes for the most luscious fruits.

With that said, as I’ve pointed out previously, a number of fruit trees can get by with little or no pruning, nothing more than thinning out congested branches, cutting back diseased branches to healthy wood, and removing root sprouts.

Among these easiest to prune fruit trees are persimmon, pawpaw, juneberry, jujube, quince, and medlar. (These are some of the uncommonly delectable fruits covered in my book Uncommon Fruits for Every Garden.) Trees such as juneberry and medlar are quite ornamental, so I also lop off or back wayward branches on these trees to keep them looking pretty.

The most straightforward approach to pruning those fruit trees that absolutely benefit from annual (correct) pruning is by grouping them according to their fruit-bearing habits.

Figs, for instance, are unique in being able to bear fruits on new, growing shoots.

So the way to prune a fig tree — with caveats — is to lop back branches, which promotes new, fruit-bearing shoots. But not too, too far or the fruit will take too long to begin ripening. I prune branches of my potted or greenhouse Brown Turkey fig trees only as far back as their permanent trunks of a couple of feet or more in length.

Also, not necessarily all the stems should be pruned back on figs, because some varieties also — or only — bear fruit on one-year-old stems. My San Piero fig, for instance. I typically leave some one-year-old stems to bear an early crop, and drastically shorten others for the crop on new, growing shoots, which begins ripening later.

Peach and nectarine trees also bear on one-year-old stems, so are also pruned rather drastically.

I shorten some branches to promote new shoot growth for next year’s harvest. I also remove some branches completely to prevent congestion, allowing branches to bask in sunlight, and breezes to dance among them. When finished, you should be able to throw a cat (figuratively) through the branches without touching them.

Fruit trees that bear their fruits on one-year-old as well as on older wood are the next grouping, and include plum, apricot, sweet, and tart cherry. The clusters of flower buds on branches of these trees are known as spurs. (Be careful not to put too much general meaning in “spur” because the word parades under a number of guises in the world of gardening.) 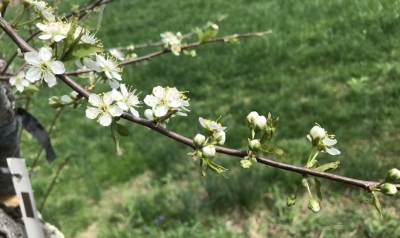 Clusters (spurs) of blossoms on plum

Pruning fruit trees removes some flower buds and potential fruits, which is all for the good because it lets the plant funnel more of its flavor-producing energy into fewer fruits so that those that remain are tastier and larger. Cherries, each of whose small fruits demand little energy, benefit the least of these fruits from such pruning so are the least pruned of the fruits in this category.

Apricot gets the most pruning in this group because its fruit spurs are borne on branches up to 3-years-old. That leaves plums, which get a moderate amount of pruning.

And Even Older Fruit-Bearing Stems

Apples and pears, the final grouping, are the most common tree fruits. Their individual branches each continue to bear flowers and fruits for many years.

Look at an older apple or pear branch and along it you see small, branching stems an inch or less long. These stem clusters are called — and I warned you — “spurs.”

Because their spurs live and bear for a decade or more, apple and pear trees require the least pruning of the fruit trees mentioned.

Then again, spurs do age, eventually becoming overcrowded and decrepit. So I thin out and shorten old spurs so that each has sufficient space and is periodically invigorated with stubby, new growth.

Exuberant, vertical shoots, known as watersprouts, often pop up on apple or pear branches. Mostly, they are unwanted because they’re not very fruitful and, left alone, will shade other parts of the tree. I cut these off right to their bases. 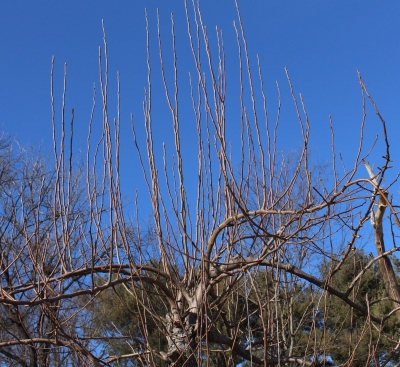 Even better is to grab hold of watersprouts when you first notice them growing and rip them off with a quick downward pull. “When noticed,” in contrast to all the pruning I just wrote about, is not during the dormant season.