You are here: Home1 / Zingiber

How Cool is That (Greenhouse)?

Having a greenhouse is a much-appreciated luxury. To avoid being profligate, I eke all that I can from its every square inch in every season.
For starters, it’s a cool greenhouse — temperature-wise “cool,” not “ain’t this a cool greenhouse” cool. Winter temperatures are permitted inside drop to 35°F. before the propane heater kicks on. And in summer, roll-up sidewalls let in plenty of cooler, outside air to save energy (and noise) in running the cooling fan. Demands on the cooling fan are also minimized by letting summer temperatures reach almost 100°F. before the fan awakens.
I have to choose my plants carefully for them to tolerate such conditions. 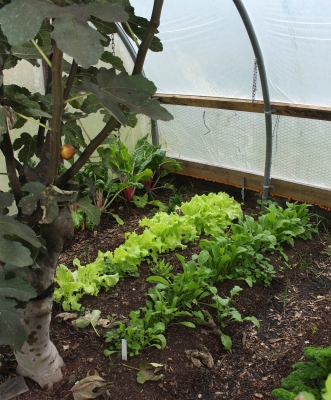 Right now, lettuce, arugula, mâche, celery, parsley, kale, and Swiss chard seedlings and small transplants trace green lines up and down ground beds in the greenhouse. I sowed seed of most of these cold-loving vegetables about a month ago. They’re too small to harvest now. No matter: The outdoor vegetable garden is still replete with greenery available for harvest through November and, probably, on into December. By then, greenhouse greenery will have grown to harvest size, then continue to do so very slowly through the dark, cold days.
And the 100° summers in the greenhouse? Above the beds spread the branches of three large fig trees, planted right into the ground (rather than pots). From those branches dangle ripe and ripening figs, as they have since July. Figs originated in the searing heat of summers in Western Asia; they can take the 100° heat of my greenhouse. Soon, cooler temperatures and lowering sun will drive the trees to stop ripening fruits, and lose their leaves and enter dormancy. (Figs are subtropical, rather than tropical, trees, so enjoy a cool — but not frigid — winter rest.) The few, leafless branches, most of them pruned back, will cast little shade to let the cool weather greenery in the ground beds below bask in what little sunlight fall and winter have to offer.
Starting in February, my greenhouse does triple duty, becoming also a home for transplants for the upcoming season’s vegetable and flower gardens. I plant the first seeds — onions, lettuce, celery, and leek — in early February, sowing them in seed flats on the narrow bench along the greenhouse’s north wall.

As each spring morphs into summer in the greenhouse, fig growth begins anew and winter’s cool weather vegetables wane and are cleared away.
How about putting the ground beds beneath the awakening fig trees to some good use? In the past, I’ve tried growing melons and cucumbers, all of which originated in hot regions of Africa and Asia, in those beds. Neither the melons nor the cucumbers did particularly well — yet.

Which brings us to this week’s ginger harvest. Greenhouse beds this summer provide a warm, moist home in which to grow ginger, a plant indigenous to the hot, muggy climate of south China. Ginger would be hardly worth growing if all I wanted was the khaki-skinned rhizomes that I could pick off a supermarket shelf. Those tough-hided roots are mature ginger, which has a fibrous flesh. 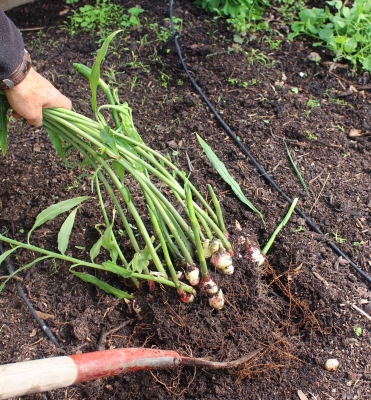 What I was shooting for was baby ginger, whose pink-tinged, white skin, encloses flesh that is tender, lily-white, and free of fibre.  The flavor is a little different than mature ginger, cleaner. This tropical plant I figured could — and it did — thrive in my hot greenhouse all summer.
To get started, way back in March, I purchased a single root of mature ginger at the supermarket, broke it into four sections, and potted each section into a 4 inch pot. As I said, the plant needs heat, so I set the pots on my seed-starting mat to maintain a temperature of about 70°F. Still, it took awhile for green sprouts to show.
The potted ginger plants were ready to plant out in a greenhouse bed just as the last of winter’s vegetables were being cleared away there. After planting, I refurbished the soil with a mulch of compost. Cool soil got the plants off to a slow start but once summer heat kicked in outdoors, and then really kicked in within the greenhouse, the ginger thrived. 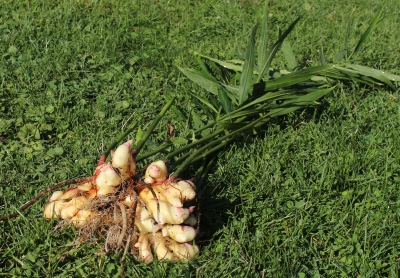 The goal was to let ginger linger to eke maximum yield but not so long that the rhizome would begin to mature. I also needed space for this winter’s plantings. As it turns out, the first objective, maximum yield, was moot. Yields were prodigious, four plants yielding much more than we could possibly eat.

The first order of business with the harvested baby ginger was to pickle it. All that was needed was to slice it thinly with a carrot peeler then pour boiling vinegar sweetened with a bit of maple syrup over it.

Spring Coming? Might As Well Go For Something(s) Tropical

Do I smell spring in the air? Must be. And the calendar confirms that it’s just around the corner. These hints finally stir longings for that season — even for a skiier. And what better way to welcome spring in than with attention to some tropical plants.
My banana plants have weathered winter very well this year, indoors, of course. Last year I was proud that my one plant survived. After all, banana is a truly tropical plant. It shivers at temperatures below 50° F. and enjoys 80° days and nights as its broad, satiny leaves drink in year ‘round bright sunlight, occasional rains, and humid air. Even if my house was warm, which it is not, only a relative paltry amount of sunlight streams through even a south-facing window, and the air is bone-dry. Hence my pride. 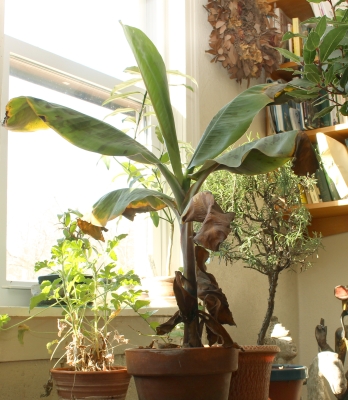 My philosophy last year was to send my banana tree into a state of suspended animation by withholding water and keeping the plant on the cool side. It did survive winter, barely. Once the weather warmed outdoors, it took a few weeks before the plant fully awakened. Actually the mother plant never did awaken, but two of its pups did. Pups are small plants that arise at the base of the mother plant, and are one of the ways in which new banana plants are propagated. (You no doubt noticed that cultivated bananas do not have seeds).
Once the pups were growing strongly, I tipped the plant out of the pot and cut off each pup to pot up separately.
This fall my approach was to keep the banana plants happy. Even if they couldn’t have steamy conditions of the tropics, I would at least provide their roots with plenty of water. And happy they are: New leaves have unfurled all winter, with few of the older ones drying out. By the end of May, the weather outdoors will be ready to receive the plants, which should grow exuberantly, as bananas are wont to do with good conditions.
Bananas bear quickly so at this rate I may sometime be harvesting fresh fruit. If not, I can always use the leaves to make Indonesian pepes.

Notice, above, that I never referred to a banana “tree.” Banana plants might look tree-like and grow to the proportions of trees, but they are not actually trees. They are giant, perennial herbs. The “trunk” is composed of a sheath of tightly-wrapped leaf stalks. Each vertical stalk successively unfurls into a broad leaf which then splays its blade out horizontally. 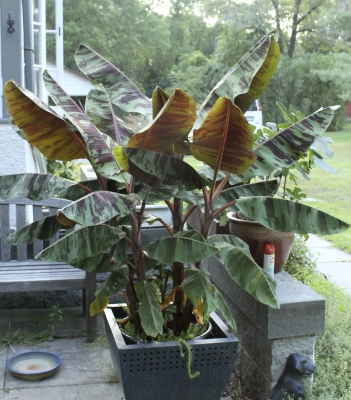 All new growth is pushed up from the corm at the base of the leaf stalks.
Musa basjoo is a banana that’s cold-hardy to about zero degrees F. The top will die to the ground in winter but the corm, if mulched for further protection in the ground, survives winter. Nothing worth eating from this banana plant, although it makes a bold, tropical statement in summer.

I could never understand the current commercial interest in growing ginger, a tropical plant, in cold winter regions, such as here. Until last year, that is, when I tasted freshly harvested, immature ginger I got from a gardening friend. The roots had a smooth flavor and fiber-free flesh as compared with the mature roots usually sold.
So this year, of course, I’ll be growing ginger, and the time to begin is now. To that end, I “harvested” some mature rhizomes from the grocer’s shelves, broke them into pieces each with 3 to 4 eyes, and planted them. Not outdoors, but indoors. And not just any place indoors, but somewhere especially warm. 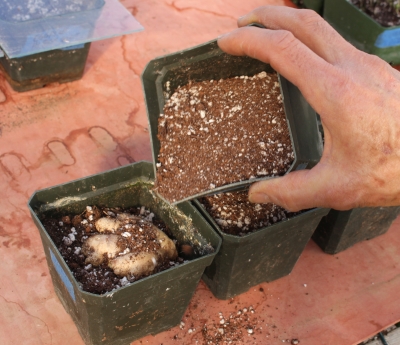 The goal is to get just the beginnings of shoots and roots growing. Each rhizome piece went into a bed of potting soil in a 4 inch pot, covered with another half to 3/4 inch of soil, and watered. Best growth is at about 80°F., no problem when the sun beams down on the greenhouse. On cloudy days and at night, though, temperatures can drop into the 30s. So I placed the pots on a large heating mat in the greenhouse that I use to warms seedling flats to get seeds started. (Seeds need warmer temperatures to germinate than seedlings need to grow.)
Ideally, roots and shoots will have filled those pots by the time the greenhouse has been cleared of lettuce, arugula, and other cool weather greens and the soil temperature is above 55°F. That’s when the ginger can be planted in the ground; I figure on the end of May. Ginger is a heavy feeder, so each plant will go into a mound of pure compost that I’ll add to as the plants grow.
Come September, I’ll pull the roots. They won’t yet be mature. That’s a good thing.

Banana and ginger both grow from underground structures, a corm and a rhizome, respectively, each providing energy storage and buds for new plants. Corms and rhizomes are modified, underground stems. 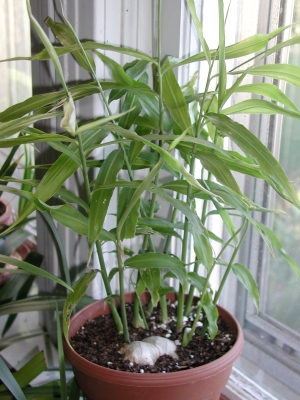 A corm is an upright, fleshy, thickened stem having a protective tunic of modified leaves. Baby cormels arise near the base of the corm. The cormels sprout leaves and become pups like the two that grew at the base of my mother plant.
A rhizome is a horizontal-growing, underground stem. New plants can be made by breaking off pieces of rhizome and planting them, as I did with the ginger and as is done with potatoes.
Sometimes banana corms, like ginger rhizomes, are eaten. I won’t be eating my corms.

Wendy, who commented on March 19 about her travails in fruit growing, is the winner, by random drawing, of my book GROW FRUIT NATURALLY. Congratulations Wendy.

Check out my video page for my timely, new video about seed starting.