My Rationale for Pruning so Late

Today I put the finishing touches on pruning my grapevines. Yes, it’s late: The buds have already swollen and expanded into clusters of small leaves. But there’s “method in my madness,” or, at least, my tardiness. 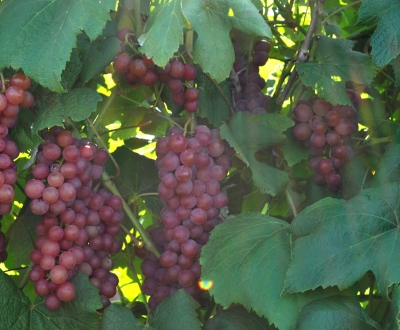 My vines often experience some winter damage, some varieties — New York Muscat, Reliance, and Vanessa, for instance — more than others. Waiting to prune until I see some green saves me from cutting off too many living canes and saving too many dead canes. In winter it’s not so easy to tell them apart.

So I do mostly rough pruning in winter, lopping back canes that have to go whether they’re living or dead. Canes also need to be shortened, even those that are to be eventually saved.

Which brings me to another reason I left the final pruning until today. Plants generally make their earliest growth in the season starting at the tips of shoots or canes. So when I shortened the remaining canes in winter, I didn’t cut them all the way back to their final length. Then if a late frost nips or kills early growth, it’s no problem. The canes are going to be shortened even further — today — to where buds were not as fully awake and susceptible to cold.

But waiting too, too long to prune can be problematic because those swollen buds flick off their resident canes with very little coaxing. Leave too much to prune this time of year and a lot of buds fly off as pruned canes are pulled down off the plant. 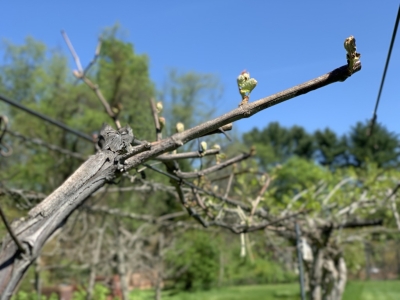 A grapevine bears fruit near the bases of shoots that grow off one-year-old canes. Left to its own devices, the vine might grow 50 feet up into a tree, bear so heavily that it can’t provide sufficient energy to pump optimum flavor into each berry, and become a dark, dank, tangled mess of stems — perfect conditions for fungal diseases. 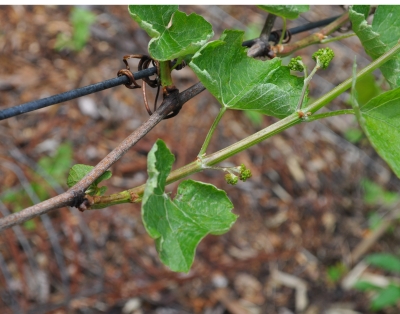 The goal of various methods of training and pruning grapes are the same: to leave a suitable number of canes conveniently positioned for harvest; to provide buds to grow into new, well-placed shoots for fruiting the following season; and to create a form that allows for good light and air circulation. As might be expected of a plant that’s been cultivated for thousands of years, many ways have been devised for training grapes.

The Four-arm Kniffin System is a kind of “cane pruning,” a traditional method of training in eastern U.S.. For support, a two-wire trellis, with one wire 6 feet and the other wire 3 feet above ground, is needed. The mature plant consists of a trunk with four canes growing from it, two trained in opposite directions along the upper wire and two similarly trained along the lower wire.

Pruning begins as four canes to carry the season’s fruits are selected. These canes should be moderately vigorous and originate close to the trunk and near the wires. With this year’s fruiting canes selected, plans for the following season’s crop are made by cutting back some stems to two buds each; these renewal spurs, as they are called, provide points of origin for new shoots (which will become fruiting canes in a year) near the two wires and on either side of the trunk.

Next, lop away all growth except for the four renewal spurs and the four saved canes. Finally, shorten each of the canes to about 6 ft. in length, leaving about 10 buds per cane (not counting bud clusters near the bases of the canes). This leaves ten times four, or 40, fruiting buds on the plant.

Many Methods with the Same Goal

At the other extreme in pruning is “spur pruning,” where all that’s left is many 2-bud canes (now called “spurs”) from which grow fruiting shoots. “Head training” would be the most basic spur pruning, with the pruned vine left with nothing more than a trunk capped by a number of spurs. 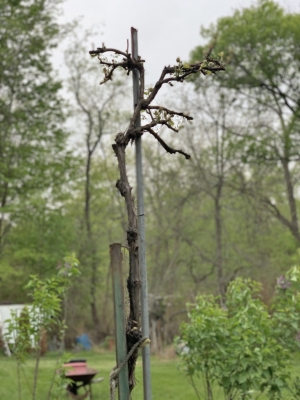 A spur-pruned vine might instead sport a permanent trunk topped by two arms — permanent arms, called “cordons,” in this case — that run in opposite directions along a trellis wire.

Instead of leaving 4 long canes on which to bear fruit, many short, 2-bud canes are left along the cordons. To get the same number, 40, of fruiting shoots on a spur-pruned vine as on a Kniffen-pruned vine, twenty 2-bud spurs are left. All excess are cut away so that those that remain are 6 to 12 inches from their neighbors.

Over time, some spurs will stretch, even after being shorted to 2 buds of one-year-old shoots, further away from the cordon. Lopping these back nearer the cordon puts them back in order.

Where to put all those fruiting shoots growing from the spurs? With “midwire” cordon training, cordons are trained along a wire at 3 foot height, and new shoots are trained upward by weaving them into 3 rows of wires strung at one foot above the cordon wire. 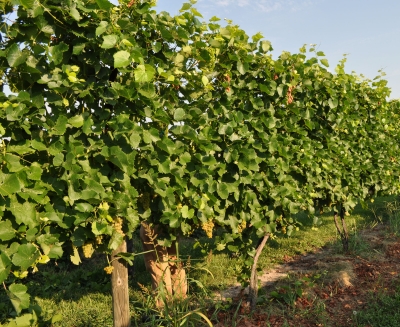 With “high-cordon” training, a trunk rising to about 6 feet is capped by two cordons trained in opposite directions along a wire. Fruiting shoots droop downward. 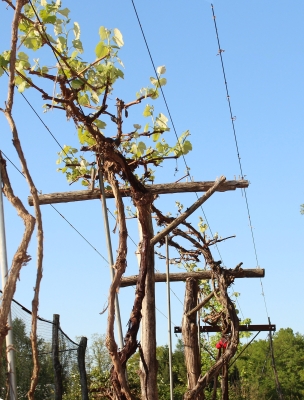 My grapes grow as high cordons, with a wrinkle; their fruiting shoots spread horizontally, rather than droop down. Wooden cross pieces provide this support on my arbor. Although this rigorous pruning puts off how soon the arbor offers relief from early summer sun, the arbor never becomes a tangled mess of stems and disease-ridden berries characteristic of many helter-skelter pruned grape arbors.

The trellis for my other high-cordons have two sets of wires running parallel on either side and one and three feet from the cordon’s wire. These wires provide a ledge on which fruiting shoots can rest, with clusters of grapes dangling just high enough for me to reach for easy harvest.