You are here: Home1 / Scott Nearing

Plastic on My Bed?!

You’d be surprised if you looked out on my vegetable garden today. Black plastic covers three beds. Black plastic which, for years, I’ve railed against for depriving a soil of oxygen, for its ugliness, for — in contrast to organic mulches — its doing nothing to increase soil humus, and for its clogging landfills. 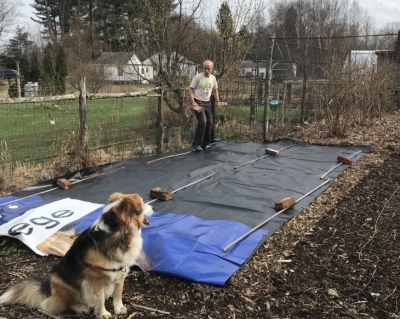 Actually, that insidious blackness covering my beds is black vinyl. But that’s beside the point. Its purpose, like the black plastic against which I’ve railed, is to kill weeds. Not that my garden has many weeds. But this time of year, in some beds, a few more sprout than I’d like to see.

The extra warmth beneath that black vinyl will help those weeds get growing. Except that there’s no light coming through the vinyl, so most weeds will expend their energy reserves and die. And this should not take long, depending on the weather only a couple of weeks or so.

So, first of all, I’m covering the ground for a very limited amount of time.

Furthermore, that the black vinyl is not manufactured specifically for agriculture. It’s recycled billboard signs, available on line from www.billboardtarps.com and other sources.  For larger scale use, farmers use the material sold for covering silage.

Old billboard signs or silage covers also improve on black plastic mulch because they are tough. Each time they’ve done their job they can be folded up for storage for future use to be used over and over.

Decades ago, I made a dramatic career shift, veering away from chemistry and diving into agriculture. In addition to commencing graduate studies in soil science and horticulture, I rounded out my education by actually gardening, reading a lot about gardening, and visiting knowledgable gardeners and farmers, including well-known gardener (and better known political and social scientist) of the day, Scott Nearing. 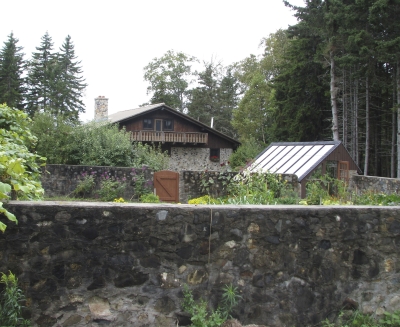 I had just dug my first garden which had a clay soil that turned rock hard as it dried, so I was especially awed, inspired, and admittedly jealous of the soft, crumbly ground in Scott’s garden. What a surprise when someone who had worked with Scott for a long period told me how tough and lean his soil had been when he started the garden. A number of giant compost piles were testimonial to what it takes to improve a soil.

I thought of Scott and his soil as I was planting peas a few days ago. My chocolate-colored soil was so pleasantly soft and moist that I could have made a furrow with just by running my hand along the ground. For a long time I’ve appreciated the fact that the soil in my vegetable garden is as welcoming to seeds and transplants as was Scott’s.

And my dozen or so compost piles, inspired by Scott’s, are testimonial to those efforts. 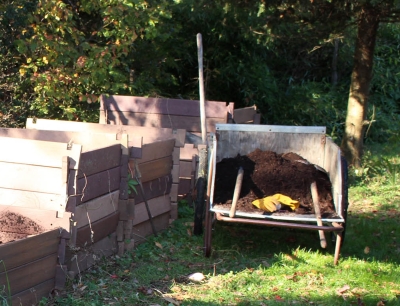 The soil in my permanent vegetable beds is never turned over with a rototiller or garden fork; instead, every year a layer of compost an inch or so deep is lathered atop each bed, and no one ever sets foot in a bed. That inch of compost snuffs out small weeds, protects the soil surface from washing away, and provides food myriad beneficial microbes (and, in turn, for the vegetable plants).

All sorts of what I consider gimmicky practices attract gardeners and farmers each year: aerated compost teas, biochar, nutrient density farming, fertilization with rock dust, etc. Yet one of the surest ways to improve any soil is with copious amount of organic materials such as, besides compost, animal manures, wood chips, leaves, and other living or were once-living substances. A pitchfork is a very important tool in my garden.

Not all is copacetic here on the farmden.

I make my own potting soil for growing seedlings and larger potted plants. It’s a traditional mix in that it used some real soil. Just about all commercial mixes lack real soil because it’s hard to maintain a sufficient supply that is consistent in its characteristics.

Early this spring, as usual, I sifted together my mix of equal parts compost, peat moss, perlite, and garden soil. This year, NOT as usual, germination of seeds and seedling growth has been very poor. Just today, I re-sowed all my tomato seeds in a freshly made mix from which I excluded soil.

I’m not 100 percent sure that the soil in the mix is the culprit, but it is suspect. I have a small pile of miscellaneous soil that I keep for potting mixes and other uses.

Recent additions to that pile were an old soil pile from a local horse farm and soil from a hole I was digging to create a small duck pond. The latter was poorly aerated subsoil.

Seedlings are growing well in my new mix composed only of compost, peat moss, and perlite.