You are here: Home1 / rhododendron

So I visited my brother and his family for Thanksgiving. As usual, we walked around his yard to look at his plantings. As usual, he asked my advice, this time about pruning. (As usual, he didn’t want to consult a copy of my book, The Pruning Book, which I had given him a few years ago. “Why read it, when I can just ask you?!” he says.) 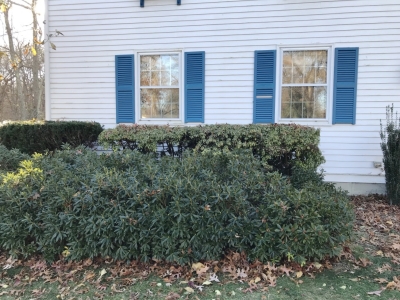 He was considering taking blades to a row of handsome, evergreen shrubs along the front of his house. Over the years, the lengthening branches had sprawled out to encroach upon the bordering lawn, in some places leaving exposed bare stems. He questioned whether new growth would sprout if he lopped all those sprawling stems back to near the roots. 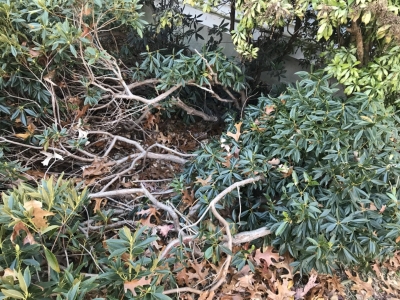 But what was the plant? I had an excuse, admittedly rather lame, for not knowing it: I learned all my ornamentals in Wisconsin where not many broadleaf evergreens are hardy. No matter. Sometimes you can figure out how to prune an unknown plant by just studying its growth habit.

Many evergreens, including most pines, Douglas firs, rosemary, and some rhododendrons, will not sprout new growth if cut back to bare old wood. (At the other extreme are boxwoods and yews, which sprout all over the place no matter how they are cut back.)

I suggested going ahead with drastic pruning of the unknown shrub. My confidence came from seeing many young sprouts emerging from the old stems right near where they emerged from the ground and then bent over from their own weight. Hormones within plants promote sprouting of vigorous, new shoots near the high point of a stem wherever it bends over. Pruning a stem back likewise promotes sprouting right near the cut.

Looking across the front path, bro’ next asked me how I liked the pruning job he’d done on his rhododendrons. Hmmm, pretty good. 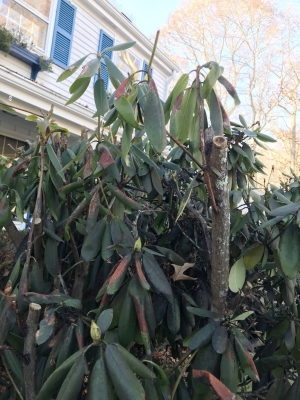 As often happens with rhododendrons, they are planted near a home and then too often grow so large as to swallow up windows, even the whole side of the home. His had done so, and he had pruned stems back to the height he wanted.

Two problems with this pruning. First, as noted above, when a stem is pruned back, most regrowth, and the most vigorous regrowth, occurs just below the cut. So although he cut the plant down to size, he should expect it to start growing back up to its previous size quickly.

The other problem with this pruning is that it leaves the plant looking butchered, large wounds gaping out atop thick stems whose upward mobility has been abruptly stopped. The best pruning jobs are ones where a plant looks nice without looking as if it has even been pruned.

My approach would have been to make a few cuts of the largest stems down in the interior of the shrub, where the stems originated. The largest stems would also be the tallest ones, so such cuts would be effective in lowering the plant. If too many need removal at once, the operation could be spread over 2 or 3 years. Then the pruning cuts would hardly be noticed, and letting light down low among the stems would promote healthy new growth starting low.

With all that said, my brother’s rhodies didn’t look too bad — and he has the opportunity over the next year or two to make my suggested cuts. Lucky for him, his rhodie was not one of the few that are reluctant to make new sprouts in lopped back older wood.

Once I get started pruning, it’s sometimes hard to stop. As I looked at his yew shrubs along another part of his house, I suggested paring down the size of that rectangular block of greenery. 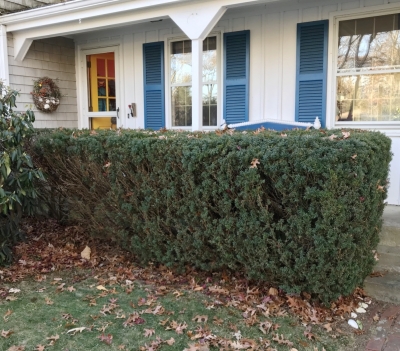 Pruning yew is easy. Since it resprouts up and down stems no matter how severely it’s cut, you can do almost anything to it. His large hedge could even be cut down to stumps to begin life anew — quickly, because it has an established root system.

Most important when reducing the size of the hedge, no matter how it’s cut, is to reduce the whole hedge to a size smaller than finally desired. When maintenance trimming a shrub with hedge shears, trimming is generally further out from where the newest shoots began their growth for the season. That’s why hedges grow larger over time, unless they’re periodically lopped back more drastically, which doesn’t leave them looking that good until those cuts are covered by new growth.

I don’t feel so at a loss at not being able to identify my brother’s mystery shrub: I sent a photo of it to a few experts, none of whom could identify it.