You are here: Home1 / mycorrhiza

This far north, there’s only a little to do garden-wise this time of year, so let’s sit back and ponder the wonders of plant life. Mycorrhiza, to be specific. Wait! Don’t stop reading! Sure, the word “mycorrhiza” appears intimidating. But mycorrhiza are important in your garden, in the forest, to your trees and shrubs, maybe even to your houseplants.

First, the pronunciation. Say: my-ko-RY-za. It sounds nicer than it looks.

Now let’s take the word apart to see what it means. “Myco” comes from the Greek word meaning “fungus” and “rhiza” from the word meaning “root.” Mycorrhiza, then, is a “fungus-root,” an association between a plant root and a fungus so intimate that the pair has been given a name as if it was a single organism. 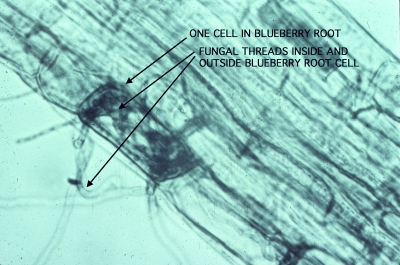 The association is symbiotic, beneficial to both parties. One end of the fungus infects a plant root, while the rest of the long, threadlike body of the fungus ramifies through the soil. Nutrients are absorbed from the soil by those fine fungal threads and pumped back to the plant. The result: mycorrhizal plants can draw nutrients and water from a greater volume of soil than can non-mycorrhizal plants, and plant nutrition is improved. To cite one practical demonstration of this benefit, agricultural scientists in California found that the presence of mycorrhiza was equivalent to the addition of more than one hundred pounds of phosphorus fertilizer per acre on citrus trees. 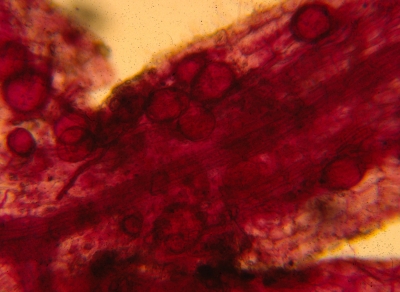 Another kind of mycorrhiza, in apple root

The mycorrhizal association might be termed a balanced parasitism; the fungus does exact payment for its services. Carbohydrates are, literally, the fuel of life, and though mycorrhizal fungi are adept at drawing minerals from the soil, they can’t make their own carbohydrates. So these fungi draw carbohydrates from their host plants, who can make it. Sunlight fuels the photosynthetic reaction of carbon dioxide and water into carbohydrates and oxygen.

Not all fungi are mycorrhizal. Non-mycorrhizal fungi get their carbohydrates either by eating living things without returning the favor, in which case they are called parasites. Others eat once-living organisms such as wood, leaves, and dead animals, in which case the fungi are called saprophytes. Some fungi feed on either or both the living and the dead.

Mycorrhiza are almost ubiquitous on the earth. Walk through the woods in spring or fall and most of the mushrooms you see on the forest floor are the reproductive structures of mycorrhizal fungi, periodically popping up through the ground to spread spores. Below ground, these mushrooms are connected to nearby tree roots by fine fungal threads.

The plant known as Indian Pipes (Monotropa uniflora) offers an eerie signal of the presence of mycorrhizae below ground. This plant, with one nodding flower, is thoroughly white, lacking any chlorophyll with which it could use sunlight to fuel its growth. Instead, its roots tap into a specific mycorrhizal fungus whose underground threads are also tapped into the roots of a nearby tree. Indian pipes is a parasite; it takes from the fungus and the tree, offering nothing in return. 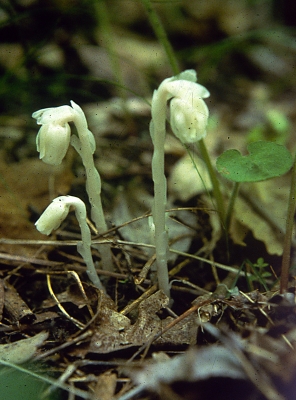 Mushrooms are formed only by certain types of mycorrhizal fungi. Most mycorrhizal fungi are not so obvious, working unobtrusively in association with the roots of the vegetables and flowers in your garden, your lawn, shrubs, and trees. The gourmet’s truffle is the underground reproductive structure of one type of mycorrhizal fungus.

Most plants on our planet are infected with mycorrhizal fungi. Mycorrhiza are absent only in special situations such as in the acidic, nutrient-poor spoils left from mining operations, in agricultural soils that have been sterilized to kill pests, and in sterilized potting soil in flower pots. Certain plants never become infected; cabbage, spinach, buckwheat, and their relatives, for example.

The importance of mycorrhiza is not diminished by their ubiquity. Mycorrhiza is a general term, and not all mycorrhiza are equal. A plant may be mycorrhizal, but perhaps not with the most effective species of mycorrhizal fungus or, perhaps, not enough of them. Mulching, fertilization, irrigation, chemical use and other gardening and agricultural practices alter the types and amounts of mycorrhizal fungi in the soil. Rototilling or turning over the ground, as you might imagine, disrupts those fungal threads. Except for high fertility, what’s good for plants — plenty of soil organic matter, growing plants, good aeration, adequate moisture — is also generally good for mycorrhizae.

Old-time gardeners would throw a handful of soil from an old apple tree into the planting hole for a new apple tree. A crude form of mycorrhizal inoculation? Agricultural researchers have tried to quantify why plants respond to inoculation with mycorrhizal fungi at one site, and not another. Which are the best fungi? What affects them? Recent research has shown that improved nutrition is only the most obvious effect of mycorrhiza. The mycorrhizal association also influences plant response to stresses such as drought, insects, and diseases.

As you might imagine, mycorrhizal fungi have been commercialized, available as inoculants or premixed into packaged potting soils. Under certain conditions, this might be beneficial. In many situations, it’s like “taking coals to Newcastle.” Usually, create conditions conducive to mycorrhizal formation, and a beneficial symbiosis will develop.

For my research as a graduate student, I studied the effect of, among other things, mycorrhizae in blueberry soils. Even my plants grown in sterilized soils in a greenhouse became mycorrhizal, which, while messing up that aspect of my experiment, did highlight how ubiquitous the association can be without the human hand.

If you want to lend your hand to the mycorrhizal association, you could actually extract and grow your own mycorrhizal inoculum. Read how, and learn all about mycorrhizae in Jeff Lowenfels’ excellent book Teaming with Fungi: The Organic Grower’s Guide to Mycorrhizae.

At any rate, mycorrhiza is a fascinating demonstration of ecology, the interrelationship of organisms on the earth.

There’s a fungus among us. Actually, fungi, all over the place. Right now, though, I’m focussed on a special group of fungi, a group that, as I look out the window on my garden, the meadow, and the forest, has infected almost every plant I see. Like so many microorganisms — most, in fact — these fungi are beneficial.

The fungi are called mycorrhizal fungi; they have a symbiotic relationship with plants. (“Mycorrhizae” comes from the Greek “myco,” meaning fungus, and “rhiza,” meaning root.) The plant and the fungus have an agreement: The plant offers the fungus carbohydrates which it makes from sunlight, carbon dioxide, and water; in exchange, the fungus infects plant roots and then spreads the other ends of its thread-like hyphae throughout the soil to act to be virtual extensions of the roots. The plant ends up garnering more mineral nutrients from the soil. The fungus also helps offer protection against pests and drought. It’s an arrangement that has worked for eons.

Except for where soil has been doused with heavy doses of pesticides or discombobulated by land excavation, mycorrhizae are everywhere. Only a few plant families get along without this symbiosis. Some more familiar, nonmycorrhizal plants include cabbage and its kin, carnations, lamb’s-quarters, and sedums. Other plants can grow without mycorrhizae, but then miss out on some of the benefits and don’t make most efficient use of minerals soil has to offer.

Why mention mycorrhiza at this moment of time? Two books on mycorrhiza were published this year; either one, but not both, are worth reading. Both cover the kinds of mycorrhizae, their effects, their nurturing, and probably everything else you might want to know about this symbiosis. 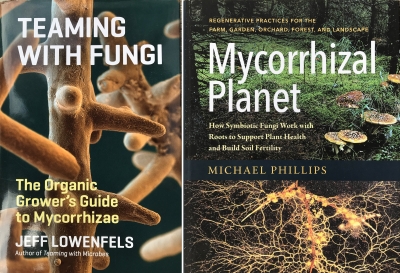 Michael Phillips’ Mycorrhizal Planet will appeal more to the hip gardener, the one who burns wood for biochar for their soil, builds hugelkultur mounds (look it up), and spritzes plants with herbal extracts to boost their immune function. He’s mostly right when writing about mycorrhizae but often enters the land of woo-woo when venturing off-track. For instance, he writes, and then runs with, “many species of insects lack the digestive enzymes needed to break down complete proteins.” Not true.

The other book about mycorrhizae, Jeff Lowenfels’ Teaming with Fungi, presents a similar overview to mycorrhizal fungi, and their application, to that presented in Mycorrhizal Planet, with one notable difference. Teaming with Fungi details straightforward methods how you or I can actually grow our own mycorrhizae with which to inoculate plants to get them off to the best possible start.

The two books differ dramatically in their writing style. I eventually tired of Phillips’ overly flowery style and anthropomorphizing. “The synergy that unfolds as a result of outrageous diversity in the orchard delights me to no end . . . .The root systems of fast-growing tree with relatively pliable wood make barter possible between AM [arbuscular mycorrhize] and EM [ectomycorrhizae] fungi.” Lowenfels’ Teaming with Fungi is more firmly grounded in real science and application than Mycorrhizal Planet. I found Lowenfels’ writing more straightforward and engaging: “Some trees form AM, but others have evolved over time and are hosts to EM. Some trees are hosts to both forms of mycorrhizae, though usually at different periods in their lives.” (Different strokes for different folks.)

The mycorrhizal symbiosis was first studied and described in the latter half of the 19th century. Less long ago, but still long ago, I studied them as part of my doctoral work, specifically the ericoid mycorrhizae that are specific to blueberry plants and their kin. With the increased appreciation of the diversity, extent, and effect of the living world within the soil in recent years, mycorrhizae have moved into the spotlight. Read about them, nurture them, and make use of them.

And Weeds Among Us

Rising now to see what’s going on aboveground, I see that the garden has moved mostly into its maintenance phase for the season. That entails mowing, scything, making compost, keeping an eye out for pests and taking action, if necessary.

And, of course, weeding. My weeding weapons of choice are my hands, for larger interlopers, and either the winged weeder hoe or wire hoe for small ones. Called into action weekly, either of the two hoes easily slice through the top quarter inch of soil surface to do in small weeds that haven’t even yet poked their heads above ground. 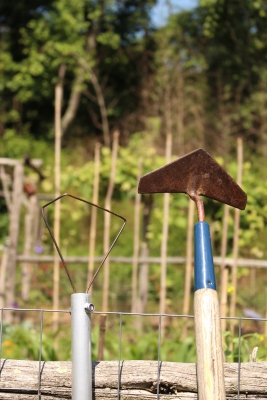 All the better to forestall the appearance of large weeds, which are much harder to kill and also threaten to spread seeds or grow strong roots. Regular hoeing also keeps the soil surface loose to better absorb rainfall.

Early July seems to be when true gardeners part ways with other gardeners. Regular weeding  and other garden maintenance keeps the garden in good shape for the fall garden which, with good maintenance and planning, is like having a whole other garden, providing vegetables and flowers well into fall.