You are here: Home1 / light

Plant growth has come screeching (almost) to a halt. Lettuces just sit, hardly growing. No wonder, you are no doubt thinking. It’s getting colder and colder outside. I know that, but I’m writing about lettuces in my greenhouse. The issue isn’t lack of heat. It’s lack of light. 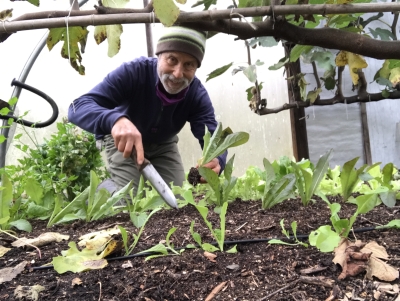 For more evidence that light is the issue, look to good vegetable gardens in southern Europe. In that mild climate, harvest from a well-planned vegetable garden continues year ‘round. But year ‘round harvest there takes planning — lack of light also makes for very slow growth over there in these darkest months. Unprotected plants survive because the winter weather never gets that cold over there. (And cool-season vegetables, such as spinach, radish, and turnips, that we plan for sprig or fall, are what do well in Mediterranean winters.)

My garden here in the Hudson Valley, at about the 42nd parallel, experiences winter day lengths the same as Rome, Italy or the island of Corsica — all on about the same 42nd degree of latitude. If lettuce plants grow slowly in Rome and Corsica, then the slow growth of lettuce in my greenhouse should come as no surprise. But it always does surprise me, and the brakes seem to start getting applied back in October, with full pressure about now.

All this came to the forefront of my attention back in 1992, when I read Eliot Coleman’s excellent book Four-Season Harvest. After highlighting the similar insolation of much of our “northern regions” with much of balmy Europe, he went on to describe various ways of protecting winter vegetable from our winter cold, which would kill most of them. Keeping the plants a bit warmer also gets them growing sooner once days become longer and brighter.

My goal, in the greenhouse, is to get a good share of the plants almost fully grown going into December. With lettuces, I try to plan to have enough of them to fill salad bowls through January and February, after which smaller plants are starting to grow fast enough to fill those bowls.

The reason Corsica and Rome remain relatively balmy all winter while winters here, with both locations at the 42nd parallel, get so frigid is that Corsica is bathed by the Gulf Stream, that warm mass of air that flows up from the Caribbean and across the Atlantic to wash over western Europe.

The warm touch of the Gulf Stream is lost as you move further east across Europe and into western Asia. Kazakhstan, parts of which also lie at the 42nd parallel, experience average annual temperatures from -60°F to 104°F!! The climate of nearby Turkey, whose north end touches that latitude, is moderated by the Caspian Sea. Moving further east to parts of Inner Mongolia, still within the 42nd parallel, winter temperatures might dip to -90°F.

A Greenhouse is not a Hothouse

If you were to join me in my greenhouse today, don’t forget your hat and gloves. The greenhouse is heated, but only minimally, enough to keep the temperature from falling below 37°F. That temperature provides a nice balance between energy use and reasonable year ‘round harvest. (Expotentially more energy is needed for incrementally increasing temperatures.)

Today is rainy and very cool, but not cool enough to kick on the greenhouse heater. So it’s pretty much the same temperature inside the greenhouse as outside the greenhouse — in the 40s. Most of what’s growing — kale, celery, mâche, claytonia, Swiss chard, mustard greens, parsley, and arugula — do fine with these conditions.

Leafy vegetables require less energy (i.e. sunlight) than do fruiting vegetables, so the low light is also fine to keep them happy even if only slowly growing, just as they would be planted (outdoors) in a garden in Corsica or Rome.

That’s also home to my baby, hardy cyclamens (about which I recently wrote), in a seed flat, until they decide to lose their leaves and go dormant. And two cardoon plants, also native to Mediterranean regions.

One Mediterranean plant that is very unhappy this year, even in the greenhouse, is fig. Figs are still ripening but, with the high humidity and low light, each is soon covered with fuzzy, gray mold. 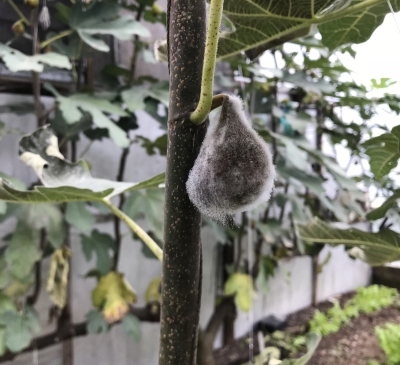 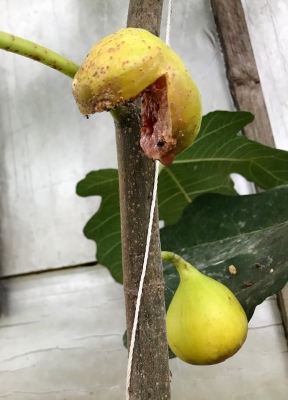 Roots of Rabbi Samuel fig, near the endwall, spread under the wall and outside the greenhouse, soaking up so much water that the figs split before ripening. Yet, a few fig fruits escape both afflictions and ripen to juicy sweetness.

I wonder if fig gardeners in the Mediterranean share my fig problems.