You are here: Home1 / Flying Dragon

Oranges? In New York, planted outdoors in the ground? Yes, I have them ripening on the branches now. No matter if they ripen thoroughly or not because, although they are true oranges, delicious flavor  is not one of their assets. It’s still a plant well worth growing.

The plant is the aptly named “hardy orange,” actually a true citrus species, Citrus trifoliata. (Previously, hardy orange was a citrus relative; botanists recently moved it to the Citrus genus from the closely related Poncirus genus.) 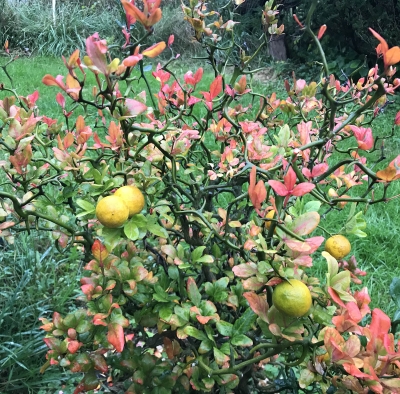 Mostly I planted hardy orange for its stems, whose show is at the same time intimidating, interesting, and decorative. Stems of the variety that I grow, Flying Dragon, twist and contort every which way, and then add to the show with large, recurving thorns. Stems and thorns are forest green, even as they age, and remain so all through winter to make the plant especially decorative when leafless. 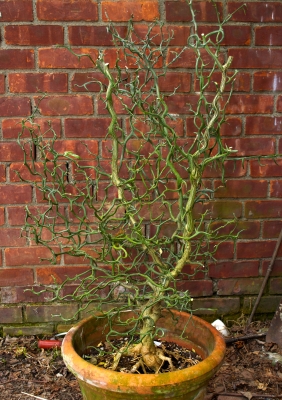 I would have planted Flying Dragon hardy orange just for its stems. But adding to the show, in spring are white flowers — citrus flowers — that are fragrant just like those of oranges and lemons. On my plant, at least, they’re smaller with commensurately less fragrance.

This year, this month, Flying Dragon has presented yet another attractive face. Its leaves are preparing to drop by turning a pinkish crimson. This color, developing for now on leaves towards the ends of the topmost branches contrasts nicely with the still forest green leaves and the few fruits starting to yellow. 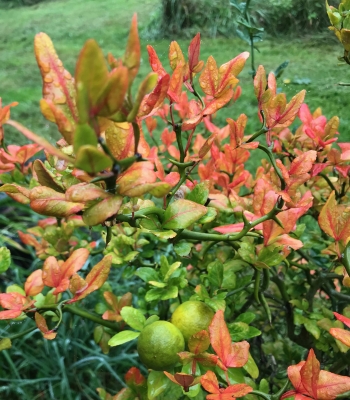 The problem with the fruits, gustatorily, is that they’re not very juicy, and they are very tart, somewhat bitter, and seedy. Still, they can be used to add a bit of home-grown citrus flavor to an -ade (Flying Dragonade?), fish, etc.

I Plant A Seed

New hardy orange plants are easy to raise from seed. The most important ingredient, as with other citrus, is not letting the seeds dry out once extracted from the fruit.

With most plants, you don’t get an exact replica of the mother plant in seedlings. Plant a McIntosh apple seed and the resulting tree will not bear McIntosh apples. (Just as you are not a genetic replica of your mother.) It depends on what pollinated the mother tree and how the chromosomes sorted out. Even though peaches are self-pollinating, the offspring of a Redhaven peach won’t bear Redhaven peaches.

Plant a seed of Flying Dragon hardy orange (or some other citrus varieties, in general), and you could get more Flying Dragons, exact replicas of the mother plant. That’s because citrus are among the few plants that exhibit apomixis, that is, seeds within the fruits that develop from only mother plant tissue.

Not all the seeds within a Flying Dragon fruit are apomictic. Hence, not all will grow to become Flying Dragons. 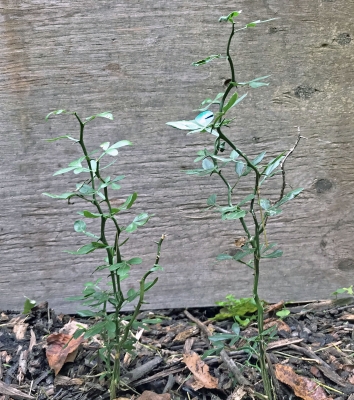 The seedling on right is probably apomictic

Further complicating matters, some seeds can develop into more than one seedling! And some of those seedlings growing from that one seed might be apomictic while others will be run-of-the-mill.

None of these complications interferes with my propagating Flying Dragons from seed. The contorted stems and recurved thorns are so distinctive that it’s easy to tell the Flying Dragons from the others. Apomictic seedlings also are generally more vigorous than sexually-produced seedlings.

Not Everyone’s A Fan

Southerners are not nearly as enamored with hardy orange as I am . The hardiness, the thorns, and the seeds’ enthusiasm to sprout make the plants a threat down there, where the shrubs grow from 8 to 15 feet tall.

Hardy oranges were introduced into the south about 150 years ago, possibly to contain livestock. There, the plants have spread to woodlands, forest edges, and fencerows to shade out native plants. The lack of affection for the plant might be summed up in a quote from a Texas publication stating that hardy orange “does respond well to bulldozing.” 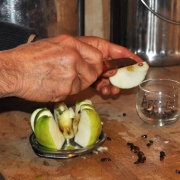 Around here, eating fruit isn’t always just about eating fruit. Following my last bite of this Macoun apple I’m eating, I flick out the seeds with a paring knife into a cup. Same goes for pears and their seeds. Early in summer, I spit out Nanking cherry seeds into a waiting vessel. All these seeds are for planting,
Seeds of these cold hardy plants won’t sprout as soon as they hit moist, warm dirt. If they did, the young seedlings would be snuffed out by winter cold. It is after a period of exposure to cool, moist conditions that they — thinking winter over — sprout. Seeds in dropping fruits, of course, enjoy this experience naturally and poke up through the ground first thing next spring,
Wanting to keep a close eye on my seedlings, I plant them in pots and seed flats rather than let them do what they would do naturally. After I had collected the seeds, I kept them dry, and now am ready to plant

them. This week I am sowing the seeds in potting soil in flats and in pots. Once given a good watering, the seed flats and pots get covered with a pane of glass to hold in moisture. Tucked against the north wall of my house, the seeds will sprout in spring,

Sometimes I cozy such seeds into plastic bags of moist potting soil in the refrigerator. The problem is that the seeds then  sprout in the bags in midwinter. Cool, not cold, temperatures are what fool the seeds into behaving as if winter’s over. About 1,000 hours, depending on the species and variety of plant, usually does the trick. In the refrigerator, temperatures are always cool; outdoors, only sometimes, and there, it’s not until late winter that the required 1,000 hours of cool temperatures have been fulfilled. It’s hard to provide ample light for an enthusiastic seedling growing in midwinter,
———————————————
Unless a plant self-pollinates and has been grown in isolation, with desirable plants selected each generation for many generations, seedlings are unlike their parents. So none of the fruits on the seedlings that grow from the seeds taken from Macoun, Golden Delicious, Liberty, Bosc, Maxine, and Clapp’s Favorite apples and pears will match the parents; they will most likely be inferior,
No problem; these seedlings are for rootstocks on which to graft stems of good-tasting varieties of apples and pears. Rootstocks are ready to graft after growing for one season,
Nanking cherries are an exception; no varieties are available. The seedlings, which show some variation, are all good-tasting, so no need anyway to graft,
———————————————-
Another batch of seeds I’m sowing is of more tropical-like plants: passionfruit and hardy orange. I write 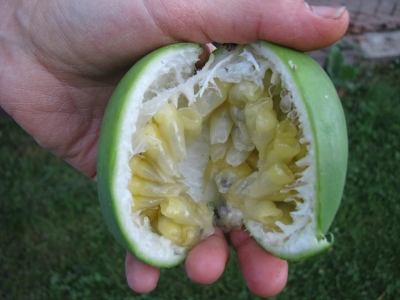 “tropical-like” because the passionfruit I’m planting is maypop (Passiflora incarnata) and the hardy orange is Poncirus trifoliata. Both should survive winter cold here. Both are also northern members of tropical or subtropical families, and their seed behavior reflects their tropical “roots.”

female eggs. In fact, many are apomyctic, that is, derived solely from mother plant tissue. No jumbling around of chromosomes to produce variable seedlings here. Apomyctic seedlings are clones, Flying Dragon in the case of my hardy orange seedlings,

A citrus or hardy orange fruit yields some apomyctic and some sexual seedlings, about 50% of each in the case of hardy orange,
As I admired Flying Dragon over the past few months, one way or another I had to make more plants. Cuttings taken a few months ago weren’t rooting and although the plant flowered, no fruits were evident. Then, last week, as leaves dropped from my plant — hardy orange parts ways with real oranges in being deciduous — I caught sight of a single orange orb perched on a stem. One fruit is plenty because they are very seedy. That single fruit, smaller than a golf ball, yielded 20 seeds,