With apologies to E. B. Browning: “How do I store [as in ‘preserve’] thee? Let me count the ways. I store thee to the depth and breadth and height a Mason jar can reach . . . “ And in other ways.

Red, ripe tomatoes, the essence of summer. How to capture that essence for a dark, snowy winter day? A few ways: Let me count the ways.

Canning tomatoes can be a  complicated, drawn out process, or something quick and easy. In the heat of summer, I choose the latter, merely filling a large pot a half-inch of water and then whole tomatoes from which any diseased or unripened areas have been excised. 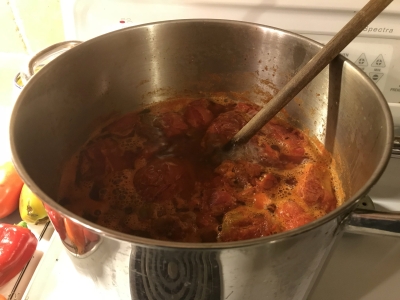 No de-skinning, de-seeding, or chopping. The pot is allowed to cool a bit after its volume has been reduced to one-half to two-thirds of the original volume.

Less than a minute with my immersion blender then homogenizes the works, readying the mix for canning jars that have been scrubbed clean — except for one more critical addition to each jar: 2 tablespoons of bottled lemon juice or 1⁄2 teaspoon of citric acid per quart of tomatoes. The reason for the lemon juice or citric acid is to make the mix more acidic. And the reason to make the mix more acidic is to prevent growth of the bacterium Clostridium botulinum which, you might guess from the name, causes botulism.

Tomatoes vary in their acidity. I actually bought a pH tester to test the acidity before adding the lemon juice or citric acid. The tomatoes tested at pH of 4.2. But tomatoes differ in their acidity, depending on variety (paste tomatoes are generally less acidic) and growing conditions; perhaps the next batch would not make the cut. So, just to make sure . . .

Next, canning lids are put in a small pot and covered with water which was just brought to a boil. I fish out a lid with a pair of tongs and lay it in place atop a jar, then screw it down secure with the jar’s metal ring. The rings need to be tightened just enough to seat each lid against the glass but not so tight as to prevent escape of gases when the jar is heated, the next step.

I use a pressure canner, which speeds processing because less time is needed at the higher temperatures that can be achieved under pressure. Fifteen minutes at 10 pounds (which puts the temperature at 240°F) does the job. Forty-five minutes would be needed when canning with a boiling water bath, and that doesn’t include the time needed to get enough water boiling to be able to submerge all the jars.

I carefully remove jars after their allotted time and let them cool.

Once cool, pressing down on the the center of each lid lets me know whether that jar has sealed well. The lid should not move down when pressed.

I failed to mention one more step early in my canning process, and that is the sorting out the San Marzano tomatoes. This variety makes the best-tasting sauce so we segregate it for single variety canning. In Italy, tomatoes canned with San Marzano variety tomatoes are specifically labelled as such. So are ours.

As I wrote, with the help of E. B. Browning, “Let me count the ways,” plural.

Years ago I pooh-poohed a friend’s suggestion to dry tomatoes, probably because he said eating them was “fun.” Then I tried drying some. They weren’t fun too eat but they sure taste good in winter, their intense flavor released as they are crumbled on salads or soaked in water and cooked with other vegetables. Not good on pizza, though; they burn.

Slices a quarter of an inch thick are good for drying. Layed on stacked trays in my dehydrator, with the temperature set at 130°F, the slices dry to leathery or brittle, depending on the ambient humidity, overnight. 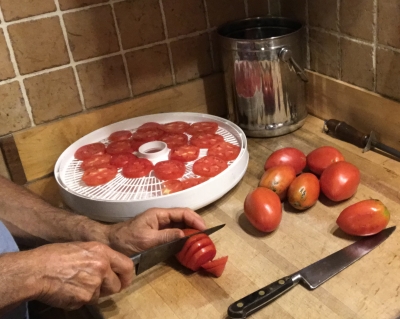 Once dry, the slices are packed into canning jars with the lids screwed down tightly to prevent air from entering.

I haven’t yet finished “counting the ways.” One more way: freezing. All that’s needed is to cut any bad spots from the fruit and put them into a freezer bag.

The frozen tomatoes add yet another tomato-y flavor and texture for winter. To me, they’re more like fresh tomatoes than either the canned or the dried ones. Fresh-cooked, of course, not fresh raw. Fresh cooked or frozen fresh, cooked, lends a different flavor and texture than canned.

Just popping the fresh fruit into the freezer is also a way to preserve peppers. To me, though, the taste of frozen peppers are a far cry from the fresh summer ones no matter how they are used. But then, ripe, red peppers are one of my favorite garden vegetables, so the bar is high for them in any other form.