You are here: Home1 / cloche

On December 2nd, my gardening season officially ended. It was brought to a screeching halt as a foot of heavy, white powder descended to democratically blanket my meadow, my vegetable beds, my terraces, and my deck. 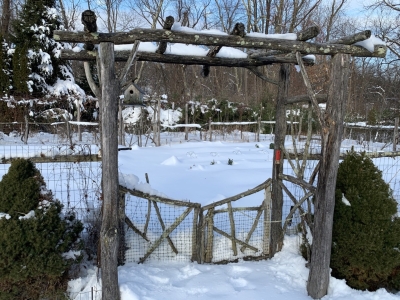 I have to admit that it was welcome as I had spent the previous few weeks furiously getting ready for the end. Compost now covers most of the vegetable beds. Wood chips and neighbors’ raked leaves lie thickly beneath berry bushes and recently planted Korean pine (for nuts), chestnut, and pear trees.

Left in place, the one tunnel protecting a bed in the vegetable garden would have been collapsed by a heavy snow; I dismantled it. This tunnel consisted of metal hoops, 4 feet apart, each 5 feet long with either end pushed into the ground at each edge of the bed. The row of hoops was covered with vented, clear plastic and then, for added cold protection, a layer of “row cover” (a diaphanous fabric that lets air, water, and some light penetrate while affording a few additional degrees of cold protection). 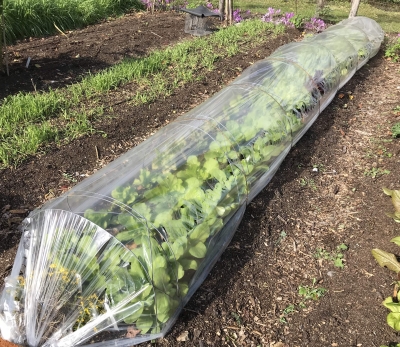 I secured the clear plastic and the row cover layers by “planting” another metal hoop over them, right where the first hoops were”planted.” This setup makes it easy to slide the layers up and down, as needed, to reach in for harvest. 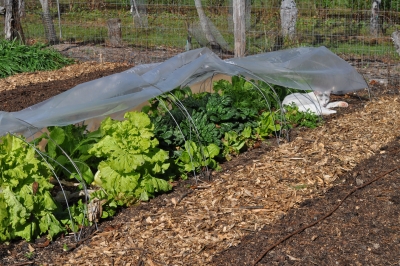 After dismantling the hoops and coverings, I picked over what remained. Cold  had turned the few heads of lettuce left in the tunnel to mush. Surprisingly, a few small heads of pac choi (the varieties Joi Choi and Prize Choi) and large heads of napa type Chinese cabbage (the variety Blues) were in pretty much perfect condition. 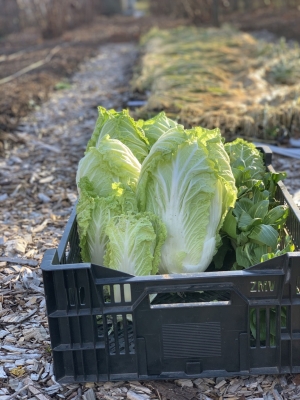 My surprise came about because I had checked my minimum-maximum thermometer which registered the minimum temperature this fall as having dipped as low as 11° Fahrenheit. That’s very good protection from a thin layer of clear plastic topped by a layer of row cover — coupled with what are evidently quite cold-hardy varieties of Chinese cabbage.

Cold protection has come a long way since I started gardening. Over the years, cold protection devices, commercial and home-made, have undergone various incarnations in my gardens. Early on, with a bow to traditional cloches, I cut bottoms off gallon glass jugs for mini-greenhouses over individual or groups of very small plants.

(Cloche, pronounced klōsh, is the French word for “bell.” The original cloches were large bell-shaped jars that 19th-century French market gardeners placed over plants in spring and fall to act as portable miniature greenhouses. At one time, these glass jars covered acres of fields outside Paris that supplied out-of-season vegetables to the city’s households and restaurants.)

The classic glass bell jars are still available but have some significant limitations. Because they’re made from heavy glass and are small, the air trapped within can quickly get too hot on sunny days, cooking plants. And close attention needs to be paid to ventilation. A professional gardening friend, trained many years in France, tells of trudging out to cloche-covered fields on bright, frosty mornings to slide a block of wood under one side of each cloche to vent it during sunny days. In late afternoon he’d walk the field kicking out the blocks, setting each cloche flat on the ground to seal the warm air in for the night.

Although modern versions of these individual cloches are not as elegant as the traditional glass bell jars, some offer the same or a better degree of frost protection, are made of lightweight materials, are easier to vent, and are more convenient to store.

Modern variations on the cloche include: Clear umbrellas, which fold and unfold for easy storage, with spike handles that hold them in place; lightweight, durable, and inexpensive plastic versions of the traditional glass jar cloche; plastic milk jugs with the bottoms cut and vented by opening the lid; waxed-paper Hot Kaps. These vary in the degree of cold protection they offer as well as the size of the area they protect.

Tunnel type cloches protect whole rows or beds of plants. My original tunnel cloches were ersatz, British-made Chase cloches, which cleverly held glass panes into a ventable barn shape. Placed end to end, they created a tunnel, mini-greenhouse. I originally made my own from straightened coat hangar wire, then got hold of the real thing. 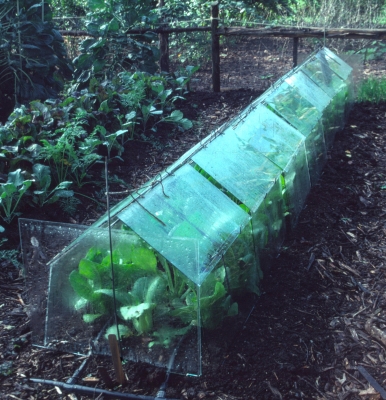 Problem was, I discovered, that they work best in climates where temperatures are moderated, such as in northern Europe or near large bodies of water. (Anybody in those locations want some Chase cloche wires?)

So I graduated to the much more effective but much less attractive tunnel cloches, or “tunnels,” I described above.