You are here: Home1 / climbing hydrangea

Horse Manure: Not Guilty, So On To Pruning

A dark cloud no longer hangs over my horse manure, that is, the horse manure that I occasionally truck over here to add to my compost piles. I wrote a few weeks ago about the possibility of herbicide that, when applied to hay, retains its toxic effect when an animal eats the hay and even, for a long time, after that animal’s manure has been composted or spread on the ground.
My herbicide residue concerns were soothed with a simple assay that showed satisfactory growth from bean seeds in both hay that was suspect and hay of known integrity. Also, the bedding in the horse manure is mostly wood shavings rather than hay.
But another ugly dragon kept raising its head above the manure. Another chemical, this time, Ivermectin, a de-worming medication given to horses (and other animals). Ivermectin or its metabolites might pass through the animal and injure soil dwelling creatures such as beneficial nematodes and earthworms. Past studies have shown negative effects on, for example, “dung fauna and degradation of faeces” (to quote a research paper from 2006).
Ivermectin is, admittedly, a very useful material, even useful in humans to combat lice, bedbugs, and some more frightening tropical afflictions such as river blindness and elephantiasis. Agriculture is always a balancing act, but I like to keep my soil-dwelling partners happy.
So I was gladdened when a veterinarian recently directed me to a Stanford University publication that summarized research findings on the environmental effects of Ivermectin. To whit: Ivermectin is excreted and it can affect earthworms, springtails, and other fauna. But it degrades quickly at summer temperatures (1-2 weeks, but much longer in winter) and within a day or two of exposure to bright sunlight. With temperatures within my compost bins reaching 150°F., or more, with the compost sitting many months before use, and with the compost being spread on top of the ground, little Ivermectin would end up in the soil. And soil anyway naturally has low levels of this compound.

Let’s look aboveground, at stems; there’s pruning to be started. With well over a foot of snow on the ground, I turn my attention to taller plants. The snow is actually an advantage because, with snowshoes on, I can reach more than a foot higher into the branches without a ladder. 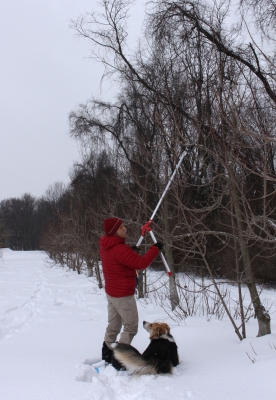 Sammy (the dog) and I pruning pawpaws

For now, I’m going to start with the easiest pruning, mostly with plants that don’t need regular pruning beyond removing dead, diseased, broken, and grossly misplaced branches. Right here, such plants include pawpaws, plums, cornelian cherries, and a teenage honeylocust tree. Light is important for fruit production from the fruit trees and, generally, to keep diseases and insects at bay, so I also prune away enough branches to let remaining branches bathe in sunlight.
I go at the pawpaws with one more goal in mind, to keep fruit from forming either too high in the tree or two far out on the limbs. Pawpaw trees will grow 15 to 25 feet high but I harvest fallen fruit from the ground. By my estimation, fruit can make a soft landing, undamaged, from a height of about 10 feet onto mulched ground. So I lop back the tops to weak side branches at about that height.
Each pawpaw flower is a multiple ovary, potentially spawning up to nine fruits, each of which can weigh more than half a pound. That’s a lot of weight perched onto the end of a branch, so I shorten long branches to decrease leverage of that fruit load.
(More about all types of pruning on all kinds of plants in my book, The Pruning Book.)

I actually did begin pruning a few weeks ago, before the first snow fall. The plant was hydrangea — no, not the common bigleaf hydrangea which has many people scratching their heads about how to prune, but climbing hydrangea (Hydrangea anomala subsp. petiolaris). 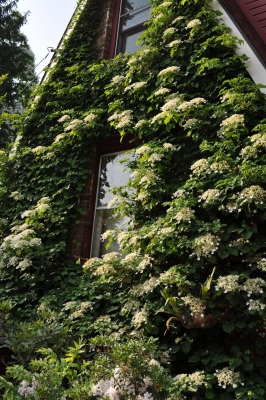 Climbing hydrangea is one of the most beautiful vines, even right now as the peeling, pale cinnamon, bark is in focus among the leafless stems. All summer long, the stems are clothed in lustrous green foliage and, in early, summer clusters of white flowers twinkle against that backdrop like stars in the dark sky.
As expected, the vine took a few years to get firmly established. Now it threatens to engulf my brick home except that I want to restrict it to only the north wall. Every year now, I prune back stems creeping like groping fingers around the east and west walls. And each year the flower stems reach further directly out from the wall, so I also shortened them. 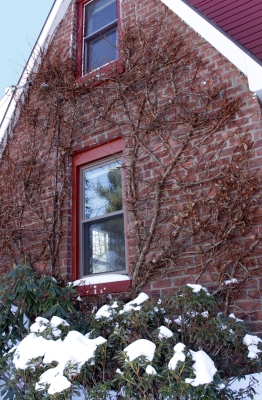 The present pruning doesn’t permanently subdue the plant. This summer, I’ll again shorten the wandering stems, and I’ll be back at it again next winter and for winters to come.