You are here: Home1 / buartnut

More Citrus in the Making

You wouldn’t think that a couple of small, green sprouts could elicit so much excitement. Especially this time of year, with vigorous, green shoots sprouting up all over the place. But they did, in me. Not that anyone else would notice the two sprouts.
The sprouts were from grafts I made a couple of months ago. Over the years I’ve done hundreds of successful grafts; these two were special.
The first was citrus, special because the trees are subtropical and evergreen. The many apples, pears, and plums that I’ve grafted over the years are deciduous. I graft them when they are leafless and just about ready to start growing. Because the grafts are leafless, the wood, as long as the graft union is sealed, won’t dry out.
Not so for citrus, more specifically for the stems I clipped off my potted Golden Nugget tangerine tree. What was needed, then was a rootstock on which to graft that stem. The result would be a Golden Nugget plant above the graft (which stays right where it is no matter how much the plant grows). Clipping all the leaves from the stem forestalled moisture loss.
My home is also home to kumquat, another citrus that lives in a pot here, outdoors in summer and in a sunny window in winter. A couple of February’s ago, I glanced down at the kumquat seeds I had just spit out from fruits I harvested and ate. Not being able to squander their potential, I planted them in pots. A decade might have gone by before they were old enough to bear fruit but, after two years, the pencil-thick stems were large enough for grafting. 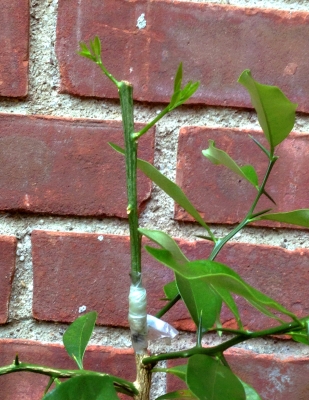 With kumquat rootstocks poised for the operation and Golden Nugget scions (the stem to be grafted atop the rootstock) stripped of leaves and also ready, the procedure was the same as for apple trees and other deciduous plants: matching, sloping cuts on rootstock and scion held in place by a wrapping with a rubber strip; covering the wound to prevent moisture loss. My usual choice of covering is Tree-Kote, which gets painted on, or Parafilm, a stretchy film that adheres to itself.
The citrus scion was fleshy enough to also lose moisture right through the bark. To prevent this, I wrapped the whole scion in the Parafilm. A blackened scion had followed previous attempts at grafting citrus without wrapping the stem.
A week or so ago, it was time to unwrap the Parafilm from around the stem. If the grafted parts were going to knit together, they should have done so by then. Lo and behold, a small, green sprout soon pushed out from the top bud of the scion.

Not all deciduous trees are as easy to graft as apple and pear. Nut trees in the Juglandaceae family, which includes black walnuts, English walnuts, butternuts, pecans, and hickories, are notoriously difficult. Part of the reason is because cutting a stem in spring, which is, of course, unavoidable when grafting, makes these trees bleed, messing up the works.
With a slew of failures at grafting this family under my belt, I needed to try again. The candidate this year was a nut tree called buartnut, and hybrid tree with a hybrid name, the latter a non-euphonious combination of the words “heartnut” and “butternut.” Heartnut is a Japanese species of walnut, notable mostly for how easily it cracks to yield two heart-shaped nutmeats. Butternut is a richly flavored nut borne on a native tree that is becoming increasingly rare because of a blight disease.
Buartnuts allegedly need cross-pollination to bear nuts. My tree, large and spreading though only about 15 years old, lacked a mate. The mate needn’t be a whole other tree; a branch from another tree, grafted on my tree, would suffice and avoid the need to plant a whole new tree or wait the years it would take to flower. Grafted branches bear much more quickly than new trees.
Fortunately, I knew of another buartnut tree that could provide pollination. Last winter, I clipped off a few of its stems, packed them in a plastic bag, wrapped the bag in a wet towel, and then packed that whole mess into another plastic bag and then into the refrigerator. There, they remained hydrated and dormant until needed. 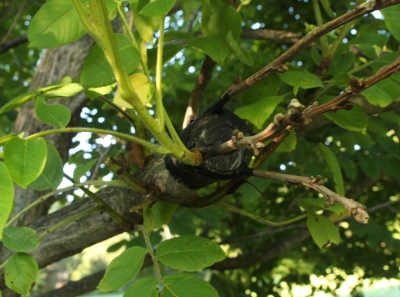 The key, I’ve been told, to grafting Juglandaceae, is to wait in spring until a spate of 80 degree plus weather is predicted. Conditions seemed right on a day last May. Because of past failures, I attempted numerous grafts, three different kinds: the bark graft, the banana graft, and the whip graft. To promote bleeding off-site rather than at the grafts, I slit stems below the grafts. I covered one of the bark grafts with a plastic bag and then, for shade so the stems wouldn’t cook, a paper bag.
Almost all the grafts failed. Except one. Just one stem of just one of the bark grafts (each of these bark grafts carries 4 or 5 stems) sprouted. How exciting!

Exciting goings-on in the blueberry patch also. Birds are flitting about every morning, enjoying a few berries despite our repeated efforts to secure any openings in the walk-in “Blueberry Temple.” I threaded some string to more tightly join the top and side netting. As previously, I think this will solve the problem.
Then again, this may be a Darwinian experiment. Birds never used to work their way into the Temple. Openings in the top netting are 1” across; I fear the net is breeding for smaller models of cedar waxwings and catbirds. Or perhaps smarter ones better at finagling their way to the blueberries