I finally am getting to eat some ripe mulberries this year, and they were — and are — very, very good. The wait wasn’t because the tree was too young. And anyway, mulberries are very quick to bear fruit, often the year after planting.

I got to eat fruit from my tree this year because resident birds have been kind enough to share some with me. Of course, it was not really kindness on their part. 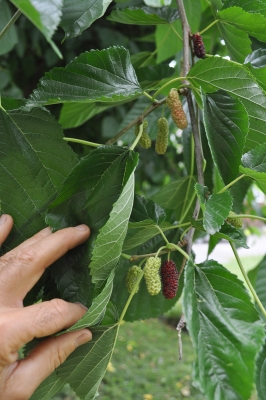 Birds also eat fruit for their juiciness, and the past weeks and weeks of abundant rainfall probably satisfied some of that need. The only other year I had plenty of mulberries — much more than this year — was a few years ago when 17-year cicadas descended upon here. All summer I awoke to their grating cacophony, but did feast on mulberries as birds feasted on the cicadas.

You might think it late in the season for mulberry fruits, which started ripening back in early July, to still be ripening. The variety name of my tree says it all: Illinois Everbearing. Not only is this variety everbearing, but it also has a very fine flavor, much better than the run-of-the-mill and ubiquitous wild mulberries whose fruit is usually too cloying. Illinois Everbearing’s sweetness is balanced with a bit of refreshing tartness.

Good as it is, Illinois Everbearing’s fruits cannot compare with that of black mulberry. The “black” refers to the species, Morus nigra. Illinois Everbearing is a hybrid of our native red mulberry, M. rubra, and white mulberry, M. alba, an Asian species that was introduced into our country about 200 years ago, liked it here, and mated with the native species. Black mulberry can only be grown in Mediterranean climates, so mine, in a large pot, bears only a handful of berries each year.

Some people contend that black mulberries adaptability is more widespread than mild winter climates. I have my doubts but I am going to graft a branch from my little tree onto some stems of some wild mulberries and see what happens. (The wild mulberries might either be white or red mulberries, or natural hybrids of the two; the color designations have nothing to do with the color of fruit a tree bears.) 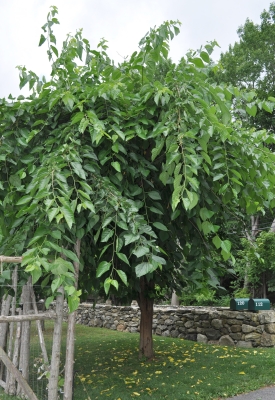 I’m happy enough with the long season, good flavor, and occasional harvest of Illinois Everbearing. Plus, it’s a pretty tree, and large, so the branches are now beyond reach of deer, who love to eat mulberry leaves.

I devote a whole chapter to mulberries, white, red, and black, in my book Uncommon Fruits for Every Garden.

Bringing my eyes down from the dark mulberries to ground level, and walking over to the vegetable garden, I take a close look at this year’s basil. Hmm. Very slight yellowing of some of the leaves. Could it be  . . . ? Yes, turning over one of those slightly chlorotic leaves I see tell-tale purplish brown spores, indicating downy mildew disease. 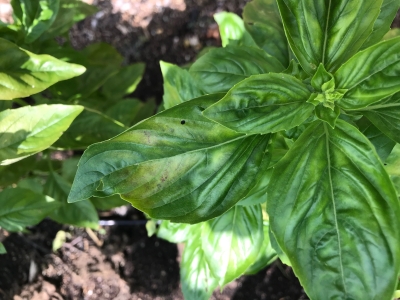 A relative newcomer to the garden scene, basil downy mildew (a different pathogen than cucumber downy mildew, grape downy mildew, etc.) arrived on the East Coast in 2007, made it to the West Coast by 2009, and to Hawaii by 2011. It hitchhike around on infected seed, infected plants, and infected leaves. 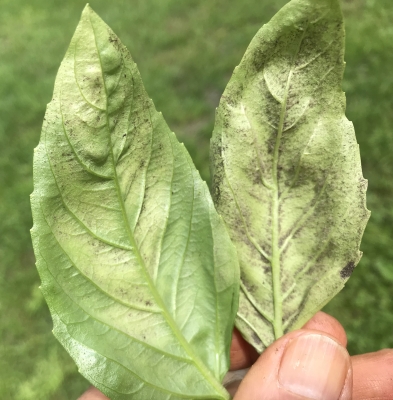 Some organic fungicides are allowed for controlling the scourge, but my basil mingles so intimately with other plants in the vegetable garden that I don’t consider that an option. Fortunately, other controls are feasible.

One thing would be to not mingle my basil so intimately with other plants. Sunlight is one nemesis of the mildew, as with most fungi. Better air circulation would also lower the humidity around the plants and speed drying of the foliage, also not to the liking of the mildew fungi.

Going one step further, Dr. Meg McGrath of Cornell University suggests growing basil in pots. Plants can be whisked under cover on cool nights, when dew threatens, or during rain or cloudy conditions.

Starting off with clean seed or plants would also limit infection. Not totally, though. Although the fungus does not overwinter in cold regions, given good (for the fungus) conditions, it can hitchhike up here over hundreds of miles.

Breeders are hard at work developing resistant varieties of basil, with some success. Among the resistant varieties are Amazel (shouldn’t the name be Amasil or Amazil?), Eleanor, Emma, Everleaf (Basil Pesto Party), Devotion, Obsession, and Thunderstruck. I’m growing Amazel and Everleaf this year. No sign of mildew on Amazel. Everleaf, this year, at least, has it as bad as my standard varieties.

None of the resistant mentioned varieties are immune to basil downy mildew, just resistant. So it pays to also give the plants a lot of sunlight and good air circulation, and consider pitted plants, for their mobility.

Fun herb fact: The word “herb” was borrowed from the old French word erbe, which is why we don’t — and the British didn’t, initially — pronounce the h. Scribes in the 15th century, influenced by their knowledge of Latin, started using the Latin word herba. But still, no one spoke the h. Fast forward to the mid-19th-century and, all of a sudden, dropping h’s became a marker of low social class among the Brits, so they dropped them.