You are here: Home1 / Argonaut

Thanksgiving is a most appropriate time to put together a truly American meal, one made up of native plants, many of which are easily grown, that might have shown up on the original Thanksgiving table about 400 years ago.

(The date of that first feast was 1623 but the date for celebrating Thanksgiving in all states— on the final Thursday in November — was not fixed until 1863, with a presidential proclamation. Lincoln hoped that a unified date throughout the country would help unify the nation during the divisive days of the Civil War. Not so. Confederate States refused to accept that date until the next decade, during Reconstruction. Another presidential proclamation, by F.D.R. changed the date to the 4th Thursday of November, in an attempt to boost the economy. Would a new date help now?)

On to garden history . . . Back in early November, I picked a 20 pound berry that was growing from my compost pile. Actually, I harvested about a dozen of these heavy berries. Don’t imagine them in terms of strawberries or blueberries. Imagine a winter squash, which botanically-speaking is a berry, a special kind of berry called a pepo. Squashes are native American fruits.

Twenty pounds is no lightweight for a squash. Nothing like the 2,023 pound (still a berry) record-holding pumpkin, of course, but big nonetheless. Especially so when you consider that mine weren’t grown to vie for any records, but for eating.

Argonaut is the variety name of my 20 pound berries. It seems to be a kind of butternut squash stretched out anywhere from 20 to 30 inches long and 8 inches across at its fattest point. It’s relatively easy to grow if you can figure out where to let the 20-foot-long vines trail. In May I had sown the seeds in 4-inch pots and then transplanted a few right atop my compost bin. I put another couple into compost-filled holes I had scooped out in a mountain of leaves (for future use, after rotting down into rich “leaf mold”) kindly deposited here by a local landscaper. 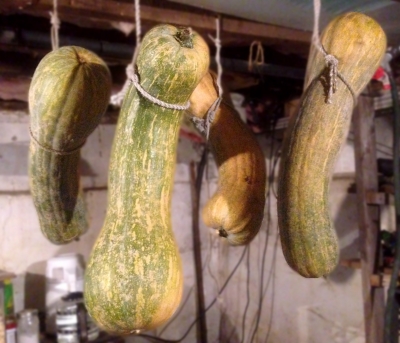 Argonaut needs a long season before the fruits turn buff tan ripe. Longer than my plants got, this year, at least, because only some of them had only some ripe color. Still, they taste very good, and squashes will ripen, to some degree, after harvest.

The question is what to do with a dozen humongous squashes. Ideal storage is in a cool room: my basement, where temperatures no and in the next few weeks will be in the low 50s. Mice occasionally make their way into my basement. They could make many meals of the squashes. I mouse-proofed each one by tying it with a sturdy length of rope in a noose around its neck, then hanging it from the basement rafters.

More Than a Snack Food

Corn is another native American food, with popcorn predating that first Thanksgiving in America by thousands of years. Kernels have been found in the remains of Central American settlements almost 7000 years old. Four hundred years ago, the Pawtuxet Indian Chief, Massasoit, showed up at the first Thanksgiving feast with a deerskin sack filled with popcorn, a food hitherto unknown to the colonists.

Popcorn is the corn I’ll bring to our Thanksgiving table. Most people eat popcorn as a snack, but there’s no reason it couldn’t stand-in for potatoes, rice, bread, or any other carbohydrate-rich foods. Popcorn has the advantage of always being whole grain, and being very quick and easy to prepare. 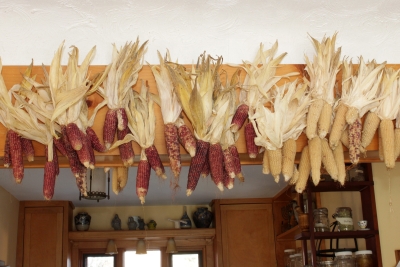 Corn was the best grain crop to grow in the rude conditions of a settler’s clearing. Little land preparation was needed, and the ripe ears could be left dangling on the stalks until there was time for harvest. I could grow it under “ruder” conditions, but I plant it in compost-enriched soil with drip irrigation for consistent water. Two 12-foot long by 3-foot wide beds provide enough popcorn to carry us through the year to the next harvest season.

Since harvest, a few weeks ago, unshelled ears of Pink Pearl and Dutch Butter popcorn have been hanging from the kitchen rafters, decoratively and conveniently at hand.

Cranberries are among the few native American fruits sold commercially.  Although they do not provide a great deal of nourishment, they spice up present and past holiday dinners.

Cranberries can be grown in a home garden if the soil is very acidic (sulfur will make it so if it is not), rich in organic matter, and has consistent moisture. A bog is not needed. 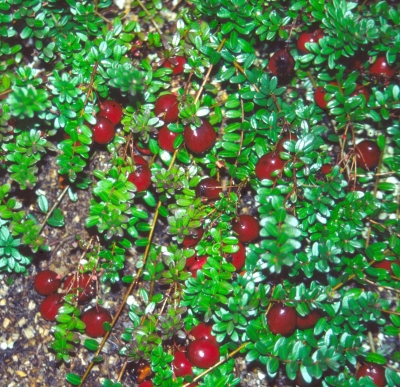 Given the right growing conditions, cranberries can be an ornamental, edible groundcover. I once planted them as such, along with the other edible, ornamentals lowbush blueberry and lingonberry, as well as rhododendron and mountain laurel, non-edibles that enjoy these same soil conditions. The cranberries grew too well, threatening to overtake the rest of the bed. Since they were not my favorites among all the plants in the bed, they no longer live there.

Many more native American plants, such as beans, groundnuts, and Jerusalem artichokes, can round out this Thanksgiving feast. And, of course, among non-plants, turkey.