You are here: Home1 / apple trees

Fruit for My Mouth, Flowers for My Eyes

As I write this, on December 1st, the Rabbi — that’s the Rabbi Samuel fig — is still ripening fruit in my barely heated greenhouse. That’s commendable. Not so commendable, however, is the flavor; cooler temperatures and sparse sunlight have taken their toll. The drooping fruits look ripe and ready to eat, inside and out, but they are no longer worth eating.

End of the fruiting season for Rabbi Samuel fig.

On the other hand, another fruit, Szukis American persimmons, hardly look edible but still have rich, sweet flavor. Outdoors, fruits of this variety of American persimmon cling to bare branches. Their orange skins once stretched almost to the point of breaking over the soft flesh within. Now, alternate freezing and thawing temperatures and drier air have sucked moisture and temper from the flesh, so the skins have shriveled and barely cling. Their darkening does nothing to increase the fruits’ visual appeal. 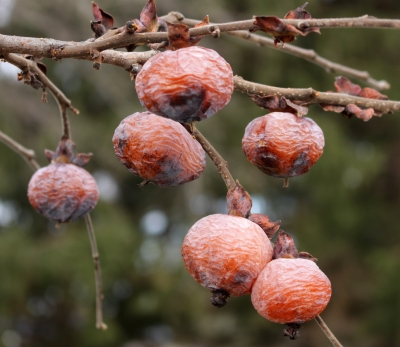 The ripe fruits are hard to distinguish, by eye, from the almost ripe fruits. The latter still retain some mouth-puckering astringency which has given American persimmons a bad name. An unripe persimmon “will draw a man’s mouth awrie with much torment” wrote Captain John Smith 400 years ago. I give Szukis’ branches a slight shake and only ripe fruits come raining to the ground, at which point the Captain’s further words ring true: “When [persimmon] is ripe, it is as delicious as an apricot.”

Man can’t live by bread alone; a feast for the eyes is also in order. Well, maybe not a feast, but an appetizer, some winter flowers. Probably the easiest and most longlasting of winter blossoms are those of African violet. Okay, okay, I know that African violets have been mostly associated with doilies, lace curtains, and other appurtenances of old ladies (nothing against old ladies).

Generally, I don’t even like the color violet. But African violet’s flowers do brighten up a windowsill that looks out upon a gray and brown landscape.

Now that I’ve gotten my secret attraction to African violets off my chest, let’s talk horticulture. African violet’s whorl of leaves, like those of many low-growing perennial flowers, is actually a compressed stem, one that has been telescoped down so that each leaf and associated node originates just a fraction of an inch above the next lower leaf. But there is some distance between those nodes, so over time the stem does slowly elongate, rising higher and higher out of the ground. And side branches occasionally sprout forth from the leaf axils. The result of all this is that the potted plant becomes, over time, so overgrown with layer upon layer of leaves that the plant no longer can gather enough energy to flower well.

African Violet in all its glory.

The solution to this problem is to make new plants and then chuck the old ones. All that’s needed to make a new plant is a leaf from an old plant and patience. So a few weeks ago I plucked a few leaves (a few, for insurance) from my old, overgrown African violet and plunged their stalks into a moist mix of peat moss and perlite. A plastic bag covering and held above the leaf cuttings by some twigs provided the needed humidity until roots could develop to keep the leaves turgid. Bright but indirect sunlight fueled, via photosynthesis, new root growth, and within a few weeks, resistance to a gentle tug on the leaves told me that roots had developed.

I removed the cover and now little plants are poking up through the ground alongside the leaf stalks. I’m going to transplant my rooted cuttings into larger pots and should, in a few weeks, be enjoying flowers. By then, I’ll have my knitting also ready.

On to less gender stereotyped gardening: tree planting. Picture the day before Thanksgiving, November 26th. A wet snow is falling and beginning to whiten the ground. In my garage are two sturdy, bare root apple trees, a Hudson’s Golden Gem and an Ashmead’s Kernel, recently arrived from Cummins Nursery and needing planting.

Fortunately, I prepared the plantings site a couple of weeks previously with a 4-inch-deep, broad circle of leaf compost, the most immediate purpose of which was to keep the ground from freezing. Rushing to beat out the snow, I pulled enough compost aside to make space to dig holes, spread tree roots out in each hole, backfilled the soil, sifting it around the roots by pressing with my fingers and bouncing the tree up and down, and then settled all into place with a couple of gallons of water per plant.

I like autumn for tree planting. Roots have opportunity to grow in still warm soil (especially if mulched) while stems won’t grow and need water until spring. The soil is crumbly and soft, in good condition for digging and planting. And autumn planting leaves one less thing to do in the flurry of spring gardening.

However, winter temperatures and furry creatures can be a hazard to autumn-planted trees. The first line of defense, to fend off  mice and rabbits and moderate temperatures on the trunk, is a spiral plastic tree guard. An 18” high cylinder of 1/2” hardware cloth provides further defense against mice and rabbits. Beyond that, a higher and wider cylinder of 2×4 fencing should fend off deer and my puppy Sammy. (Past puppies considered newly planted trees as playthings, fun to tug out of the ground.) And finally, the well-furnished, new tree goes into winter with some perfume, a deer-repellant spray, any of which is effective if applied before the plant gets nibbled and renewed monthly.

I expect to harvest the first apples from the new apple trees expected in 3 years.