You are here: Home1 / Design2 / BEAUTIFUL DESIGN AND UGLY BLIGHT

Who Made This Garden?

I visited a most beautiful garden this week, one in which all the elements of garden design were deftly combined. At ground level groundcovers presented pleasing and harmonious shades of green and varying leaf textures. Leafy plants, lichens, and mosses all contributed to the symphony, the whole scene knit together by large slabs of underlying rock.

In places, low-growing junipers and deciduous shrubs and trees brought the garden up from ground level. Particularly striking was a very large boulder atop of which grew some trees whose exposed roots embraced the boulder before reaching to the ground for water and nourishment. Green moss growing on the boulder erased any starkness from this vignette. 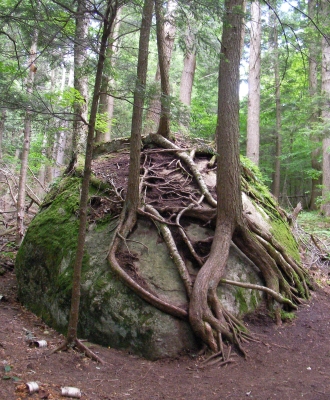 This garden also utilized what I like to call “luscious landscaping,” that is, the incorporation of dual purpose plants -– for beauty and for eating -– into the landscape. Lowbush blueberry, a plant whose dainty flowers hang like white bells in spring, whose healthy, green foliage ignites in crimson come fall, and whose stems glow red in winter, formed the bulk of the groundcover species. A few lingonberry plants interspersed here and there promised red berries in autumn and evergreen leaves as a foil for those red blueberry stems in winter.

And just where was this wonderful garden? Or gardens, I should say. They were in the high peaks of New York’s Adirondack mountains. The garden designer? God or one described by Darwin, take your pick. Beautiful, at any rate.

Blight Here in the Valley

Back down here on the flatlands, the word “blight” is often bantered around in connection with tomatoes this time of year – your tomatoes, my tomatoes, basically, everybody’s tomatoes! A few years ago, it was late blight (Phytophthera infestans) that was the blight that was of special interest. Attacking both tomatoes and potatoes, this is the same disease that caused the potato famine in Ireland in the 19th century.

Late blight was a problem in the northeast that year due to a particular confluence of events: infected tomato plants offered at “big box” stores gave the blight its start and rainy, humid conditions kept it going. 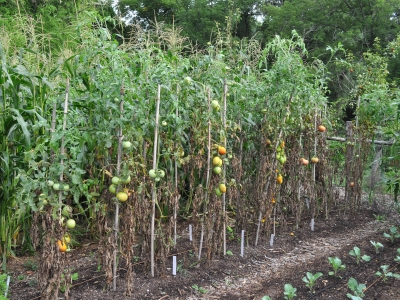 A few years ago; not this year.

The disease does not overwinter here in the north, except on infected potato tubers stored or left in the ground through winter. The way late blight arrives in the north is either on infected transplants or by hitchhiking up from southern fields, where it does overwinter, when weather conditions are just right. The spores can travel about 15 miles at a shot with the right winds coupled with cool, moist weather.

My tomato plants had their usual midsummer splotches and yellowing that year. I usually find pest problems more interesting than scary, I got a little worried about late blight. I tested for it by pulling a splotchy leaf off a plant, sliding it into a plastic bag, and waiting a day. White, fuzzy growth on the leaf would mean late blight. Testing was negative, although blight did eventually show up.

Only under the most severe conditions will I take special measures to control late blight. That year presented those conditions. I decided to spray my tomato plants, a measure to which I’d never before resorted. And it’s not because I grow mostly heirloom tomatoes; pretty much any and every tomato variety is susceptible to late blight. I used one of many copper sprays that are organically approved, still taking care not to dowse nearby other plants and to thoroughly protect myself while spraying.

That’s not to say all my tomato plants are the pictures of health this year, or any year. They do get some leaf yellowing and loss due to disease. Three diseases, in fact. One is the already mentioned late blight. The other two, which do rear their ugly heads reliably every year, are early blight and septoria leaf spot.

If you look closely at the leaf damage, you can tell which one(s) your tomatoes are hosting. Early blight (Alternaria solani), the most common of the three, marks leaves with dark-brown, round spots a half-inch in diameter, each surrounded by concentric rings. 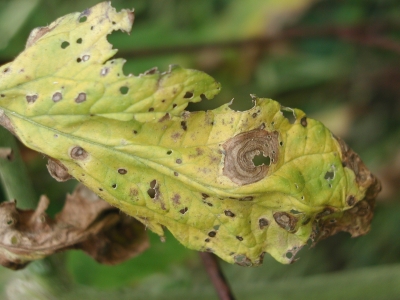 Septoria leaf spot (Septoria lycopsersici) causes spots that are small, round and gray, each surrounded by a single, dark margin. 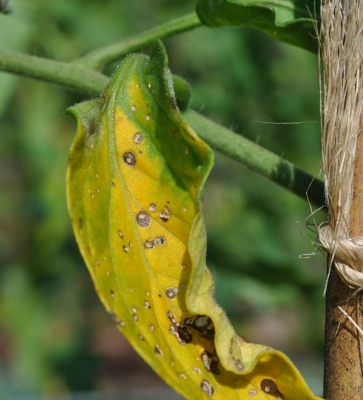 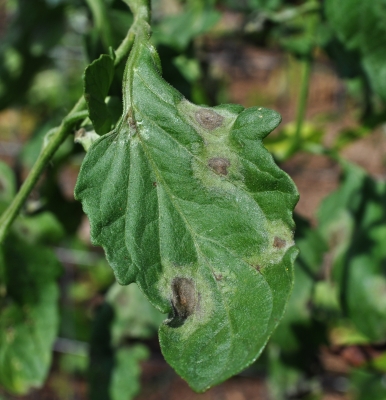 The names of any one of the leaf spot diseases is enough to conjure up fear of plague, but fortunately, all three can be lumped together when it comes to control. The first line of defense against any of the leaf-spot diseases is to keep disease spores away from tomato plants. Spores spend the winter in old plant debris, then are awakened and splashed onto new tomato leaves by rain during the growing season. Early blight and septoria spend the winter in old tomato refuse on the ground. Potato tubers can overwinter this far north on stored potato tubers that are planted out for the next season.

All of which makes a good case for a thorough garden cleanup each fall. At the end of the season I load up my garden cart and haul over to the compost pile old tomato and potato stems, leaves, and fruits.

During the growing season, any mulch — my choice is compost — keeps raindrops from splashing spores up onto plant leaves. Removing infected leaves during the growing season may also help control disease spread. I leave leaves intact, figuring more photosynthesis makes for stronger plants (except, of course, for any leaves too far gone to make a significant contribution to the plant).

Crop rotation each year moves tomato plants away from any spores left from the previous season’s crop. Plant tomatoes in a new location in the garden each year, never returning them to the same spot until four years have elapsed — admittedly a tall order in a small garden.

Another line of defense against leaf spot diseases, many diseases for that matter, is to create an environment inhospitable to them. Fungi thrive in dark, moist, humid places. Let plants bask in full sun without obstructions such as weeds, fences, or other garden plants that would slow air circulation. 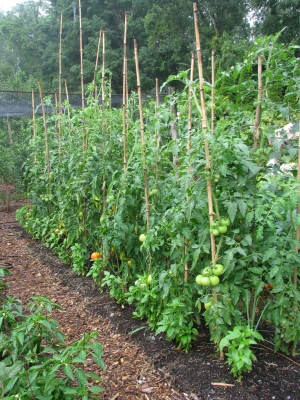 I train each tomato plant to a single stem, which is staked, putting distance between the leaves and any spores on the soil, and exposing the plant to better air circulation. Spaced 18 inches apart, the plants yield less per plant than tomato plants allowed to run wild, but because they utilize a third dimension — up — more tomatoes per land area. Also earlier and with bigger fruits. 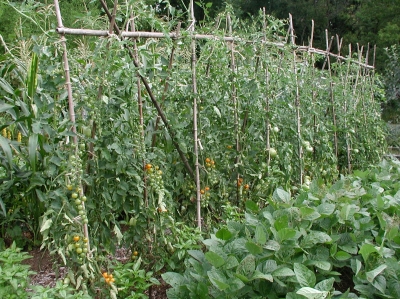