You are here: Home1 / Design2 / The Season Begins

I have one more important task to do before planting any vegetables this spring, and that is the annual mapping out of the garden, something I generally put off as long as possible.

In theory, mapping out my garden should be easy. I “rotate” what I plant in each bed so that no vegetable, or any of its relatives, grows in a given bed more frequently than every 3 years. 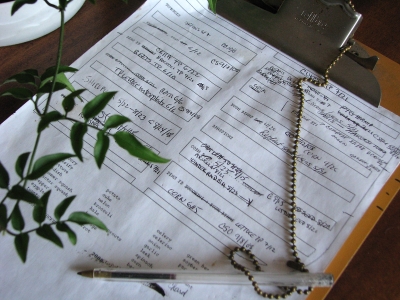 In practice, I mostly pay attention to rotation of plants most susceptible to diseases, which are cabbage and its kin (all in the Brassicaceae), cucumber and its kin (Cucurbitaceae), tomato and its kin (Solanaceae), beans and peas (Fabaceae), and corn (sweet or pop, in the Gramineae).

Crop rotation prevents buildup of disease pests that overwinter in the ground; removing host plants eventually starves them out. (Insect pest are more mobile, so crop rotation has less impact except in very large plantings.) So one year a bed might be home to cucumbers, melons or squashes. The next year that bed might host cabbage, broccoli, kale, Brussels sprouts, or cauliflower. Then tomatoes, peppers, potatoes, or eggplants. And finally, the fourth year, back to cucumbers. Simple enough. 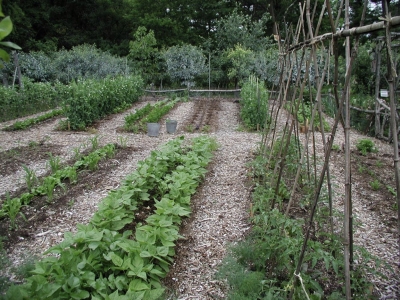 Root, leafy, and fruiting vegetables have somewhat different nutrient needs, so in the ideal garden these crops are rotated to make best use of soil nutrients.

And I do like to get the most out of my garden and confuse potential insect pests by grouping different kinds of plants within a bed.

Are you beginning to understand why I put off committing my garden plan to paper each spring?

Peas present one more wrinkle in my vegetable garden planning. 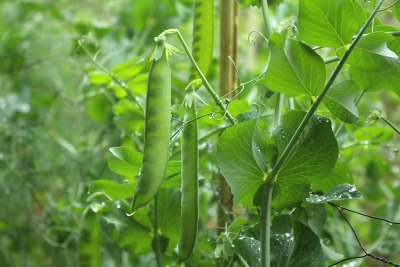 A few years ago they stopped bearing well, collapsing with yellowing foliage not long after they bore their first pods.

Further investigation has narrowed the problem to – probably – one of two diseases: fusarium or aphanomyces. Both, unfortunately, are long-lived in the soil so that a 3 year rotation does nothing to keep them in check.

Fortunately, I have two vegetable gardens. So, for the past few years I have banned peas from my north garden, planting them only in my south garden, in which they do get rotated. After a few more years, I’ll move the pea show to my north garden and leave my south garden pea-less. I’ve also been planting the varieties Green Arrow and Little Marvel, both of which are resistant to fusarium, at least.

Unfortunately, the problem is more likely aphanomyces, for which resistant varieties do not exist. Aphanomyces is a water mold, so thrives under wet conditions. So my tack will also be to keep any peas planted in my vegetable garden on the dry side, not even turning on the drip irrigation in those beds.

I’ll also be checking the plants more closely for symptoms. Plants infected by fusarium have a red discoloration to their roots. 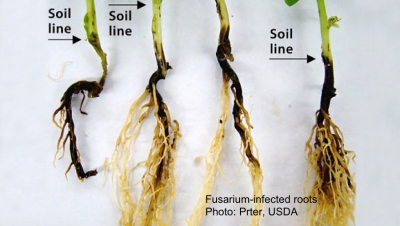 Plants infected by aphanomyces have fewer branch roots and what roots there are lack the plump, white appearance of healthy roots. 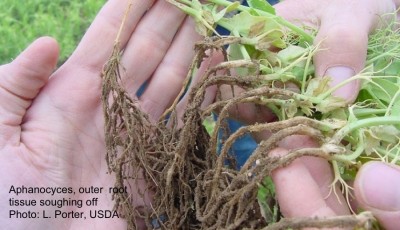 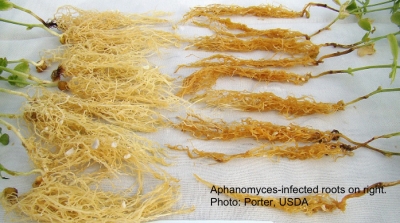 I’m also testing out root drenches with compost tea for my peas.

Yes, yes, I know I have dissed compost tea in the past. Mostly, its benefits, if any, have been overstated. But compost microbes have more chance of surviving in the dark, moist, nutrient-rich environment of the soil than on a leaf, where the stuff is often sprayed. I’m drenching the soil with the tea, not just giving the surface a spray, as usually recommended, so a lot more bacteria, fungi and friends are finding their way down there.

I see no reason (and research does not support) of going to the trouble of making the usual compost tea, which is aerated and might be fortified with such things as molasses. 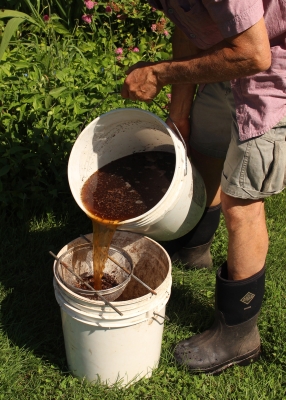 My tea is nothing more than the liquid strained from compost soaked in water, then applied with a watering can at the base of the pea plants.

I’ve done this for a couple of seasons but have nothing definite to report yet. The hard part is sacrificing a bed as a control. Perhaps this year. 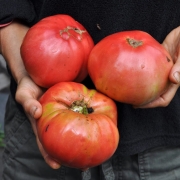 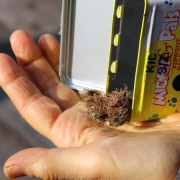 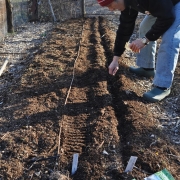 Increasing My Hyacinthal HoldingsA Podcast and a Workshop
Scroll to top