You are here: Home1 / river birch

Get your taps in. It’s syrup weather. Maple syrup. At least here in New York’s Hudson Valley, the sunny days in the 40s with nights in the 20s that are predicted should get the sap flowing.

I say “should” because I haven’t yet checked sap buckets that I hung out on the trees a few weeks ago when winter temperatures suddenly turned warm; it was sap weather back then. That day was hopeful: I drilled holes an inch and a half deep, lightly hammered in the spiles, hung buckets, and attached covers over the buckets. Frigid days and nights that descended soon after that kept sap flow in abeyance.

My “sugar bush” amounts to only three sugar maple trees. I used to have four, but a large tree that was a truly magnificent representative of its species began an irreversible path to its death.

“Maple decline” is a disease complex brought on by some combination of drought, soil compaction, road salt, root damage, and air pollution. Upper branches are usually the first to go, and once decline begins, secondary fungi and insects speed the process along.

I’m not sure about my tree, though, because its lower branches were the first to go. Also, the tree grows along the back edge of my property, where it’s been shielded from those usual causes for decline.

One more contributor to decline is overtapping. I plead not guilty. My fading tree was larger than the 8 or10 inch minimum diameter for tapping, and I only tapped it once, when the tree, it turned out, was already going downhill. The lack of sap flow was what prompted me to see all this. And then I noticed many rows of sapsucker holes in the bark. 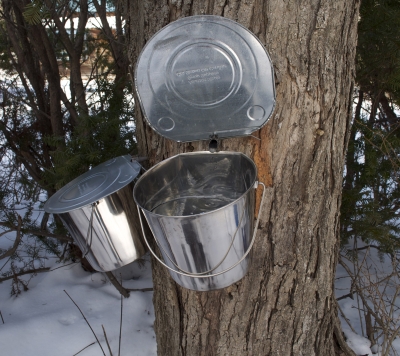 My three other, healthy maples might yield me only a quart of finished syrup. The reasons? One quart is enough for me, so I’m tapping only one of them. Also, they’re relatively young. I planted those three trees about 25 years ago, and they’re now only about 8 inches in diameter.

I highly recommend planting trees, for their beauty, for what food they might offer, and for the mere satisfaction of watching the plants grow. Especially if they are small when planted. Small trees also establish quickly to require less aftercare, often soon outgrowing their initially larger compatriots. Those three maple trees? From one perspective, it seems like a long time ago that I dug holes and set the saplings in the ground; from another perspective, it seems like I planted them, walked away, then turned right around to find that these young ‘uns have grown into bona fide trees!

I may end up with more sap than planned, but not maple sap. Along with the three sugar maples I planted way back when, I also planted three river birches (Betula nigra). They grow, appropriate to their name, in a wet area just out of a swale through which water runs in spring, each a clump of a half dozen or so sturdy trunks reaching skyward to about 35 feet.

Maple might be the heaviest sap producing tree, but it’s not the only kid on the block. Many people tap their black walnut trees. Call me provincial, but black walnut syrup, much as I love the nuts themselves, has no appeal me even though I’ve never tasted it.

Birch syrup though . . . mmm. Never tasted that one either, but it sounds good. Three birch taps should offer an ample amount for tasting. 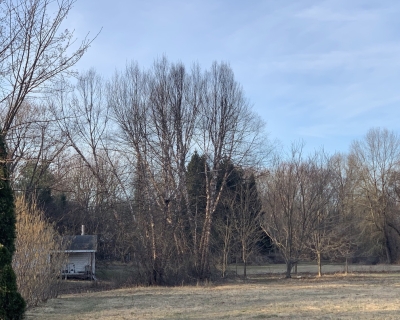 What a Funny Name

I don’t need to see the small, pebbly-skinned, orange orbs on grocers’ shelves to know that it’s kumquat season. My own Meiwa kumquat is looking very pretty, with a good crop of fruit staring out from their backdrop of glossy, forest-green leaves. I’ve trained the plant as a “standard,” that is, as a miniature tree with a crown of branches perched atop a four foot trunk. 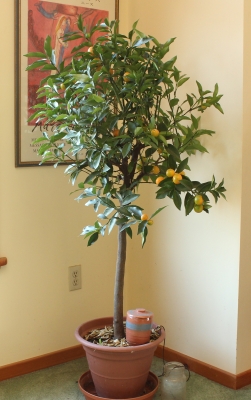 The present crop is my best ever, and traces its success back to last spring. In previous years, I was too timid with pruning. And pruning is necessary, every year. Pruning keeps the plant from growing disproportionately large for its pot -– or my house — and coaxes growth of new, fruiting wood.

The roots also get pruned each year to make space for new potting soil for root growth and nutrients. I laid down the plant and pot to easily slide out the root ball. After slicing an inch or two of roots and potting soil from all around the outside of the root ball, back into the pot the plant went, with new potting soil packed in the space between the shaven root ball and the inside edge of the pot. The seemingly brutal treatment took place last year just as the garden awoke in yellow blossoms from daffodils.

As soon as weather warmed, new sprouts began to grow. By midsummer, the plant was fragrant with blossoms. By late summer, little, green fruits were forming which, with careful watering, survived the environment change as the plant moved indoors in October. The plant stood at attention in a sunny window in the cool bedroom for weeks, and a couple of months ago, the fruits started turning orange. They are now ripe and delicious!