You are here: Home1 / pineapple guava

As flaming red petals drop to the ground beneath my pomegranate bush, I’m not hopeful. Sure, the flowers are beautiful, but the plant is here to give me fruit.

To survive winters here in New York’s mid-Hudson Valley (Zone 5), my plant’s home is in a large flowerpot which I cart into cold storage in late December and back outdoors or into the greenhouse in late winter or early spring. Even my cold-hardy variety, Salatavski, from western Asia, would die to ground level if planted outdoors. The roots would survive that much cold because of moderated below ground temperatures, but new stems that would rise from ground level would need to be more than a year old before flowering. 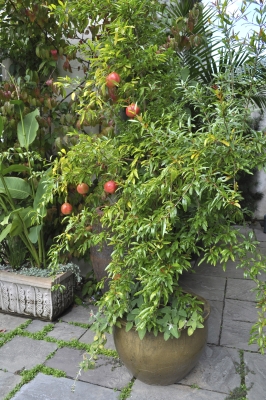 Potted pomegranate, but NOT mine

Growing in a pot, my pomegranate (and other potted fruit plants) need regular pruning and repotting. To prune the pomegranate, I snip off young suckers growing from ground level, shorten lanky stems, and thin out stems where congested. I repot the plant every 2 or 3 years, cutting off roots and potting soil from around the root ball to make room for new potting soil.

When flowers do appear, which they do over the course of a few weeks, I dab their faces with an artists’ brush. Going from flower to flower spreads the pollen from male flowers to the female parts (stigmas) of the  hermaphroditic flowers. 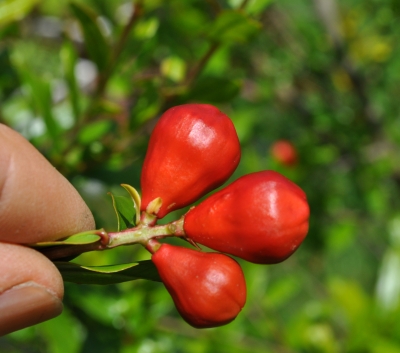 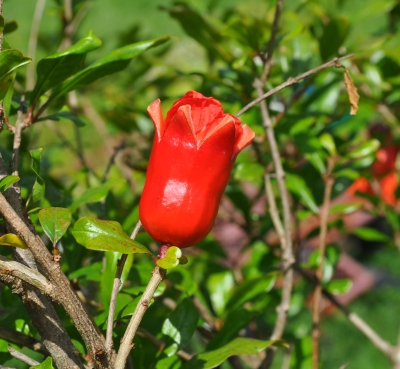 Then I wait, my eyes concentrating on each flower and hoping to see the base swelling. Problem is most, some year all, the flowers open and then drop. Occasionally, in past years, a flower or two has swelled into a mini-pomegranate. Then also dropped. 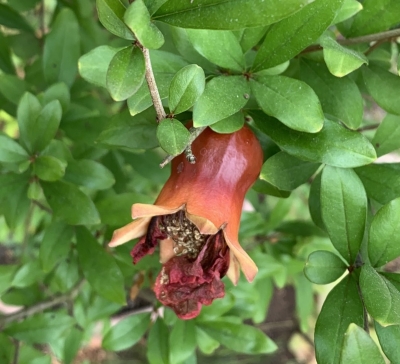 I’ve ministered to this plant for years and it has never rewarded me with a single fruit. Help! Any suggestions?

Not So Idle Threats

Every summer, as my pomegranate drops its last flowers, I’ve threatened it with the same fate I wrought upon another of my subtropical fruit plants, pineapple guava. Beneath the thin, green skin of this torpedo-shaped fruit lies a gelatinous center with a minty pineapple flavor. 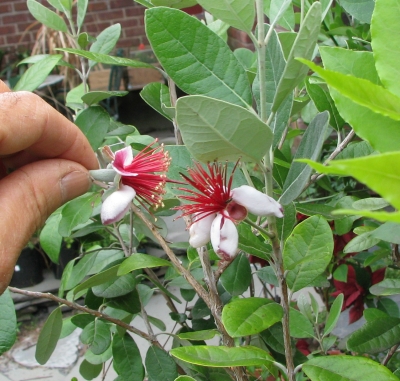 Over the course of growing this fruit for many years, I did harvest a few, small fruits from this plant, but not enough to keep me from reincarnating it as compost. (The flowers, however, reliably produced, sport the most delicious, fleshy petals of any that I’ve taste, with a strong, sweet minty flavor.)

A Most Delicious Fruit

Not all has been failure with my growing subtropical fruits.

My most recent success has been with Pakistani mulberry, Morus macroura, native to Tibet, the Himalayas, and mountainous regions of Indochina. I first tasted this fruit a few years ago at a nursery in Washington State and was swept away by the delicious flavor, sweet with enough tartness to make it interesting, and a strong berry undertone. (Yes, mulberry does have “berry” in its name, but botanically, it’s not a berry; it’s a “multiple fruit.”)

Besides having great flavor, Pakistani fruit is also notable for its enormous size, each one elongating, when ripe, to between three and five inches! 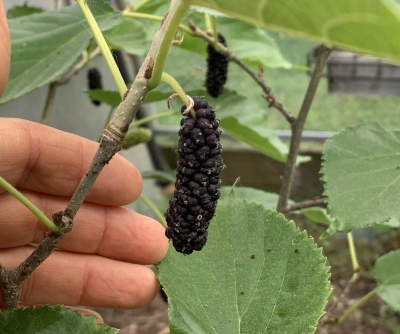 Pakistani mulberry is easy to grow and needs no particular coaxing to bear plenty of fruit, which it does over the course of a few weeks. Mine grows in a pot measuring a little over a foot wide, with the tree rising about four feet high. Fruits are borne on new shoots that grow off older stems, which keeps the tree very manageable. Shortening those older stems each year makes it easier to muscle the plant through doorways to move it indoors for winter and then back outdoors when weather warms a little.

My longest term and greatest success with subtropical plants has been, of course, with figs. (I write “of course” because I’ve written a whole book whose content is described by its title, Growing Figs in Cold Climates, and now is available as a video of a webinar I have presented on that topic.)

Like mulberries, to which they are related, figs — most varieties — can bear fruit on new shoots that grow off older branches. 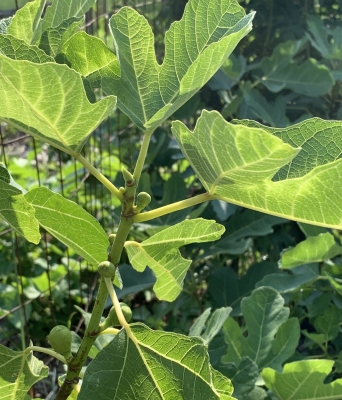 So, like mulberry, the plants can be pruned back some so they’re more manageable to be protected from bitter winter cold. An in-ground plant, then, could be protected from bitter winter cold by being swaddled upright or lowered to the ground, even trained to grow along the ground; a potted plant is more easily maneuvered into a garage, unheated basement, or other cool location for its winter rest.

Right now, there’s nothing for me to do with my figs except watch them grow. Small figlets now sit in the plants’ leaf nodes. They’ll just sit there, doing nothing, for a seemingly long time. Once ripening time draws near, the figs suddenly puff up, becoming soft and juicy and developing a honey sweet, rich flavor.