You are here: Home1 / nashi 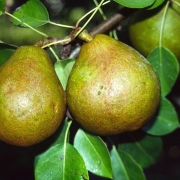 So Much From Which to Choose 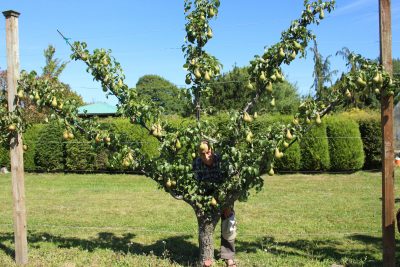 Of all the common tree fruits, pears are the easiest to grow — and not just here in New York’s Hudson Valley. My site is admittedly poor for tree fruits, the flat lowland acting like a reservoir into which cold, damp air flows, leading to increased threats from diseases and late frosts. Proximity to acres and acres of forest provides haven for insect pests.

But I’m not complaining; the air might be bad for apples, peaches, cherries, plums, and apricots, but underfoot is rich, well-drained, rock-free river bottom soil that grows very nice vegetables, berries, and many uncommon fruits such as persimmons, cornelian cherries, and kiwifruits. And pears.

Of the more than 3,000 varieties of pears, only a handful are well-known. I figured, as with apples, there must be many varieties better or as good-tasting as the few usually offered in markets. Back in 2004, twenty dwarf apple trees that I’d planted were nearing the end of their productive life. So I dug them out, which left me with space for a number of dwarf or semi-dwarf pear trees. But what varieties to plant? I sought suggestions from other fruit growers, from nursery websites and catalogues (especially Raintree Nursery and Cummins Nursery), from the USDA Pear Germplasm Repository, and books such as the 100-year-old tome The Pears of New York, finally settling on sixteen varieties (listed at the end of this blog post to avoid boring you if you don’t want such detail).