You are here: Home1 / kiwifruits

Apples a Bust, Pears a Success, Gooseberries a Bust, etc.

Early autumn is a good time for me to find a sunny spot on the terrace with a comfortable chair, pluck a bunch of grapes from the arbor overhead, and ponder the fruits of this year’s labors. And I mean “fruits,” literally: what were my successes, what were my failures, and what do future seasons hold?

To many people, to too many people, “fruit” means apples, the equivalence having deep roots since pomum is Latin for both apple and fruit. My apple crop this year, whether measured in pounds or number of fruits, is zero. Among my excuses are the wrong rootstock for the site, trees still recovering from last year’s onslaught of 17-year cicada egg-laying, apples’ pest problems making them among the most difficult fruits to grow east of the Rocky Mountains, and my low-lying valley location and surrounding forests further exacerbating pest problems.

Still, the rich flavor of the apples — when I do get some — keeps me trying. Next year I’m replanting with five new trees: Hudson’s Golden Gem, Macoun, Ashmead’s Kernel, Pitmaston Pineapple, and Liberty, all on Geneva 30 rootstocks. This year, I welcomed the time not needed in caring for the trees.

Pears did surprisingly well considering the extensive cicada damage they also endured. But pears always do well, especially the Asian pears. The challenge with European pears is ripening them to perfection. They need to be picked before they are ripe, chilled for a couple of weeks if they are an early maturing variety, then ripened in a cool room. As soon as the first fruits drop, I keep an eye out for a slight change in skin color for those fruits still hanging from branches, then take them if they separate with an easy snap when lifted and twisted from the branch.

Despite being relatively easy to grow, pears are underappreciated as  garden fruit — these days, at least. One-hundred and fifty years ago, you might have perused 70 varieties in a nursery catalog; a hundred years ago, perhaps 30 varieties; in today’s catalogs, I count a dozen or so varieties. Not all my two dozen or so varieties are bearing yet. So far, the best of the lot are the buttery sweet Magness and spicy Seckel.

But let me get back to my failures; get them out of the way. Hardy kiwifruits, both Actinidia arguta and A. kolomikta had uncharacteristically light crops. The same goes for pawpaws, whose branches have, except for this fall, every year been weighted down with a heavy load of fruit, some branches even breaking. It’s most convenient to point my finger at the weather, the winter cold, for barren kiwi vines and pawpaw trees. Not that it was as cold as many past winters, but it did stay cold for longer periods.

The gooseberry crop looked very promising until late June, which is when my chickens discovered them (or remembered where they were). Gooseberries are usually very reliable so I’m optimistic about the future of eating berries from the two dozen or so dessert varieties I grow. I downsized my flock from seven to three chickens (and added two ducks), and plan to erect temporary fencing during the few weeks that the berries ripen in future years.

Big crops presented themselves, as usual, on various mulberry varieties and gumi. Birds swooped in to gobble them up. Last year, with all the cicadas to feed on, birds ignored both these fruits. Geraldi Dwarf mulberry grows only a few feet high so I’ll throw a net over it next year and let birds enjoy the other mulberry varieties, if they so choose.

The Very Sweet Taste of Success(es)

Enough talk about failures. On to successes . . . blueberries, my favorite and most reliable fruit, bore in abundance, as always. Sixteen bushes; about 150 quarts. Mmmmm. 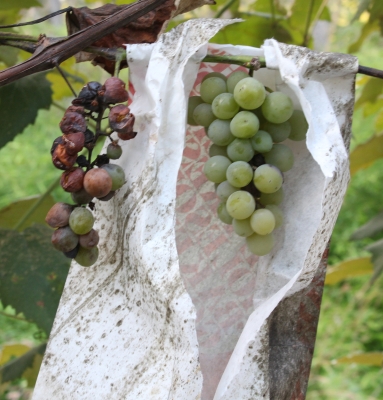 Rain earlier in the season threatened grapes with disease. I enclosed about 75 bunches in white bakery bags, stapled shut, to fend off bees and wasps, diseases, and birds. The crop was in such abundance that harvest has been aplenty even from unbagged bunches. Actually, too “aplenty” from the variety Swenson’s Red, causing individual berries in bunches to ripen unevenly. Next year, I’ll prune more severely, sacrificing total yield while increasing quality and even ripening of fruits that remain.

Once unbagged grapes of a given variety have been harvested and eaten, we move on to the bagged grapes of that variety. Peeling back the white paper has generally revealed bunches that look perfect and taste delectable. Particularly tasty this year have been Glenora Seedless, Somerset Seedless, Mars, Swenson’s White, and Brianna.

And finally, another of my no-fail, no-spray, no-prune fruits: American persimmon, specifically the varieties Mohler and Szukis. Mohler has been ripening for about a month, dropping a dozen or so fruits daily, which I pick up from the ground.  My ducks are especially fond of these fruits, and waddle, staring longingly within, around the outside perimeter of the low, temporary fence that keeps them at bay. (They do get to eat fruits that drop beyond the fence.)

The soft fruits taste like dried apricots that have been plumped in water, dipped in honey, and given a dash of spice. Mohler and Szukis are almost totally lacking in the puckery astringency common to many American persimmons. To remove any last traces of astringency, I subject fruits to a treatment used in Japan with Asian persimmons: alcohol. Freshly harvest fruits go into a bowl with a tablespoon of rye (locally made Coppersea Raw Rye), covered, for a day. The alcohol finishes ripening the fruits, keeps fruit flies at bay, and adds a nice punch to the flavor.

Too many people shy away from growing fruits because they are perceived as too difficult to grow. They can be; or not. Success comes from choosing the right fruits to grow, looking beyond apples, peaches, cherries, and the other usual fare. Success also comes from growing a wide variety fruits. (All this is covered in my newest book, Grow Fruit Naturally.) This year’s apple and gooseberry failures are hardly noticed with the abundance of blueberries, persimmons, and pears. And did I mention European black currants, red currants, and strawberries?