You are here: Home1 / Israel

Now I feel foolish buying olives. I recently returned from visiting Israel where there were olive trees everywhere. Irrigated plots of greenery thrived in the broad expanses of the otherwise grays and browns of the desert. Trees popped up here and there in backyards and front yards of homes in streets lined with apartment buildings as well as along cobblestone streets in rural areas. Trees were even prominent in city parks, either as self-sown wildings in less tended areas or as formal plantings. 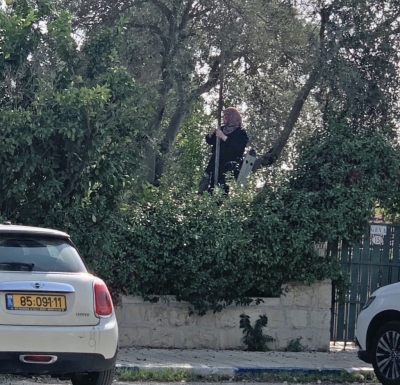 And oodles of ripe or ripening olives were clinging to branches or littering the ground. Need some hand lotion? Just pluck a ripe olive, squeeze it gently, and spread out the fresh oil that drips onto your hand.

Want some olives for eating? Not so fast. Fresh-picked ripe or green olives are extremely bitter (due to oleuropein). That bitterness is removed with brine, multiple changes of water or lye solution followed by fermentation. My favorite olives are “naturally, sun-cured,” which, I imagine, means left hanging on the tree a long, long time. The dried, ripe olives I found still-clinging to branches tasted awful! 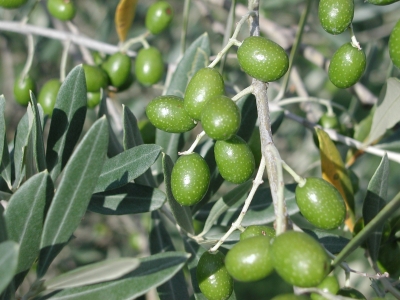 I was tempted to harvest some olives to bring home. A few other people had similar ideas, as evidenced by one woman on a ladder in a park in Jerusalem. Of course, these people were only miles or less from home; I was 5,000 plus miles from home. I let the olives be.

I actually grow olives here in the Hudson Valley, in a large container that spends summers outdoors basking in sunlight and winters in my cold basement near a large window. I should say that I grow an olive tree, rather than olives. My maximum harvest has been a half-dozen olives — which I did let hang for a long, long time, at which point they tasted delicious. 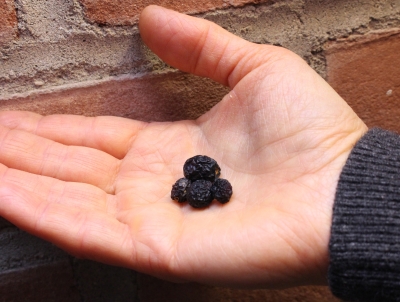 Another of my favorite Mediterranean fruits also growing in abundance in as many guises as olive in Israel was pomegranate. Unfortunately, I just missed the harvest of this fruit. All that remained on wild plants were a few red arils still clinging to darkened portions of skins.  Fruits must have been ripe somewhere because ripe fruits and fresh squeezed juice were available in markets and and street carts everywhere. 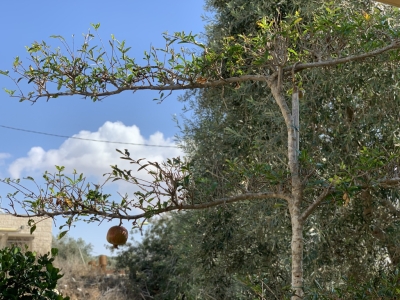 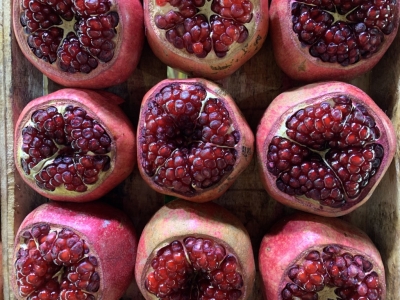 I, of course, also grow pomegranate, similarly to olive except that, being deciduous, this plant does not need light in winter. It spends those months in a dark, walk-in cooler.

Every year I threaten my plant with a walk to the compost pile — to no avail.

The third plant of the triumvirate of my favorite Mediterranean fruits is, of course, figs, which I saw in abundance in Israel mostly in wild settings. The plants lacked fruit, except for a few with small, green figlets that will either drop or ripen next spring. Fig is rather unique in its fruiting habit, able to bear fruit on one-year-old wood as well as on new, growing shoots, and the latter crop just keeps forming and ripening as long as growing conditions are to its liking.

One old tree growing in a courtyard in charming town of Sfad was hosting an old friend  — or, rather, enemy — of mine, fig scale insects. I’ve battled it one my greenhouse figs.

Figs were available in the markets but I was reluctant to even try them knowing that figs must be dead ripe to taste good. At that, stage they can hardly be transported more than arm’s length from hand to mouth. 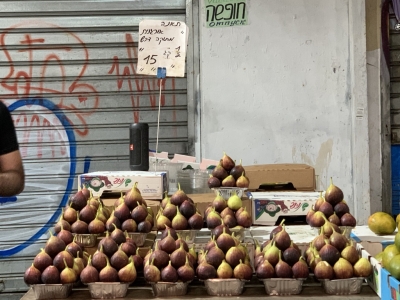 Figs are one Mediterranean fruit that I grow with great success, both in my greenhouse (minimum winter temperature 37°F) and, wintering in my walk-in cooler and summering outdoors, in pots like my pomegranate. Figs are generally easy to grow because of their unique bearing habit, their lack of need for pollination, and their general tolerance for abuse.

My last day I broke down and, against my better judgement, bought some figs. Mine are better.