You are here: Home1 / fertilization 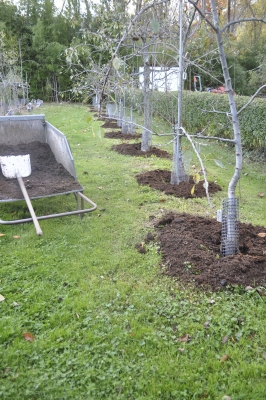 Remember the song lyrics: “House built on a weak foundation will not stand, no, no”? Well, the same goes for plants. (Plant with a weak root system will not be healthy, no, no.) Fertilization in the fall, rather than in winter, spring, or summer, promotes strong root systems in plants.

By the time a fertilizer applied in late winter or early spring gets into a plant, shoots are building up steam and need to be fed. Fertilization in summer forces succulent shoot growth late in the season, and this type of growth is susceptible to damage from ensuing cold.

The nutrient plants are most hungry for is nitrogen. But nitrogen is also the most evanescent of nutrients in the soil, subject to leaching down through the soil by rainwater or floating off into the air as a gas. The goal is to apply nitrogen so that it can be taken up by plants in the fall, with some left over to remain in the soil through winter and be in place for plant use next spring.

Two conditions foster nitrogen loss as gas. The first is a waterlogged soil. If you’re growing most cultivated plants — yellow flag iris, marsh marigold, rice, and cranberry are some exceptions — your soil should not be waterlogged, aside from considerations about nitrogen. (Roots need to breathe in order to function.) Nitrogen also evaporates from manure that is left exposed to sun and wind on top of the soil. Manure either should be dug into the soil right after spreading, or composted, after which it can be spread on top of the soil, or dug in.

Leaching of nitrogen fertilizer is a more common and serious problem, especially on sandy soils. The way to prevent leaching is to apply a form of nitrogen that either is not readily soluble, or that clings to the soil particles. Most chemical fertilizers — whether from a bag of 10-10-10, 5-10-10, or any other formulation — are soluble, although a few are specially formulated to release nitrogen slowly. 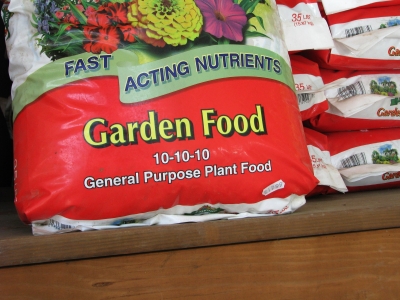 Rather than wade through the chemical jargon, nitrogen loss through the winter can be averted by using an organic nitrogen fertilizer. Nitrogen in such fertilizers, with the exception of blood meal, is locked up and held in an insoluble form. As soil microbes solubilize the nitrogen locked up in organic fertilizers, it is released first as ammonium nitrogen. So by using an organic nitrogen source, the nitrogen is not soluble to begin with, and when it becomes soluble through the action of microbes, it’s in a form that clings to the soil particles and not wash out of the soil. 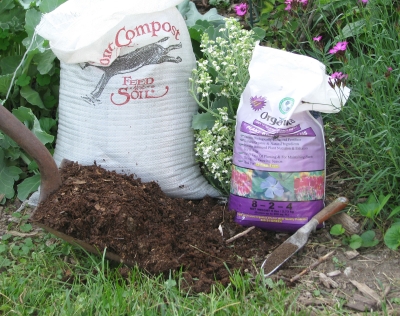 (Except in very acidic soils, other soil microbes then go on to convert ammonium nitrogen to nitrate nitrogen. This reaction screeches almost to a standstill at temperatures below 50 degrees Fahrenheit, so the ammonium nitrogen can just sit there, clinging to soil particles, until roots reawaken in late winter or early spring.)

Common sources of organic nitrogen include soybean meal, cottonseed meal, fish meal, and manure. Hoof and horn meal, leather dust, feather dust, and hair are esoteric sources, though plants will make use of them as if they were just ordinary, organic fertilizers. Even organic mulches, such as wood chips, straw, and leaves, will nourish the ground as they decompose over time. 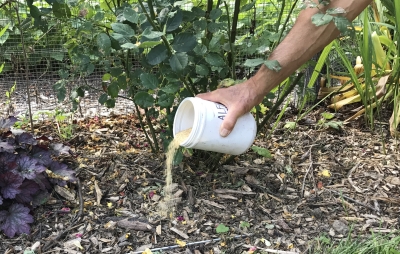 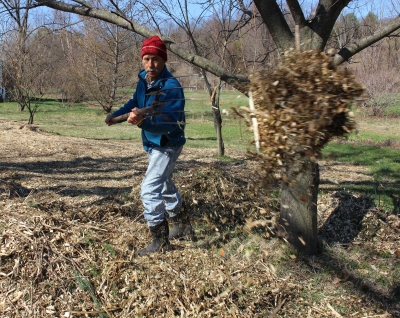 The Cadillac of fertilizers is compost. Compost offers a slew of nutrients, in addition to nitrogen, released slowly into the soil as microbes work away on it. Compost — most organic fertilizers, in fact — are not the ticket for a starving plant that needs a quick fix of food. 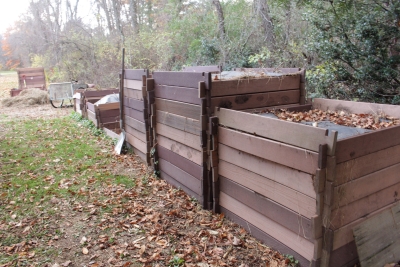 Every year I spread compost an inch deep beneath especially hungry plants like vegetables and young trees and shrubs to keep them well fed. Less hungry plants get one of the above-mentioned organic mulches. The benefits of these applications continue, trailing off, for a few years, so annual applications build up continual reserves of soil nutrients, doled out by soil microbes, that translate to healthy plants and soil.

(More details about fertilization can be found in my book Weedless Gardening.)