You are here: Home1 / cherry

In Which I Emulate George Washington

It’s about 10 years since I planted the cherry tree, a sweet, self-pollinating variety called Stella, on  dwarfing rootstock. During that time, the trunk swelled to about 7 inches in diameter and the branches shot skyward to 20 feet.

Stella is now gone, and it was all my doing. She took ten years to grow but only about an hour to cut down (with my new Stihl cordless electric chain saw, which I highly recommend). Afterlife of her trunk is as firewood, her branches as chipped mulch.

I warned Stella, who never bore one cherry, that this was her last chance. Finally, this spring she was loaded with blossoms, for the first time, followed by a good crop of developing cherries. A couple of weeks later, all the cherries were gone, except for two green ones I noticed on a cut branch. The weather could not have been at fault, nor birds at this early stage in the game. My guess is either an insect, probably plum curculio, or that the tree from the nursery was mislabeled, and it wasn’t Stella. Most varieties of sweet cherry need another variety nearby to set fruit.

She was pretty, but not pretty enough to grow as a strictly ornamental plant.

Waiting to replace Stella was a citrus(!) tree, a tree I could not have planted even a couple or years ago.

One reason I couldn’t have planted this tree is because it wasn’t a citrus tree back then. It’s a plant called hardy orange, previously assigned the genus and species Poncirus trifoliata. It’s always been a close relative of citrus, even used as a rootstock on which to graft commercial citrus trees. Only recently has it been fully welcomed into the fold and re-assigned the botanical name Citrus trifoliate. So previously I would have been planting a Poncirus but now I planted a Citrus. Same plant, different name.

The other reason I couldn’t have — or shouldn’t have — planted hardy orange under any name previously is because it’s only just barely winter hardy here. Winters of a few years ago were consistently colder and would have killed the plant down to the ground.

With stems cut back from cold, the plant would never have borne flowers, which have the look and delicious fragrance of other citrus flowers, or fruits, which look just like golfball-sized oranges. The flavor of the fruit is nothing to rave about, citrus-y yes, but also very sour, bitter, and not very juicy. Used with restraint, though, the fruits can be used for home-grown citrus flavoring.

The stems themselves, and their ominous thorns are hardy orange’s selling points here. The plant is evergreen, not because it holds onto its leaves through winter but because the stems are bright green year ‘round. My hardy orange is the variety Flying Dragon, whose twisting and turning stems are lined with ominously large, recurved — and also green — thorns.

Flying Dragon is a very interestingly attractive plant that can be used as flavoring, which is more that could have been said for my Stella.

Except for Stella cherries, this year is shaping up to be an excellent year for fruits, even apples, plums, and other tree fruits, which are always chancy on my farmden, which is a naturally poor site for fruit growing.

Among many other fruits in the offing is a bumper crop of bright red, gold-flecked gumi fruits (Eleaegnus multiflora). The fruits followed sweet-smelling blossoms that perfumed the air earlier in the season and are an ornamental adjunct to the silvery leaves. Plus, the fruits have good flavor if picked thoroughly ripe.

The birds are having a field day with the gumis, so I only get to eat the fruits in their puckery stage when just that hint of good flavor can be detected in the background.

I’ve hung old CD’s among gumi’s branches, also among my mulberries’ branches, hoping the flashes of reflected light will scare birds away. It probably won’t because visual deterrents, when they are effective, are so mostly against flocking birds. The gumis are being enjoyed mostly by robins and catbirds. 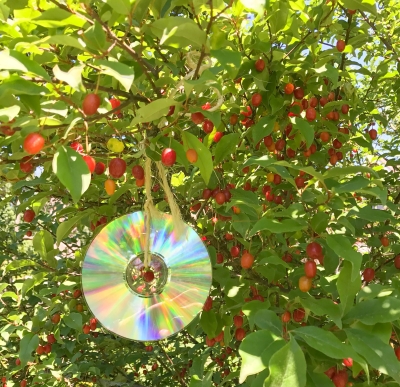 Let the birds have their fun. Black currants, which birds ignore, are also now ripe. And blueberries — my favorite — are ripening, and safe from birds enclosed in the netted “blueberry temple.”