You are here: Home1 / balsam fir

Ah, to sit by the fire on a cold winter’s eve. The fire’s warmth suffuses me with somnolence and drives into the air a resinous, woodsy aroma from my fresh cut balsam fir branches draped about the room or steaming on the woodstove. 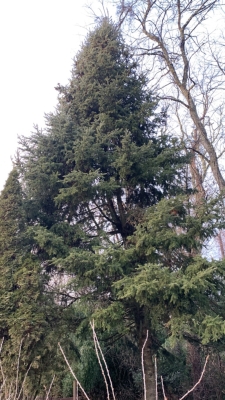 Balsam fir (Abies balsamea) would be an oddity amongst my plants. Here in the colder part of Zone 5, blackberries and some of my grapes have been pushed to their northern limits. Balsam fir would be unique in being a plant pushed to its southern limit. Most of my plants require well-drained soils. Balsam fir grows in well-drained soil, but it also will grow in swampy land, even very acidic (pH 5.0-6.0), swampy land

Balsam fir is native from northern New England to the tundra and mountaintops further south. I live in lowland. In those cold, moist locales where they are native, the trees grow slowly to become dense, pyramidal spires 50 feet tall with dark, shiny green, flattened needles. (Flattened needles are one way to distinguish firs from spruces, Picea species, which have rounded needles.)

Long ago I realized that it might be just too hot here in summer to grow balsam fir. Numerous books that I consulted warned about the futility of trying to grow balsam fir where it’s not native. Excessive heat would cause the needles to fall prematurely, leaving the tree, after a few decades, thinned out and unkempt. The prognosis for successful growing of balsam fir here seemed slim.

So I looked into getting my balsamy aromas elsewhere. Many plants yield “true” balsam, an aroma based on resins or oleoresins containing benzoic acid, cinnamic acid, or both. It’s too cold here, though, to grow most plants with this true balsam aroma: Balsam of Peru and Balsam of Tolu, from Myroxylon pereirae and M. balsamum, respectively, both trees of Central America; and liquid storax, a balsam from Liquidambar orientalis, a tree of Asia Minor, or from the Javanese plant Altingia excelsa.

One plant that is hardy here and does yield true balsam is sweetgum (Liquidambar styraciflua), which yields a balsam known as liquidambar, or copal, balsam. One problem with sweetgum is that it’s not an evergreen, so would not fill the bill for aromatic, winter greenery. A very pretty tree, though. 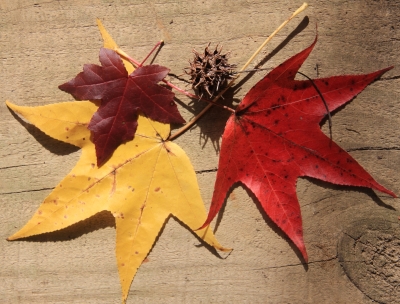 I emphasized “true” balsam above because there are other balsams that are something less than “true,” which means they lack both benzoic and cinnamic acids. Balsam fir, whose balsam goes under the names of Canada balsam or Canada turpentine, does not yield a true balsam. Two other less-than-true balsams are Balm of Gilead (Mecca balsam), from the Middle Eastern plant Commiphora opobalsamum, and Gurjun balsam, from Indian species of Dipterocarpus. Here, cold would snuff out the life of either of these two plants.

The question of winter survival is a moot point for annual plants, and there are two annuals with “balsam” in their name. One of these is garden balsam, Impatiens balsamina, a relative of impatiens. I’ve occasionally grown this very pretty, old-fashioned annual, but don’t recall any woody, resinous odor. 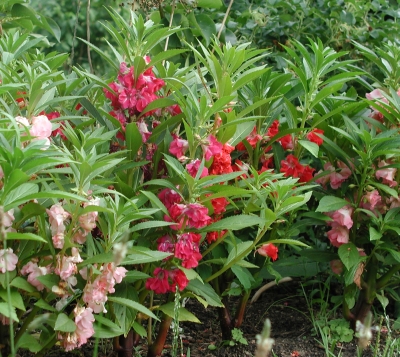 Another balsam is balsam apple, Momordia balsamina, a vining cucumber relative which produces gherkin-shaped, yellowish red “apples.” I’ve never grown balsam apple, but doubt it has the desired aroma. None of its relatives that I have met — winter squashes, summer squashes, gourds, pumpkins, and luffas — have any odor of balsam.

I Give Balsam Fir a Try Anyway

So where did this leave me for my balsamy winter greenery? Eighty years ago I could have just gone out and bought a Christmas tree. Balsam fir was the most popular Christmas tree until the 1930s. Then, its general popularity was superseded by Scotch pine, which grows faster and holds its needles better.

Almost 30 years ago, the poor prognosis notwithstanding, I went ahead and planted a few foot-high balsam fir seedlings in a partly shaded rear portion of my yard. The soil there is rich and perfectly drained. 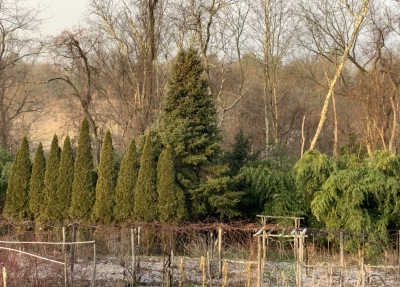 Trees took well to their new home. Unfortunately, our puppy Stick liked to play with the trees, not to their benefit. Fortunately, one tree escaped his antics. That tree is still alive, actually more than alive. I can cut all the aromatic branches I want from this robust, now 36.4 foot high tree!