You are here: Home1 / workhop 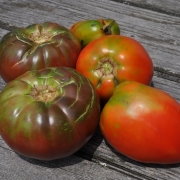 Actually, the explanation is not why tomatoes plucked from my vines taste so good but, rather, why the perfect, red orbs — called “tomatoes” — dumped onto supermarket shelves don’t taste so good. For this study, agricultural scientist Harry Klee, at the University of Florida, gathered together a whole lot of heirloom and modern tomato varieties and enlisted a whole lot of people to taste and rate them.
Followup chemical and statistical analysis pointed the finger at the balance of sugars and acids as one important component of flavor. Modern tomatoes bear so heavily that there’s less sugars to go around, so flavor suffers. For a similar reason, I avoid growing “determinate” tomatoes (listed on the seed packet or in the variety description), which are varieties that make flowers and fruits at the ends of, rather than along, their stems. The determinate growth habit results in fewer leaves per fruit; leaves, along with sunlight, are what puts sweetness and other aromas into tomato fruits.
Dr. Klee also found that, besides sugars and acids, heirloom tomato varieties have certain flavor components lacking in modern tomatoes, some of which enhance any sweetness. Geranial, which has a lemony aroma and is used in perfumery, is just one such component; it’s also present in a wild basil (Ocimum gratissimum), orange, lemongrass, and, of course, lemon.
——————————————–
The other bit of pertinent tomato research has to do with color. Nice, on those commercial tomatoes, eh? If you eat with your eyes, the color will make your mouth water. If you eat with your mouth, probably not.
In recent decades, tomatoes have been bred to color up uniformly to a nice, red color. Recent research shows that the gene that makes for that uniform coloring was a mutation of a gene that helped make tomatoes flavorful. Before ripening, the uniform ripening tomatoes are pale green rather than the deep green of tomatoes without the mutated gene. Dark green fruits harvest more of the sun’s energy than light green fruits; more green means more photosynthesis and more sugars and other flavor components. That ripening mutation, stumbled upon by breeders about 70 years ago, was widely adopted and has resulted in those beautiful orbs that have lined supermarket shelves and have even been often offered at some farmers’ markets for many years.
Using genetic engineering, researchers confirmed their findings by creating tomatoes that stayed dark green before ripening and then ripened uniformly red. As expected, laboratory analysis showed that the fruits had more sugars and other flavor components than fruits with only the uniform ripening gene mutation. Nobody ate the “Frankentomatoes.”

So beauty is not only skin deep in tomatoes.
The best heirloom varieties also seem to share some superficial characteristics. Potato-leafed (with smooth leaf edges) tomatoes, such as Brandywine and Prudens Purple, generally make tasty fruits. So-called oxheart varieties (pinkish skins and heart-shaped fruits), such as Oxheart, Orange Russian, and Hungarian Heart, also are rich and flavorful. The same can be said for dark varieties, such as Black Krim, Black Crimson, and Black Prince.
——————————————–
Hybrid tomatoes don’t have to be less flavorful than heirloom varieties. They don’t have to be bred for maximum production at the expense of flavor and/or to ripen uniformly red. But they usually are.
The familiar Sungold and the less familiar Carmello are two flavorful hybrid varieties in my garden. In my opinion, Sungold is far and away the best tasting cherry tomato (and also a beautiful persimmon orange color). Carmello is quite tasty and actually does ripen into perfectly red orbs.
Nonetheless, for unabashed flavor whether sliced with onions and olives in salad, laid in slivers on dark bread with cheese, or cooked into a sauce, heirloom tomatoes are my number one choice.
Which brings me to Cherokee Purple, the first one of which ripened today. It was very tasty and not at all pretty.
https://leereich.com/wp-content/uploads/2012/08/Tomatoes-Cherokee-Purple-Amish-Paste.jpg 726 1024 Lee A. Reich https://leereich.com/wp-content/uploads/2022/12/header-home-link-247x54-2.png Lee A. Reich2012-08-08 20:13:002014-07-14 15:17:50Upcoming Workshops & Cracking, Red Tomatoes