You are here: Home1 / variety 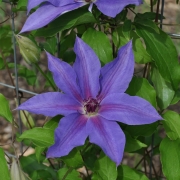 Last minute notice: Come visit my farmden, in real life. As part of the Garden Conservancy Open Days program, I’ll be hosting visitors between 10am and 4pm. For more information about this visit or other sites, contact the Garden Conservancy (www.gardenconservancy.org).
————————————————————
Letting a few clematis plants grow is the closest I’ve come to playing the lottery. It looks like I’ve won, judging from the first flower that opened last week.
Let me explain. I have a half dozen or so clematis plants of named varieties that I got from nurseries. A few years ago, I started noticing small plants — seedlings of the named varieties, especially from near a Nelly Moser plant — sprouting near the mother plants. I meant to save a couple, I even transplanted some, but these first seedlings succumbed to neglect. More recently, I’ve paid closer attention to the seedlings, especially those that sprouted fortuitously near the fence around the vegetable garden.
The gamble was that some seedlings would be garden-worthy. (Not that big a gamble; if not garden-worthy, I could just dig them out and walk them to the compost pile.) Named varieties of clematis, such as

My seedlings arose from seeds that dropped from a pollinated flower, that is, the seedlings are the result of the sexual union of pollen and egg cells. Whatever jumbling around of genes happened during that union will be reflected in the plants’ growth and flowers.
My first seedling flower spread open clear, blue petals — beautiful. It’s a keeper. If I deem it truly and uniquely spectacular, I could give it a name and multiply it asexually to spread the joy. Then it would become a named variety or, to use the more professionably acceptable term, “cultivar,” from the words “cultivated variety.” The word “cultivar” grates on my ears; I refuse to use it.
——————————————-
That unspeakable “c” word came about because the word “variety”was too general; it could mean two different things, plantwise. One meaning is a garden variety, as in Nelly Moser clematis. The other kind of “variety” is a botanical variety.
In the classification of plants, a botanical variety is a subclassification sometimes occurring within a

Botanists have not chosen to bastardize the English language with so ugly a word as “botanivar” tomean a “botanical variety.” Likewise, there’s no reason for horticulturalists to bastardize our language with the word “cultivar.” I’ll stick with “cultivated variety” or, if the sense is obvious, just “variety.”
——————————————-
The flowering habit of my clematis seedlings is also of interest. That is, when does it flower? Some clematis flower only on new growth, which means they flower later in the season. Some clematis flower only on old growth, which means they flower early in the season. And still other clematis flower on both new and old growth, which means they flower early and late, over a long season.
As I detail in my book, The Pruning Book, pruning technique varies depending on a clematis plant’s flowering habit. Early bloomers are best pruned right after they finish blooming. Late bloomers are pruned before growth begins for the season. And you do a little of both for plants that bloom early and late. (My book groups cultivars — whoops, I mean varieties — of clematis according to their flowering habits and pruning needs.)
My seedlings have mostly appeared near the “feet” of Nelly Moser, which flowers early in the season, so

presumably will be similarly inclined. That is the case with the seedling that recently unfolded its blossoms. But it could flower again this season.