You are here: Home1 / turnip greens 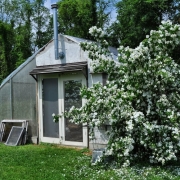 Check it out! New video up at www.youtube.com/leereichfarmden showing step-by-step preparation of weedless beds in autumn.
—————————————————-
Some people consider owning a Porsche Boxer to be a luxury; I consider crunching through winter snow to the greenhouse and picking a fresh head of lettuce to be a luxury. This lettuce-y luxury must be earned at a price that is more than monetary. It was a couple of weeks ago that I started paying for part of this year and next.
The goal is to harvest a head of lettuce every day from now through winter and on into next spring. That takes planning.
So at the end of August I filled a 4 by 6 inch seed flat with potting soil and sprinkled a different variety of lettuce into each of four mini-furrows. Covered with a pane of glass and watered, the seeds soon sprouted,

and after the sprouts grew for a week or two I delicately lifted individual seedlings out of the flat by their tiny leaves. Each sprout went into a waiting hole dibbled into a larger flat filled with potting soil, this time a flat where each sprout got its own cell.

Another payment: Today I spread an inch depth of compost in each permanent planting bed in the greenhouse. (Excepted were two beds, one awaiting the ripening of two more melons and the other that will be ripening cucumbers for the next few weeks.) Into the beds went seeds of various cool weather greens — mâche, arugula, mustard, minutina (also known as erba stella), and baby bok choi — as well as a few different varieties of lettuce.
Yet another payment: Towards the end of the month, I’ll lift out the lettuce seedlings that I transplanted into seed flats and plant them about 8 inches apart in any remaining beds.
All this planting may seem hectic or redundant but there is method to the madness. These greens tend to bolt (go to seed) when the weather is warm and days are sufficiently long. Sown too soon for winter, and they do just that. They’re ruined. On the other hand, autumn and early winter days are short and temperatures are cool to cold which makes for very slow growth. If plants are too small going to autumn, they don’t grow large enough to amount to anything until February or March.
So plants have to be big enough, but not too big going into autumn. How big is best depends on the plant, in some cases even the variety of plant. Plants grown from seed planted directly in the ground seem to bolt less readily than plants grown from transplants. All of which is why I grow a little of everything every which way at various times.
Although I’ve gardened for decades, my greenhouse experience spans only 13 years; perhaps after another 10 years I’ll know just when to sow everything to ensure a steady supply of fresh salads all winter.
————————————————
“Payment” for my lettuce-y luxuries is too strong a term. All this ground preparation, sowing, and transplanting really just extends the fun of gardening into the winter months. And, did I mention weeding. What fun it is in winter. Really!
————————————————
It is with regret that I thinned out excess turnip seedlings this morning. Not that I regretted tossing away the green tops. What I regretted was not being able to share the tops with Mac, my old neighbor. He died late last year.
Mac grew up in the South and wended his way north harvesting fruits and vegetables. He eventually

settled in the north, in a small house that practically butted right up against my garage.

You couldn’t conjure up a more disparate pairing: me, a short, white guy from the suburbs of New York City, and Mac, a tall, black guy from deep in the South. We were drawn together by our love for gardening. Perhaps I have some roots in the South (doubtful) because he and I also shared our love for okra and greens. A frequent summer refrain over the hedge separating our yards was, “How many bags of okra you got in the freezer so far?”
Mac and I always got along. When a pin oak on our property line was threatening to shade my plum trees, I hadn’t even finished my question before Mac answered, “Just take it down.” Some visitors here thought the ramshackle sheds and assorted objects scattered over his yard were an eyesore. I looked upon them as nothing more than “different strokes for different folks.”
Mac eventually moved into an apartment in town and, as he aged, his gardening capabilities diminished. But not his love for gardening, being in the garden, and eating from the garden. Each spring, he would bring me some seeds that he thought were worth growing and I would raise “starts,” as he called them, for both of us.
Because I’m partial  to the turnip varieties Purple Top White Globe and Oasis, I always got my own turnip seeds. The seeds are small and no matter how thinly they’re sown, they always come up crowding each other. So the only way to get nice, plump turnip roots is to thin out the plants when they are still young.
I like turnip greens but Mac liked them more. Every year, I’d collect the thinnings into a bushel basket, then hand them over to Mac who would sit outside his front door washing them, then cook and freeze them.