You are here: Home1 / trifoliate orange 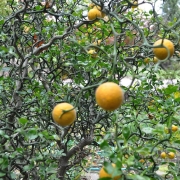 Winters have been warmer here for the past few years and, so far at least, this winter is playing out to be the warmest ever. But even the “global warming” cloud has its silver lining. Snow is great fun and cold is invigorating but one of my regrets in living in a cold winter region has been not being able to harvest fresh citrus fruits from outdoor trees. If things keep progressing in their present direction, as predicted, that situation may change.
The coldest temperature so far this winter has been down around 9° F, and three of my citrus plants still look fine. In the ground, outdoors! Technically, they are a citrus relative, Poncirus trifoliata, also known as trifoliate orange. The leaves resemble citrus leaves, the white flowers resemble and have the fragrance of citrus flowers, and the fruits, orange and an inch-and-a-half across, resemble citrus fruits inside and out. Too bad poncirus is barely edible, although it can be squeezed for juice that is diluted and sweetened to make an -ade.
Even if poncirus was not edible, it would be worth growing for its beauty, especially the Flying Dragon variety with its contorted, green (and thorny) stems and leaves.
My three poncirus plants started out as seeds plucked from a fruit on a plant growing against a brick wall in northern New Jersey. The seeds sprout and grow easily. After growing one year in pots, into the ground they went. The first couple of years, winter lows of -10° and -19° killed them back to the snow line. They’re allegedly cold-hardy below zero degrees F., but that hardiness comes with age. Also, the pattern of cold development and its duration affects cold-hardiness. This year, so far, the plants look fine from top to bottom.
Poncirus is close enough to citrus botanically that its been hybridized with citrus to make more edible, albeit less cold-hardy, hybrids. Like the citrange, from the mating with sweet orange, hardy to 5 to 10°F. A few varieties of citrange have been developed, all billed as “approaching edibility” but, like poncirus, making a good -ade.
——————————————————-
Not to give up on true citrus — yet. Probably the hardiest is yuzu, a hybrid of a sour mandarin and the barely edible Ichang papeda (C. ichangensis). Ichang papeda is the hardiest evergreen citrus. (Poncirus sheds its leaves in winter.) So yuzu is a true citrus and it is quite cold-hardy, down to about 10°F. And it is eaten. The great plant explorer, Frank N. Meyer described it, in 1914, “rind full of oil glands, smelling like a fine lemon; segments separating easily; fairly juicy and of an agreeable sharp sour taste.”
Mandarins (tangerines, C. reticulata) are also among the hardiest of citrus, and they taste very good straight up. The deep orange fruits of the variety Changsha are sweet and juicy, and I actually have a potted plant from which I’ve been trying to coax fruit for more than 5 years — or so I thought.
Today I checked the original bag in which I received cuttings of the alleged Changsha. Turns out the name scrawled on the bag is Changshou, not Changsha. Bummer, I was looking forward to Changsha. Changshou is another hardy citrus-type fruit, actually a kumquat, from the closely related genus Fortunella. Kumquats are cold-hardy to between 10 and 20°F., and are a fruit I’ve grown — indoors in winter, outdoors in summer — for many years.
Kumquats, like poncirus, hybridize readily with citrus species. Hmmm, why not combine the hardy kumquat with the hardy mandarin? It’s been done, the result of the mating being the Nippon orangequat, hardy to 10°F. and with a mild flavor, if left to hang on the plant long enough, and, like a kumquat, having an edible skin.
——————————————————–
Except for poncirus, I’m not really hoping to harvest any citrus-type fruits from outdoor plants anytime soon, perhaps ever. Surviving the depths of winter cold is one thing. The plant also has to be able to ripen its fruit within the growing season. My Meiwa kumquats, for instance, ripen in February, and I expect even a few nights in the 20s would turn the fruit to mush.
For now, then, I continue growing the more edible citrus-type fruits in pots that winter indoors. Still, poncirus, that citrus look-alike will look cool out in the landscape.
https://leereich.com/wp-content/uploads/2013/02/Poncirus-252C-flying-dragon.jpg 680 1024 Lee A. Reich https://leereich.com/wp-content/uploads/2022/12/header-home-link-247x54-2.png Lee A. Reich2013-02-01 11:55:002014-07-14 15:17:26Citrus in New York?