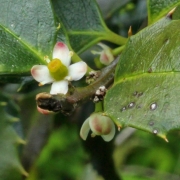 Connecting the drip irrigation to the spigot behind my compost pile today, my eyes fell on five nearby Meserve holly bushes. Which brought my thoughts back to last fall, when I realized that I’ve never seen berries on those shrubs.
Hollies are dioecious plants (“two houses”): some are male, others are female. Only the female plants bear the bright, red fruits that, along with spiny, shiny leaves, are so essential a decoration for the winter solstice. To bear fruits (which are ripened ovaries, the female flowers must be dusted with pollen from male flowers.
Last fall, I reasoned that the lack of berries could be that the plants were too young (no, I planted them over 15 years ago), that the plants were too shaded (if so, there would have been at least a few berries), that late frosts were killing the blossoms (unlikely every year), or that the planting lacked a male stud. Except that I do remember making sure to plant one male holly for the harem of females.
As luck would have it, coincidental with my connecting the drip irrigation, the hollies were in bloom. The blossoms are ornamentally insignificant but did provide the opportunity to confirm each plant’s sexual orientation. No magnifier was needed to see a swollen, green ovary at the base of the petals of each flower on all my plants. All my hollies are females.
Right away, I started thinking of where, locally, I’ve seen hollies from which I could beg a few male blossoms, assuming other plantings have some males loitering about. Male flowers on a branch with its base in water would stay viable long enough for bees or me to effect pollination.
———————————————-
Once the drip irrigation was connected, I broke tradition, neglected my own advice, and planted out tomatoes, peppers, and eggplants transplants. The date was May 19th rather than my usual end of May planting date. These plants allegedly shudder at a temperature below 50°F., which was predicted and sure to occur again. I did offer them some protection in the form of light, air, and water-permeable “row covers” held up over the plants by double metal hoops (from www.gardeners.com or, as concrete block truss reinforcing wire, from a building supply store). A single hoop over the row cover at each double hoop holds the row cover in place while allowing it to slide up and down for access to the bed.
Like holly berries, peppers, tomatoes, and eggplants are ripened ovaries — that is, fruits (botanically speaking; horticulturally and legally, they are considered vegetables. As fruits, they need pollination to develop. The flowers, in this case, are monoecious (“one house”), with male and female parts on the same plant. More than that, male and female parts are on the same flower; the flowers are all bisexual.
Pollen still has to move from the male parts of the flower to the female parts, and mostly, it’s bees that get that job done. Bees can’t get at plants within the row cover tunnels so once cold weather is reliably past I plan to uncover the rows and let bees work the blossoms.
———————————————-
Row covers can also offer protection from certain pests. Anyone who grows eggplant eventually becomes familiar with flea beetles and the holiness they impart to the plants’ leaves. New growth on vigorous plants can more than offset older leaves’ loss of greenery but flea beetles can kill weak plants. 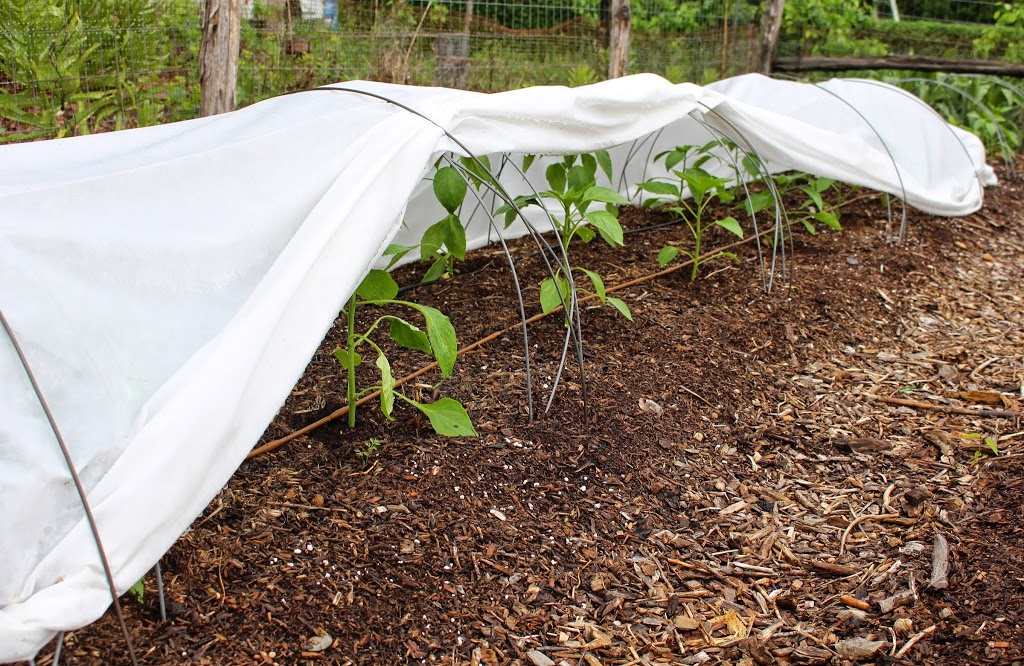 So the tack here is to keep eggplant plants under row cover until their flowers begin to open. In addition to fending off flea beetles, the additional warmth and calmer environment beneath the covering spurs growth for earlier harvest and for a plant better able to fend off flea beetles once uncovered.
———————————————-
With peppers, it’s especially important to pull off the cover just as soon as plants blossom. The atmosphere within a row cover tunnel is a few degrees warmer than ambient, which is helpful now, when some protection from cold nights might be needed. Fruit set for peppers is poor at temperatures below 58°F., so a little extra heat can improve early season fruit set.
As days grow warmer, the even warmer environment beneath a row cover can have the opposite effect. Fruit set is also poor when daytime temperatures rise above 85°F.
———————————————-
Tomatoes could remain covered throughout the season because bees are not necessary for pollination. Abetted with just a little movement — from wind for example — the mere opening of the flowers effects pollination. Night temperatures from 59 to 68°F. are best for tomato fruit set. Once night temperatures go higher than 70°F., fruit set suffers, but that’s not going to happen for a long time, even beneath a row cover.
https://leereich.com/wp-content/uploads/2014/06/Ilex-female-holly-flower.jpg 848 1024 Lee A. Reich https://leereich.com/wp-content/uploads/2022/12/header-home-link-247x54-2.png Lee A. Reich2014-06-06 14:43:002014-07-14 15:15:58Holly Needs a Male, and Cold Peppers