You are here: Home1 / pruning lilac 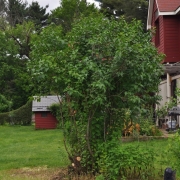 Who would look at a lilac bush, just leaves and flowers morphed to browning seed capsules, and even prune it this time of year? I would! Pruning a couple of months ago would have cut off many blossoms before they even unfolded. Pruning now, after enjoying the blossoms, is a way to keep the shrub shapely and queue up blossoms for next year. Next year’s flowers are formed on buds this summer so we can’t wait too long to prune or there won’t be enough time for the new flower buds to develop.

My lilac has suffered years of pruning neglect (quite an admission from the author of The Pruning Book, especially as relates to a plant that looks best with annual or at least biannual pruning). Every year my lilac has grown uglier and uglier, its flowers fewer and fewer, and the task of pruning it more and more daunting. On the flip side, the plant has been harder and harder to ignore.
So this week I attacked. A scythe made quick work of clearing old daffodil foliage, and weeds from around the base of the plant. Moving on to the bush itself, the most dramatic cuts came first, with a hand saw lopping a few of the thickest stems right down at or near ground level. Other thick stems got less severe treatment. Where branching was making parts of the shrub too dense, I cut off some of the branches. Down at the base of the plant, I thinned out some young sprouts so that those that remained could develop with sufficient elbow room. I also carefully unravelled and cut back as low as could be reached some poison ivy that had insinuated itself in amongst the lilac stems.
The work was slow but worth it. Like building a stone wall, pruning a neglected, old lilac is a job that can’t be rushed. Trimmed, the lilac shrub now rises up from the soil like a graceful fountain of water. Increased light within the shrub and removal of much old wood and developing seedpods should make for a good show next May.
————————————————-
A friend told me that his wife was rather frantic about aphids on some of their shrubs. Yes, aphids are plant pests, but they also are so interesting. For instance, the females — which most aphids that you see are — give birth to live young that are clones of themselves. No males or sex is needed to make those babies.
Unfettered, a single female could give rise to thousands of offspring over the course of a season, which could result in crowded conditions or having to settle for to poorer quality food. No problem. When that happens, Ms. Aphid gives birth to babies with wings so they can fly off in search of greener pastures. Come autumn, it’s time for some sex. Females then produce a few males, mating occurs, and eggs are laid that remain dormant until spring.

We’re not knee-deep in aphids, so something is keeping aphid populations in check. Cold, heat, and rain all take their toll. Aphids also have many natural predators, including fungi, lacewings, and, most familiarly, ladybird beetles.
Outdoors, I sometimes see aphids on plants but usually just wait for them to naturally die out. Their most dramatic damage effect is the red puckering they leave on a few red currant leaves. Plants can compensate for some leaf damage; I do nothing and the red currants have always been none the worse for wear. Many pesticides are especially toxic to aphid predators and I credit much of my lack of aphid problems to my avoidance of pesticides.
But my friend said aphids were killing his shrubs. He sprayed horticultural oil, a light oil formulated to smother pests but not damage plants. That’s a reasonable and benign strategy, effective if the spray thoroughly coats the plant. Other environmentally sound sprays are insecticidal soap or — my favorite — strong blasts of water. On small plants, aphids, which mostly congregate on new growth, can be merely rubbed off with your fingers.
My friend asked about buying in some ladybird beetles. That works, if the ladybird beetles stick around. Green lacewings are another aphid predator that can be purchased. An often more effective and cheaper alternative to buying in aphid predators is to create habitats that attract them. At some points in their life cycles, many predators feed on plant nectar, which is especially abundant in small, wide-opening flowers such as cilantro, dill, coneflower, coreopsis, alyssum, goldenrod, cosmos, sunflower, and other members of the carrot or daisy family.
This year is the first year that I see no evidence of aphid attack on my red currants. My guess is that the late frosts did in the buggers.
———————————————
I’d rather not have had those frosts and had more aphids because those frosts also knocked out some developing fruits. Hardest hit were apples, Asian pears, European pears, and hardy kiwifruits. Least affected were grapes and super-hardy kiwifruits, both of which fruit on secondary buds if primary buds are killed, persimmons, pawpaws, blueberries, raspberries, blackberries, gooseberries, and black, clove, red, pink, and white currants. A variety of plants is a good hedge against bad weather and other calamities.
—————————————————–
Another WORKSHOP: BACKYARD COMPOSTING. The why and the how of backyard composting, everything from designing an enclosure to what to add (and what not to add) to what can go wrong (and how to right it). Also, how to make best use of compost. Workshop will be held 9-11:30 on June 23rd at my farmden. Space is limited. Contact me for registration or other information.
https://leereich.com/wp-content/uploads/2012/06/Lilac-252C-right-after-pruning.jpg 1024 680 Lee A. Reich https://leereich.com/wp-content/uploads/2022/12/header-home-link-247x54-2.png Lee A. Reich2012-06-08 04:16:002014-07-14 15:18:03PRUNING A LILAC, DEALING WITH APHIDS