You are here: Home1 / prickly pear 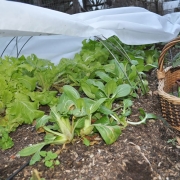 Brrrr! The mercury plummeted to nine degrees Fahrenheit in my garden a couple of weeks ago. Yet I was still harvesting fresh salad greens. And I don’t mean kale and Brussels sprouts; they’re tasty and still available in my “back forty,” but tender and succulent they are not. Likewise, I don’t mean turnips, carrots, or other root crops that can nestle in the relative warmth of the earth. (My root crops anyway were pulled and packed away into a box for winter storage.)
What I am talking about is lettuce, endive, and Chinese cabbage. These vegetables, which ARE tender and succulent, must have antifreeze in their cells to be able to remain so in the face of such cold temperatures. Actually, that’s not far off: With gradual exposure to increasingly colder temperatures, cold-hardy plants are able to move water out of their cells into the spaces between the cells, where freezing would cause less damage. Moving water out of the cells also concentrates the solution within the cells and — if you remember from your high school chemistry — concentrating a solution lowers the temperature at which it freezes. Warming weather reverses the process.
Mother Nature had a little hand from me, in the form of row covers, which are diaphanous blankets thrown over plants to offer them additional frost protection. Spun-bonded row covers let light and water pass

through. I’ve used these materials in spring and autumn for many years, but looking through the Harris Seeds catalog (www.harrisseeds.com), I came across a “point bonded row cover” which was said to give plants an additional 8 degrees or more of cold protection. That’s a lot.

A few weeks ago, I set metal arches (made from 5-foot lengths of concrete block truss reinforcement) over the rows, cut the row cover to 6 foot widths, and laid it over the hoops secured by additional metal hoops over the row cover. The material evidently is very effective; my guess is that endive and lettuce are cold-hardy to the low 20s and the row cover would bring protection down to the low to mid ‘teens. But this was 9° F.!
————————————————————–
Row covers represent a trade-off between cold protection and light transmittance. Generally, the  heavier the row cover material, the warmer the temperature under the cover and the less light reaches the plants.
So in early spring, I’ve use a 1.25 ounce cover to speed along growth of new plants. This cover lets about 70% of the sunlight penetrate and keeps plants about 3° warmer than outside the cover. In early summer, I use an even lighter weight material, 0.55 ounce, to cover my eggplants so flea beetles don’t ravage them. Eighty-five percent of sunlight makes it through this lightweight material.
The point-bonded row cover is a heavier material than row covers I’ve used in the past. Endive, lettuce, and Chinese cabbages are now snuggled under 2 ounce fabric. Only about 30% of the sunlight, which is sparse anyway this time of year, makes it through this material. But the plants are fully grown, so don’t need to grow. To just stay alive, now, they need cold protection more than light.
————————————————————–
So I’m driving along here in New York’s Hudson Valley and what do I see growing wild along the 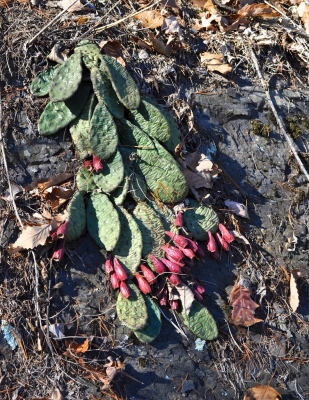 roadside? A cactus. A cactus growing wild outdoors wouldn’t be an oddity in Arizona, but New York doesn’t have the climate and soils usually associated with cactii.

The Eastern Prickly Pear or Indian Fig (Opuntia humifusa) actually grows wild throughout the eastern parts of North America. You’re most likely to come upon the plant growing in a sunny spot in well-drained soil. Not the one I found, though. This plant was growing on a rock face, which is well drained, on an east-facing slope right at the edge of woods. Not particularly sunny.
Prickly pear cactus can be oddly attractive, even edible. The pads, once the spines have been rubbed off (not with bare hands) can eaten be raw or cooked. The red fruits are also edible. The Opuntia species usually eaten is O. ficus-indica, which is not hardy in cold climates. Even that species never tasted that good to me so I wasn’t anxious to try eating any of the roadside plant. 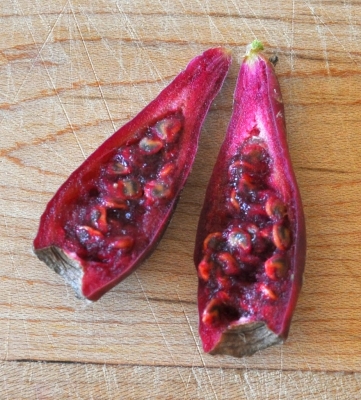 Also, in New York, Eastern prickly pear is classified as an “‘exploitably vulnerable species,’” which is a plant likely to become threatened in the near future throughout all or a significant portion of their ranges within the state if causal factors continue unchecked.”