You are here: Home1 / potted fruits 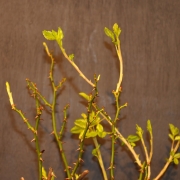 Hints of spring are evident even in the dark corners of my barely heated basement. There, buds of potted roses and pomegranate plants are starting to sprout. Some gardeners — including me — overwinter potted figs in such places and their early sprouting also can cause concern. So far, only a couple of pomegranates and roses are all that have sprouted from among the 20 or so plants in my basement.

And what are all those plants doing sitting down in my basement? Some, including the pomegranates, figs, and black mulberries, would shrivel up and die from our usual winter cold. The plants are in pots that each autumn are I carry downstairs from outside after their leaves have dropped. Other plants in the basement menagerie are normally cold-hardy, except that they are in decorative pots within which roots, which are not nearly as cold hardy as plant stems, would freeze to death if left outdoors. Larger or better insulated pots would offer roots more protection from cold.

The problem with early sprouting in my basement is that there’s little light down there. New stems on the roses are pale, stretched out, and tender “etiolated). When the plants can finally be moved outdoors, those sprouts, unaccustomed to bright light and wind, will dry out and die. If the plant has not invested too much energy in the sprouts, new sprouts can develop. Ideal conditions, for now, would be cool temperatures and the brightest possible light — preferably before the new sprouts appeared.
The pomegranates are special varieties so they get first-class treatment: into the greenhouse they go, even though space there is at a premium. The pomegranate buds were just unfolding so the bright light should not burn them.

The roses are more cold-hardy and not so special; they went into the garage where there is some light and, more importantly, it’s a lot colder than the basement. The goal is to hold back growth as long as possible while letting some light fall on what sprouts slowly develop.
———————————————-
The figs in the basement aren’t yet acting like it’s spring. The buds are swelling slightly but are otherwise still folded closed. The goal is to keep them that way as long as possible with minimal watering.

It’s still too cold in the garage for these plants, whose stems tolerate temperatures down in the ‘teens. Their roots, though, like those of other plants, would be less cold-hardy. I may end up moving the plants in and out of the garage, a sheltered nook of the terrace, and the mud room as temperatures fluctuate in coming weeks. Or perhaps I can find space for them in the greenhouse.

Easiest to care for among the subtropical plants in the basement are the mulberries. Anyone who is familiar with mulberries might wonder why I would coddle them in pots in my basement. These mulberries aren’t the run-of-the-mill mulberries that sprout just about everywhere outdoors and bear good-enough tasting fruit that is a bit too cloying.

No, in my basement is a plant of the most delectable black mulberry, Morus nigra, a  species not cold-hardy outdoors here. To my taste, black mulberry — which the black-colored fruits you see around here are not — is perhaps the most flavorful of ALL fruits. Each fruit, although the size of a nickel, packs such a whollop of flavor, a congenial mix of sweetness and tartness, that you’d think it came from a fruit the size of an apple.

Two other mulberries down in the basement are there because I’m not yet sure just how cold-hardy they are and because, if cold-hardy, I still have to figure out where to plant them. Gerardi Dwarf is possibly a variety of white mulberry (M. alba), a very variable Asian species well-established in eastern U.S. and often bearing black-colored fruits also. (This variety is sometimes listed as Morus macroura.) Whitman Farms (www.whitmannfarms.com), where I got my plant, states that the fruit of this particular variety is almost as good as black mulberry, the species, and the plant grows only 6 feet high, which makes picking and protecting from birds easy.
The other plant, Kokuso mulberry (M. latifolia) is supposed to be very cold-hardy and, as rumored on the fruit “grapevine,” very tasty. The plant is semi-dwarf and the  fruit, like the others, is dark.

The thing that makes all these mulberries easy is that they are late to awaken in spring. Mulberry’s generic name, Morus, comes from the Latin word mora, meaning delay. This sluggish start in the spring usually saves mulberry flowers from being nipped by late spring frosts, which makes mulberries bear very reliably and, as described in Fruit and Its Cultivation (1919) by Thomas William Sanders, “the wisest of trees.”
https://leereich.com/wp-content/uploads/2012/03/Etiolated-rose-sprouts-in-March.jpg 900 1024 Lee A. Reich https://leereich.com/wp-content/uploads/2022/12/header-home-link-247x54-2.png Lee A. Reich2012-03-14 10:58:002014-07-14 15:18:20HINTS OF SPRING – IN MY BASEMENT!