You are here: Home1 / oiling 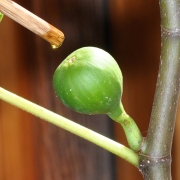 I’ve always wanted to oil the eye of a fig, and finally got around to it a couple of weeks ago. Not that oiling a fig’s eye is something new or something that I came up with; fig lovers have been oiling their eyes at least since 300 B.C.E. And our reason for doing it is to speed ripening.

My oiled fig is the variety Kadota, which grows in a pot sitting in a sunny, south-facing window. Still, the amount of light streaming through those panes this time of year is around 500 foot-candles, as compared with a 10,000 foot-candle bath from summer sunlight, which figs do love. Light intensity and duration dropping daily justified a little oiling to speed up ripening. All that’s required is a drop of oil placed on the eye — the ostiole — of the fruit. Because olives and figs share Mediterranean origins, olive oil seemed most appropriate for fig-oiling.
Although fig-oiling has been practiced for centuries, it’s not some peasant tradition without scientific underpinnings. In fact, oiling releases ethylene; this simple hydrocarbon, comprised merely of two carbon and 4 hydrogen atoms, also happens to be a plant hormone. Present at the right time at the right concentration, ethylene stimulates ripening of fruit.
Not that I had to use olive oil. Other vegetable oils also speed ripening. The more refined they are, the greater the effect.
You can’t oil just any old fig fruit and expect it to ripen. The fruit must be near enough to the time of natural ripening. The two fruit that I oiled were among the four that were large enough to be deemed by me to be ripe for ripening. In the past couple of days, the oiled fruits suddenly swelled and one is hanging flaccidly, ready to be harvested.
————————————————-
Ethylene’s magic is not restricted only to fig fruits, or even to fruits in general. Depending on timing and concentration, effects of this simple compound are far-ranging. For instance, ethylene was partially responsible for initiating the colorful display of autumn leaves a few weeks ago. Perhaps you have a houseplant whose leaves look uncharacteristically clenched and in pain. Ethylene again. Excessive watering could be the cause; roots gasping for air release a natural chemical that is transported to the leaves where it’s converted to ethylene. There, ethylene disrupts normal cell growth, with curling the result of cells in the upper part of the leaf outgrowing those that are below.
The swaying of stems under windy conditions — picture a pine growing on an exposed cliffside — also stimulates ethylene release which, in this case, results in stockier growth. I lightly brush the tops of my tomato seedlings in spring for the same effect.
This time of year, I’m paying most attention to ethylene’s effect on fruits, figs and otherwise. Apples, bananas, pears, and avocados put out a burst of ethylene just before ripening on or off the plant, and this ethylene stimulates further ripening with a snowballing effect. I keep my eye out for any damaged fruit in a bin or bag of fruits, because injuries further stoke the ethylene “fires,” speeding the transition from ripe to over-ripe. That’s why one rotten apple really can spoil the whole barrel.
————————————————-
“Ripe,” for a fruit, can mean different things to different people. Some people leave rock-hard peaches and plums on their kitchen counters to “ripen.” But not every fruit ripens off the plant, even if picked at a near ripe state. 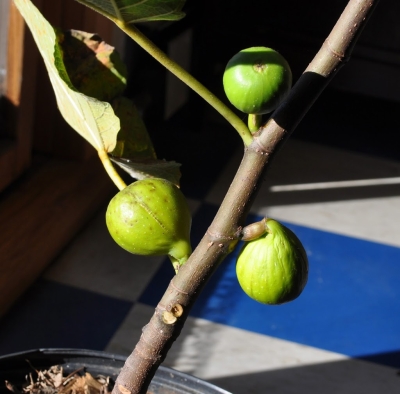 That burst of ethylene just before ripening is not characteristic of all fruits; just so-called climacteric fruits. With non-climacteric fruits, ethylene production just gradually increases as ripening occurs. Non-climacteric fruits, which include raspberries, sweet cherries, and strawberries, definitely do not ripen at all after being harvested.
Climacteric fruits do allegedly ripen — or, at least, soften, sweeten, and change color — after being harvested, as long as ripening is sufficiently imminent at harvest time. But is softening, sweetening, and color change all that a ripe fruit has to offer? No. A whole spectrum of flavorful aromatics is also waiting. Although some fruits might ripen to perfection harvested before fully ripe (tomatoes and late apples, for instance), and other fruits must be harvested underripe for ripening off the plant (European pears and avocados, for instance), many fruits, climacteric and non-climacteric, taste best if fully ripened on the plant.
————————————————-
Fig is a climacteric fruit but one that I believe tastes flat if harvested anytime before it’s dead ripe. All of which made me most interested to taste my oiled fig. Would ethylene-induced premature ripening, from a single drop of oil in the eye of the fruit, result in a syrupy sweet, richly flavored Kadota fruit, such as I’ve harvested from my greenhouse tree in summer and fall, or would the fruit look and feel ripe, but lack full flavor. Drum roll . . . flavor is flat. (That flat flavor could also reflect the seasonal cooler and less bright conditions of this time of year.)
https://leereich.com/wp-content/uploads/2012/11/Ficus-oiling-the-eye2.jpg 988 1024 Lee A. Reich https://leereich.com/wp-content/uploads/2022/12/header-home-link-247x54-2.png Lee A. Reich2012-11-22 12:29:002014-07-14 15:17:38OILING MY EYES