You are here: Home1 / Morus 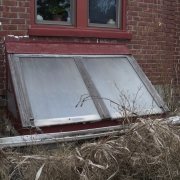 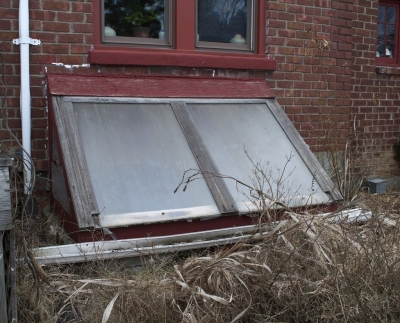 Spring is here, in my basement. Allow me to set the scene. My basement is barely heated and I replaced what once was a south-facing Bilco door with a wooden frame supporting two clear polycarbonate panels. Plants that need light and tolerate or need a winter cold period, down to near freezing, have their wishes fulfilled out there in that old Bilco entranceway.
Temperatures are more moderate there than outdoors, generally warmer except later in spring when the basement’s mass of concrete keeps things cooler than hot, sunny days outdoors. Through winter, though, the non-frigid temperatures kept pots of Welsh onions, pansies, oregano, kumquat seedlings, hellebore, olive, pineapple guavas, and bay laurel green and happy. It’s  cool Mediterranean climate down there, in winter, at least.
——————————————-

As would be happening in parts of the Mediterranean, some of the plants in my basement feel spring in the air and are starting to grow; the most exciting of the plants down there are some ramps that I was gifted last spring and potted up. Ramps, sometimes called wild leeks, are a kind of wild onion much in demand in spring. They’re one of the first greens of spring, enthusiastically welcomed in with ramps festivals in some parts of the country.
I too became enthusiastic about ramps after tasting them last spring so, of course, I decided to try to grow them — no easy proposition. Ramps grow wild on the leafy floor of hardwood forests, their green leaves appearing early in the season and for only a few weeks to feed the bulbs, after which they die back to the ground and flower stalks appear. Little is known about growing them.
My ramp bulbs have sprouted! Last week I wrote about onions and their sensitivity to photoperiod; long days make northern-types stop growing leaves and channel their energy into fattening up bulbs. The more leaves plants have before the critical photoperiod that triggers that changeover, the bigger the bulbs. Methinks: Why not apply the theory to growing ramps? By starting early, the bulbs have more time for leaf growth before whatever critical photoperiod brings it to a screeching stop. The bulbs also enjoy cool conditions, which should endure in the basement window for weeks and weeks.
If my reasoning is sound, I could get even better growth by looking to more northerly locales for ramp bulbs or seeds for planting. Because ramps originating in those parts would have to begin growth later in spring, they might need to experience even longer days before leaf growth stops. Down here, then, they’d get extra growing time before those longer days arrested leaf growth.
In fact, it is short nights rather than long days that trigger that halt in leaf growth. Under natural conditions, short days and long nights go hand in hand. I could change that by throwing a light-blocking blanket over the plants for a couple of hours at the beginning or end of the lengthening days, tricking the plants into thinking the days are still short enough to keep growing leaves.
I need to build up a stock of ramps, by bulb or by seed, to get enough plants to fool around with. Ramp seeds or bulbs are available mail order from http://www.rampfarm.com.
——————————————-
Sitting, waiting in darker areas of my basement away from the light are fig, pomegranate, mulberry, and che plants, also enjoying the Mediterranean winter. These plants lose their leaves for winter, and light generally isn’t needed by leafless, dormant plants. In contrast to my hopes for the ramps, I’m hoping for a late spring for these plants.
If fig and company get wind of spring in the air, their buds are apt to start swelling and then growing into new shoots. Which gives rise to two problems: First, that the plants then need light; and second, that the relatively wan indoor light leads to overly succulent shoots that will “burn” once plants are moved outdoors when the weather reliably warms. Most of these plants are in large pots and there just isn’t enough space in the Bilco opening for all them, even if light there was sufficient, which it isn’t.
My tack with these large, potted plants is to hold back growth as long as possible by keeping them on the dry side. And then, when outdoor temperatures warm up just a bit — with lows in the mid twenties — I’ll move them outside to, I hope, begin growth in synch with our spring temperatures. Of course, I can only do that if the plants have remained dormant when I move them out. And if temperatures plummet one or more nights, I’ll have to lug all the plants into the garage, keeping exposure to cold commensurate with growth stage of the plants.
—————————————————————–
https://leereich.com/wp-content/uploads/2013/03/Bilco-window.jpg 828 1024 Lee A. Reich https://leereich.com/wp-content/uploads/2022/12/header-home-link-247x54-2.png Lee A. Reich2013-03-07 08:36:002014-07-14 15:17:20Springtime, In My Basement